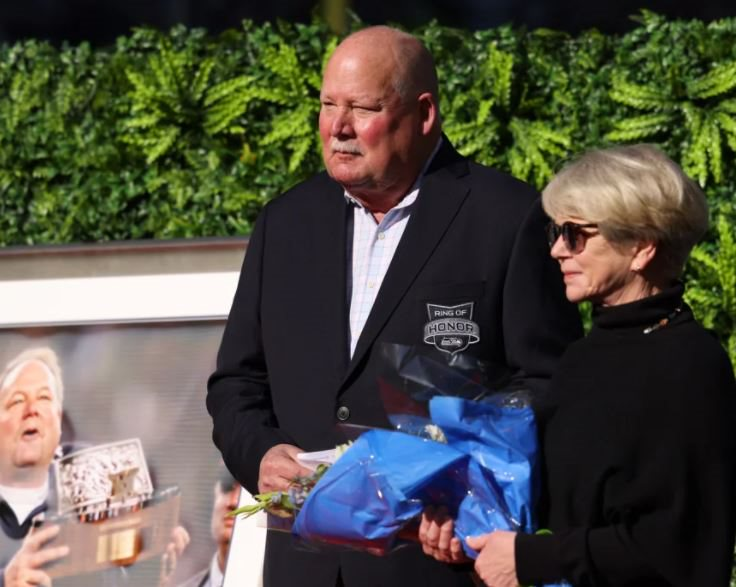 Mike Holmgren and his wife Kathy, courtesy of the Seattle Seahawks

Former head coach and lifelong Covenanter Mike Holmgren was inducted into the Seattle Seahawks Ring of Honor on October 31. The ceremony, held at halftime at Lumen Field, proved to be a notable highlight to the Seahawks’ first home win of the season in which Seattle beat Jacksonville 31-7.

Holmgren, who was raised at First Covenant Church in San Francisco and is a current member of Highland Covenant Church in Bellevue, Washington, raised the 12s flag at the pregame ceremony prior to kickoff. The flag with the number 12 on it has been raised in honor of the fans since 2003. The near-deafening applause in a stadium deemed one of the loudest in the NFL documented the fans’ love for the coach who helped the Seahawks reach new heights during his decade with the team. Holmgren led Seattle to six playoff appearances, four NFC West titles, and the first Super Bowl championship in franchise history.

Surrounded by his wife, Kathy, their four grown daughters and their spouses, and several grandchildren, Holmgren told the near capacity crowd that he thanked God every day for his wonderful family.

“This year Kathy and I celebrated our fiftieth wedding anniversary,” Holmgren said proudly. “And I’ve been blessed to have a partner who has been a constant source of love and support to me during my career.”

The Seahawks Ring of Honor is the Seattle franchise hall of fame of sorts. The 14 inductees to date include ten former players, two coaches, a broadcaster, and the late owner of the team. The first inductee was legendary Seahawks receiver Steve Largent in 1989. The second inductee was Covenanter Jim Zorn in 1991. Zorn was the Seahawks quarterback from 1976 to 1984. He and his wife, Joy, are members of Evergreen Covenant Church on Mercer Island.

Greg Asimakoupoulos is the chaplain at Covenant Living at the Shores on Mercer Island, Washington.