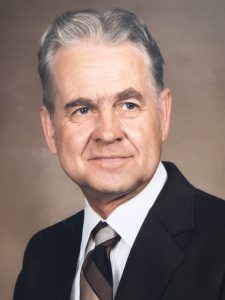 Jerry was born to Swedish immigrant parents on September 25, 1924, in Spooner, Minnesota. He accepted Christ at the age of ten through the home mission work of the Northwest Conference of the Evangelical Covenant Church. Jerry grew up with three brothers on a small grain farm along the Rainy River.

After high school, he was engaged in farming and logging for several years. He married Esther Carlson in 1946 after meeting her as a teen at a church event and dating for several years. He attended Northwestern Bible School in Minneapolis and graduated from its Bible and missionary training program. Jerry began preaching as a teenager and proclaimed the gospel in Covenant churches for more than 75 years.

He attended North Park Seminary and was ordained in the Covenant in 1955. He and Esther served churches in Minnesota, Wisconsin, Iowa, California, Oregon, and Alberta. He was elected superintendent of the Covenant churches in Canada where he served until his retirement. During retirement he conducted interim ministry in eight churches.

Jerry had a life-long love of forests and logging. Little did he know when God called him from his logging business in northern Minnesota into ministry that he would build three church buildings, one of which included harvesting the trees that became the lumber for that building. For the new addition on another church, it meant sawing ash and walnut logs from the church property on his mill. That lumber was made into beautiful furniture for the fellowship hall. Over the years he also built three homes and the family log cabin.

He was preceded in death by his parents, three brothers, and a son-in-law.