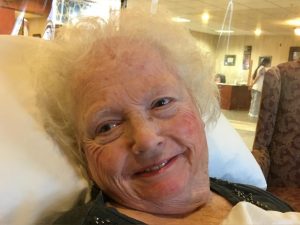 Ingrid was born at Swedish Covenant Hospital in Chicago on August 3, 1937, to her Swedish immigrant parents, Gunnar and Ruth Engblom. She and her sister, Evelyn, grew up in Chicago. Starting at a young age, Ingrid loved performing and singing at church. She graduated from North Park Academy in 1955 and went on to Swedish Covenant Hospital School of Nursing, where she graduated as a registered nurse in 1957.

She met Loren while he was studying at North Park Theological Seminary. They married on June 13, 1959, at Immanuel Covenant Church in Chicago, and served churches in Minnesota, California, Michigan, and Connecticut. They had three children, and as a young mother, she pursued her special certification as a pediatric nurse practitioner at the University of Michigan.

The highlight of her career was providing care to the students and families at the Developmental Learning Program (for students with autism) at Burger School in Garden City, Michigan. In 1987, Ingrid received the Family Support Award from Wayne County Society for Autistic Citizens for her outstanding service to the families of persons with autism.

In her free time, she loved swimming, water skiing, and running. As a pastor’s wife, she was a consummate hostess and loved entertaining people. Ingrid’s love of singing continued throughout life as a soloist and as a member of various church and community choirs. The love of music and singing was shared by many family members, including her husband, Loren, sister Evelyn, and brother-in-law, George, who formed a quartet that sang for many family gatherings.

Ingrid often talked about how much she loved her summers as camp nurse at Portage Lake Covenant Bible Camp in Onekama, Michigan. Her love of God, and her desire for others to know his love, was a significant aspect of her life.

In 1990, at age 52, Ingrid suffered a major stroke that paralyzed her right side. The resulting severe impairments prevented her from being able to work. She learned to walk again, as well as continue her love for acrylic and oil painting (now with her left hand). Loren was her devoted caregiver for six years until his untimely death from pancreatic cancer in 1996. Despite this deep loss, Ingrid lived the next 25 years with fortitude, receiving the nickname “Energizer Bunny” from her family.

Ingrid is survived by her three children, Sheri Peterson (Scott), Susie Williams, and Tim (Jennifer); six grandchildren; her sister, Evelyn Elia (George), and sister-in-law, Janet Anderson. She was preceded in death by her parents, her husband, Loren, and brother-in-law, Merlin.