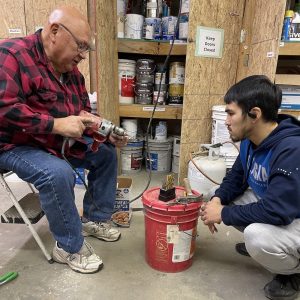 Jeff Siemers, executive vice president at the college, says, “ACC is committed to the traditions and heritage of the Alaska Native peoples. We acknowledge the past, honor the culture, and celebrate the future of indigenous peoples. The land, the language, ways of knowing, and indigenous values are incorporated into the celebration of the people.”

Festivities included a Native Youth Olympics skill-building showcase with traditional competitions such as one-foot high kick, one-hand reach, and seal hop, where competitors hop in pushup position across the floor.

The community shared in eating moose stew, fry bread, and akutuk, Eskimo ice cream made of reindeer fat or tallow, seal oil, snow or water, fresh berries, and sometimes ground fish. Akutuk is whipped by hand so it cools into a foam.