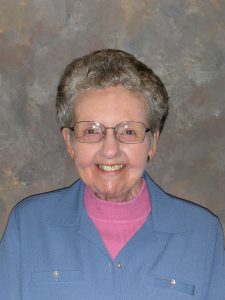 Dorothy was born in 1920 in Providence, Rhode Island, to Robert and Esther Johnson. She attended Brown University and the Katherine Gibbs Secretarial School.

She married Phil in 1944. While he was attending North Park Theological Seminary, Dorothy was secretary to school deans Nils Lund and Eric Hawkinson.

They served Covenant churches in Chicago; Buffalo, New York; Kingsburg, California; Omaha, Nebraska; and St. Petersburg, Florida. After Phil’s retirement from pastoral ministry in 1989, they moved to California where Phil served for five years as the first full-time chaplain at the Turlock Covenant Living Community.

Interment will be at Turlock Memorial Park at a later date.