How One Church Is Welcoming 100s of Fire Evacuees

For two weeks, Bayside Church of Placerville has been hosting up to 100 evacuees a day from the Caldor Fire, and served more than 12,000 meals to the surrounding community in northern California, said pastor Al Soto.

As of August 30, the fire had burned nearly 200,000 acres since it started on August 14 and its continued spread forced the evacuation of 50,000 people from Lake Tahoe. Federal officials closed all national parks in California through September 17 due to high fire risk throughout the state. 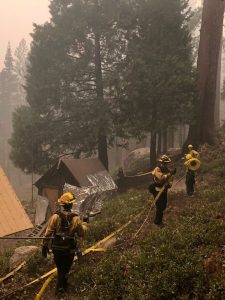 Relief efforts at the church, which is located east of Sacramento, began when a local official called Soto at 6 a.m. on Tuesday, August 17, to let him know that people would be coming from nearby areas, including Grizzly Flats, much of which was destroyed. By 2 p.m. the church was receiving evacuees.

“We are rallying around the phrase, ‘Not a crowd but a community,’” Soto said.

Among the people being sheltered is a man with stage 4 cancer who is receiving hospice care. He and his wife were evacuated in the middle of the night and brought to the church because there was no room for him at the hospital. The couple has been staying in the church youth room, where his hospice care has continued.

“We are looking to get him relocated to a better situation, and people are saying they would fund it so this man can get into a place that is medically better for him,” Soto said.

Many of the evacuees have helped with ongoing efforts, including cleaning the space every two hours. “An older couple came in and said, ‘We lost our house in Grizzly Flats, but we woke up this morning, and we have two arms and two legs and a heartbeat, and we want to serve,’” Soto said. “They cleaned restrooms and showers for two and a half hours, and then she came back and thanked me.”

People have been staying in RVs, trailers, tents, and in parts of the church. The church has worked with local agencies, businesses, and other congregations to provide tents, food, clothing, and numerous other supplies. Soto said a cluster of Latino churches delivered half a ton of water.

The experience is exacting an emotional toll, Soto said. “People are grieving and experiencing all kinds of emotions. We have chaplains, including our law-enforcement chaplains, who have been here helping us. It’s every day and it’s every minute of the day because as people come through the distribution area, they’re crying. Yesterday, a little girl came up to me and said, ‘Pastor, could you pray that my house doesn’t burn down?’” 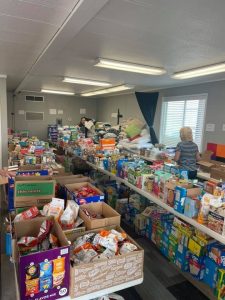 The congregation has been dependent on donations, some of which have come from farmers bringing produce. “We are taking item donations from all over the community and state, organizing them, and allowing evacuated people to come and ‘shop’ for free,” Soto said.

The church is posting regular updates on its Facebook page, including a list of needed items and a request for additional volunteers.

Thanks to donations from area businesses, the church has been able to bring in portable showers. Jeremiah Fair, pastor of Community Covenant Church in Scotts Valley, California, delivered mobile showers it had purchased after it hosted evacuees from a nearby fire for more than a week last year.

Soto said at least three people from his congregation have lost their homes to the fire, and others are waiting to be able to check on their residences.

Officials have told Soto it still may be several weeks before people can return to their communities. Even if homes are standing, smoke and other damage likely could make homes uninhabitable for at least six months.

Some of the people who have sheltered at Bayside have given their lives to Christ while at the church, Soto said. Two were baptized last Sunday, and at least another 10 are seeking to be baptized this Sunday.