Local Covenant congregations in the New Orleans area, coordinating with the denominational team, are preparing to respond to the devastation left by Hurricane Ida. The deadly Category 4 storm hit landfall this morning, battering southern Louisiana, leaving the entire area without power, and causing damage that one official referred to as “Katrinaesque.”

It is the 16th anniversary of Hurricane Katrina. 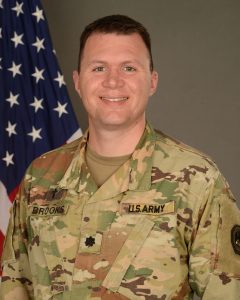 Prior to Ida hitting, members of local Covenant congregations were among the many making long, slow journeys in snarled traffic that extended far beyond New Orleans to escape the storm. Page Brooks, the lead pastor of the multi-campus Canal Street Covenant Church in New Orleans, said it took his wife and children 10 hours to travel to Montgomery, Alabama, which is normally a four-hour drive.

Brooks said most members evacuated, although some stayed behind because they had ridden out other storms.

Brooks is the state command chaplain for the Louisiana Army National Guard and has started coordinating chaplains across the state to respond to the disaster, especially in areas that were hardest hit. Another member of the church is a chaplain with the New Orleans Police Department and stayed to participate in their response.

Brooks has helped coordinate the responses of chaplains in other disasters, including massive flooding that occurred in 2016. At the time, he and four other chaplains served the largest brigade in the state and ministered to 1,600 soldiers as they helped people who had lost their homes, some of whom were still traumatized from Katrina.

Lee Cormier, pastor for Canal Street’s campuses, wrote on Facebook prior to the storm hitting, “We don’t know the extent of the damage that Ida will cause, but we know that it will be tough and there will be many needs. As a church family I fully trust that we are going to meet the needs of those in our church, our community, and beyond.”

Michael Hitch, founding executive director of the Restoration Initiative for Culture and Community (RICC), a ministry of Covenant churches in the area, said his group is in contact with Midsouth conference superintendent Garth Bolinder, as well as Paul Robinson, executive minister of the Covenant’s Love Mercy Do Justice mission priority, regarding response plans.

The RICC oversees several social enterprise ministries, promotes racial reconciliation, and offers counseling and other services. The churches have provided post-disaster assistance multiple times. Information will be posted on how Covenanters can help once they have assessed the damage.

Relief and recovering efforts will need to be massive, state officials have said.

To support relief efforts, give here and choose ‘hurricanes’ in the dropdown menu