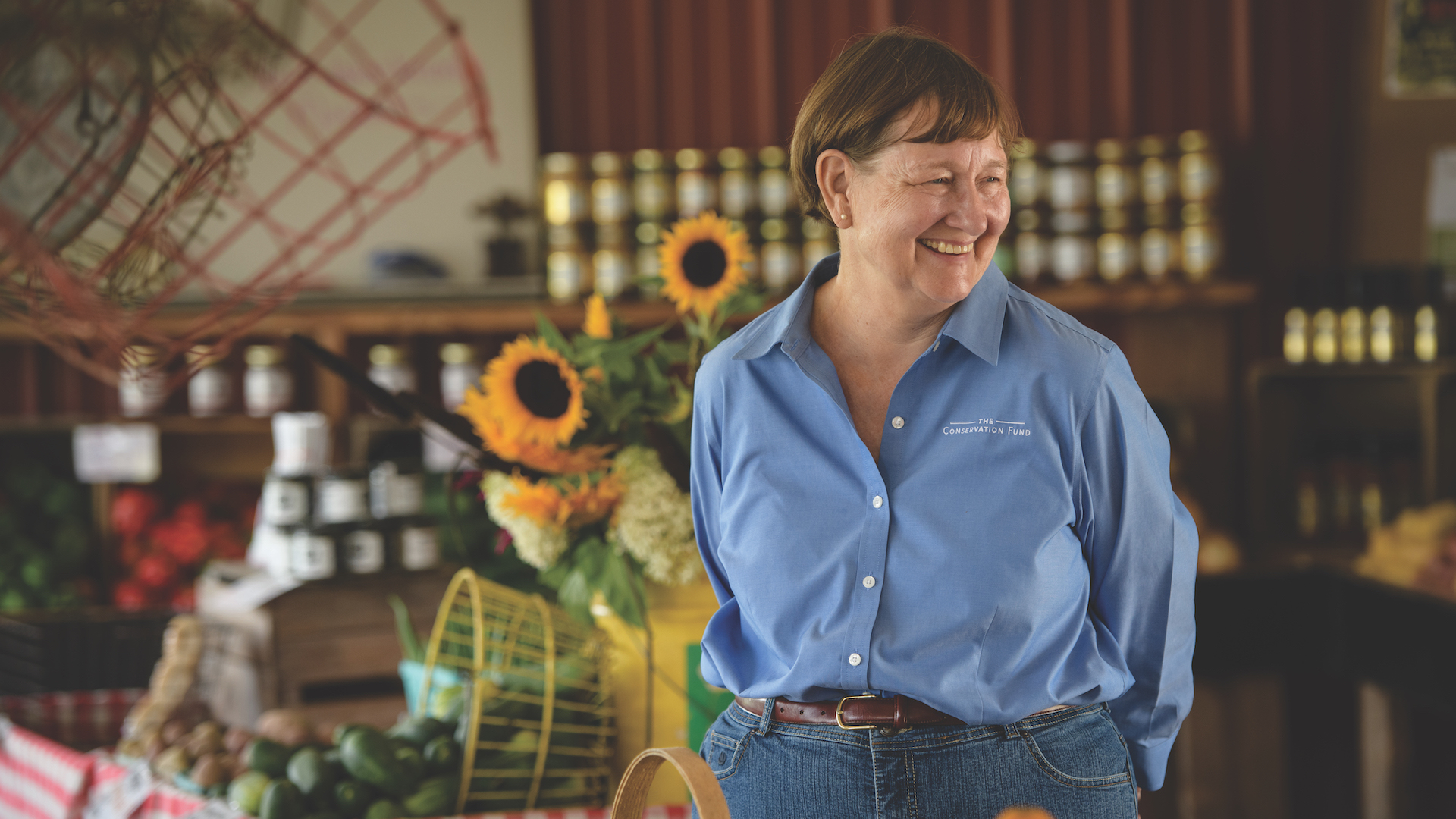 Under the Vine and Fig Tree

A Pastoral Call to Tend the Land and the People

Peg Kohring comes from a long line of farmers who were once part of the Welch’s grape juice cooperative. “We depended on the workers who came to trim the grapes,” Kohring says. “But my mother noted that none of the people of color were landowners. She wondered how we could help change that.” Kohring lived with that question for the next 30 years—until she could be part of that dream.

A chance encounter as a teenager set the course of Kohring’s life work. At 18 years old, she was working at a botanical garden in Michigan. One day when she was collecting seeds along the Amtrak train line, she encountered a man who worked for the railroad company. He was bulldozing the prairie. She told him to stop.

“The man looked at me and said he was going to call his supervisor. I nodded and said that was a good idea,” she says.

The Amtrak supervisor came riding down the track in a pickup truck. He had a large handlebar mustache and a gruff demeanor. “I asked him why he was bulldozing the prairie and proceeded to tell him how rare and important the prairies were.”

Surprisingly, he listened to the impassioned teenager and invited her to ride the rails with him to point out other prairie sites. They ended up making a verbal agreement that if Kohring kept the brush out of the six areas she’d pointed out, he would not bulldoze them.

“I kept the brush cleared out until I graduated from college,” she says. At that point she asked Amtrak if they would grant her a formal lease for that land. They refused but told her if she could find an organization to take the lease, they might consider that.

So Kohring approached the Nature Conservancy, a global environmental nonprofit with local chapters throughout the U.S. with her request. She accomplished two things: the prairies were leased, and they offered her a job in land conservation.

The experience taught her a valuable lesson, she says: “The best way to get something done is to work in the company rather than trying to stop bulldozers on the land.”

Years later Kohring’s children were attending the Half Day Program at Harbert Community Church, a Covenant congregation in Harbert, Michigan. The program provides elementary students a place to go on school half-days or early-dismissal days.

“It was a lifesaver when the school was closed,” she says. “Not only did the kids have a safe place to go, but they went on amazing field trips.”

One day she was asked to lead a nature walk for the kids. “I figured that was the least I could do to thank the church for caring for my kids.” After the walk, someone invited her to church.

“I thought it would be like the Rotary Club or a social service agency. It was a weird experience. People spoke in what felt like a foreign language to me. Pastors Kyle and Lindsay Small invited me to a Bible study. I floundered trying to find the book of John, and I asked why they gave me a book that was not in alphabetical order?”

Over the course of that year she became a Christian. She was baptized the following Easter in 2008.

Around that time a headhunter called Kohring about a job opportunity in Texas. “I told Pastor Kyle that if they offered me the job, I was moving. Pastor Kyle said, no, I was going to seminary. I told him no way. He said, ‘Go home and pray about it.’”

Two weeks later she was enrolled in Western Theological Seminary in nearby Holland, Michigan.

The more she learned about the Covenant, the more she realized it was a better theological fit for her. She transferred to North Park Theological Seminary where she says she found her home. But she wondered, “What in the world would God do with someone in land conservation?”

She was ordained by the Covenant in 2018. Today she serves bi-vocationally at Harbert Community Church’s Neighbor by Neighbor Program and as senior associate for the Conservation Fund, which works with partners to protect land and water resources through sustainable community and economic development. They also do leadership training, emphasizing the integration of economic and environmental goals.

Everyone should have their own vine.

Sawyer, Michigan, where Kohring lives, is often viewed as an idyllic spot where wealthy Chicagoans own second homes. But her work with Neighbor by Neighbor focuses on other local residents.

Many work seasonal jobs, which means they are only employed seven to nine months a year. “Many people live in perpetual poverty,” Kohring says. “They have extremely low retirement income and there is a lot of food insecurity. There are many undocumented workers. Living on $600-$800 a month, people can’t afford to buy food.”

Serving as a link between those in need and social service agencies, Neighbor by Neighbor partners with Harbert Community Church and other local congregations. In January 2020, Neighbor by Neighbor had 150 clients for whom they paid electricity, rent, mortgages, car payments, and food. By last December, they had served 752 people and had raised $240,015.

Kohring’s life verse is Micah 4:4: “Everyone will sit under their own vine and under their own fig tree, and no one will make them afraid.” Her greatest desire is for humans and the earth to be cared for and given respect, equality, and dignity. That guiding philosophy takes her far beyond southwest Michigan.

A few years ago, her work with the Conservation Fund took her to a Pueblo tribe in New Mexico who were asking for help acquiring land. The tribe lives on a small reservation of about 2,000 acres, where 200 families grow maize in the bottomlands. To fish, they needed access to a stream that originated in the mountain 15 miles away. Deer lived in the uplands, and piñon nuts grew there as well. The tribe was seeking to return to a traditional diet that is healthy, not full of sugar, fat, and flour. Regaining that land would be one potential solution to problems of diabetes and obesity.

“There was a group of really bright young people whom I came alongside to teach land negotiations,” Kohring says. “I did not want to be one of those outside experts who come in with expertise and then leave. My job was to guide the community to learn how to acquire land themselves.”

Unfortunately, the family who owned the land decided not to sell it. But, Kohring says, “The Indigenous leaders learned how to find who owned land, how to make an offer, and how to approach a landowner.“

Another project took her to Hawaii to work with Native people there when a nonprofit working on one of the outer islands approached the Conservation Fund, asking for help to lease and manage one of the watersheds. “For Native Hawaiians, their traditional source of food goes from the top of the ahupua’a, or watershed, into the sea. Part of the challenge is trying to reclaim the area where they were fishing,” Kohring explains.

Many generations ago Native Hawaiians formed a large pool with lava rock in the ocean. Water flows into the 60-acre pool, which brings in fish, a vital food source. Ancient taro beds on land need to be restored, and invasive species need to be cleared out for vegetation to thrive. “It will take a long time to restore the food production in the ecosystem,” Kohring says, “but the Native Hawaiian staff is incredibly smart and dedicated.”

Kohring is quick to name the opportunities she brings to the table. “I know it is due to my white privilege that I know foundations, government, and systems that can help make connections. So I make the introductions and help train the people I work with to make those connections themselves.”

Currently, she is working on “heirs property” in the American South. After the Civil War, formerly enslaved people received 40 acres of land and a mule from the federal government. Within months, President Andrew Johnson overturned the order, and thousands of African Americans were forced to either leave the land they had begun farming or become sharecroppers. Only a few African Americans were able to retain their land or purchase farmland of their own. That land has been passed on to succeeding generations, dividing ownership among many individuals. Sometimes 60-90 people own acreage on the same property.

“These transactions were not formally documented by wills or leases were never legally transferred,” Kohring says. “Without proper deeds and legal documents these landowners are not able to use the U.S. banking system to borrow money to tend to their land or access assistance programs through the Department of Agriculture. Adding to the complication, heirs don’t have to have a family agreement to sell the land, so one owner can sell the land out from under others.”

“The system is rigged against the African American landowner,” Kohring says. And when lawyers refuse to work with African Americans, they lack access to the entire legal system. She is currently working with about 160 families across South Carolina, North Carolina, and Georgia, with more work underway in West Virginia. She is helping landowners understand their rights of ownership and what deeding looks like. And she teaches them how to get the necessary legal help to secure their property.

“It is an honor to be able to work with families who really love their land. So much about land is dignity, giving people access to their own food and their land.”

Kohring’s faith is deeply integrated with her conservation work. “God cares for every individual. I need to use the skills I have to help people who don’t have the advantages I have had. I want to help level the playing field in very racialized geography. I love being able to take my experiences nationwide and then bring them home as a pastor.”

She concludes, “Everyone should have their own vine.”