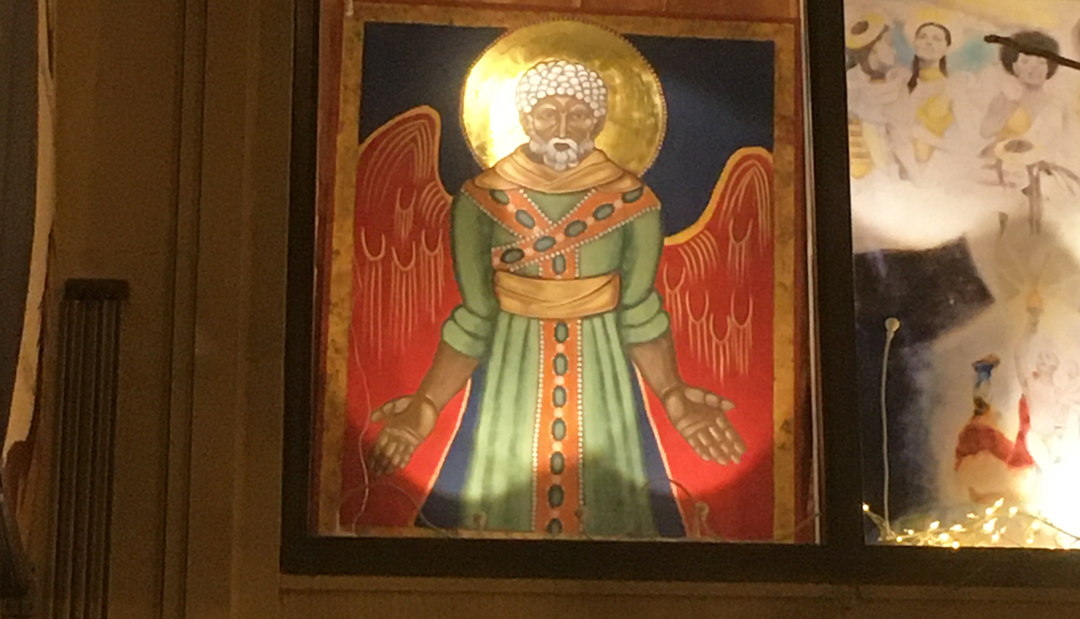 Engaging with Privilege and Complicity in a Safe Space

In response to her participation in an Antiracism Discipleship Pathway, Deb Strahan painted this 4’ x 5’ icon as part of the 2020 Advent Calendar window display at JPUSA’s community center in Chicago. “I wanted our POC neighbors to look up at the story of the birth of Jesus and see people who looked like them,” she says. “I chose to make the angel an older Black man with his arms outstretched in welcome.”

When a member of our pastoral team approached me about joining the Antiracism Discipleship Pathway (ADP) for Covenant pastors, my first thought was, “Oh no. Another commitment to add to my calendar.” After all, I had read the books on white privilege and racism that our church scheduled to read together. I was beginning to understand and accept my own complicity in racism. I am a nice person. I have never made a racial slur.

It was a year-long program, but I agreed.

Most of the people in my cohort were younger than me. They were in a different stage of life than I was. Some lived and preached in predominantly white spaces, and they seemed to know one another from different contexts. I felt like an outsider. Everyone was very nice and welcoming, but I chose to use that feeling, while it lasted, to ponder what it felt like to be the one outsider and pray into it. I tried to imagine what it is like to be the one person of color in an all-white space.

As a 66-year-old pastor, I was invigorated to hear the stories of younger pastors wrestling with how to be antiracist—making hard decisions about how to live that out in both their personal lives and their ministries. The moms in the group talked about how to talk to their children about racism, and one member who develops faith-based materials to help children respond to racism was a helpful resource. They wondered how to ease their congregations into thinking differently about antiracism or continue the momentum already established. Talking about our own complicity in a safe and protected space with trusted and committed colleagues has been helpful in opening my mind, owning my racism, and moving forward.

Every month I took notice of how my own racism appeared in everyday life. Sometimes it was revealed in a visceral response, like drawing my purse a little closer as a Black man approached me on the street. Other times I was challenged to look at my own heart and beliefs regarding how I help others in my work and ministry.

In my work at Friendly Towers, a mission business of Jesus People USA (JPUSA) in Chicago, I wear many hats: a member of the management team, in-house chaplain for our tenants, art group leader, and all-around listener and holder of hands through difficult times. One aspect of my ministry is managing housing for 90 older adults with very low income, some of whom were homeless prior to coming our way. I have been doing this for nearly 20 years, but I began to rethink how I helped those around me.

I had always been fond of saying I am a voice for those whose voice is not heard. I don’t say that anymore. That statement assumes that people of color, the elderly, or differently abled people do not have a voice and that they somehow need mine.

On a pastoral call not long ago, I was sitting at the hospital with one of our tenants, an elderly Black woman who was dying of cancer. The attending doctors asked me questions about her care, and I continually referred them to her, as she was right there in the bed. At one point the doctors described a needed procedure that was very frightening for her and they were impatient to get her to sign the release. It was clear they were hoping I would convince her. Rather than try to talk her into it as I might have done before participating in ADP, I asked for some time alone with her. I helped her to understand the procedure, which would in the end make her more comfortable and relieve some pain. She decided to let the doctors proceed, and she used her own voice to tell them.

My time with ADP has helped me see that my attitude has sometimes been more rooted in “doing for” than advocacy. In the end, I did what I do best and held her hand through the procedure. It was revealing to me how much the doctors looked to the white professional in the room to make decisions for the patient without considering her ability to speak for herself. I am continually learning how to use this white skin of mine, which gives me so much privilege and power, in a way that does not speak for my POC brothers and sisters, but amplifies their own voices.

Before the Antiracism Pathway, when we received applications for housing with any kind of criminal record listed, I would think, “Well, if the police stopped him, he must have been guilty of something.” Thankfully, a Black colleague I work with on the management team at Friendly Towers was able to speak truth into these situations to help me better understand. Having spent time learning about mass incarceration in the United States, I am now convinced we must look deeper when we see a criminal record. It may not change the outcome, but the story must be given a place to be heard.

The ADP program is simple: engage with the books,
articles, or videos, engage in the spiritual practices offered,
and talk about your experience with colleagues.

The harder work is the inner work.

In White Fragility, Robin DiAngelo writes, “One of the greatest social fears for a white person is being told that something that we have said or done is racially problematic.” As a result of the pathway, I am less worried about making a mistake or looking foolish. A member of our cohort said that she believed waiting until we are sure we can say it right or do it right is another aspect of white privilege. While we are trying to get it “right,” people of color are in urgent and dire circumstances. While we can wait, they cannot.

I have noticed the fruit of these lessons recently in spiritual direction sessions that I lead. I have two directees who are people of color. Prior to the pathway, I believe I would have been reticent to talk with them about the many instances of violence and racism we have been witnessing. I would have asked myself, “What if I ask it wrong? What if I offend them? Will they think I’m racist?” Now I am less hesitant, and I recently asked each of them how they were doing after the most recent events. I feel better equipped to hold space for people of color—partly because I realize there is so much I don’t know! While I may not be perfect in my listening, I am paying attention. I am also rereading books from my spiritual direction training at North Park Theological Seminary dealing with holding space for POC, because I am coming at it from a different perspective now.

In my JPUSA church community, six pastors are participating in ADP cohorts. Two of us, along with two members of JPUSA, adapted a two-part pathway for church members who are also seeking racial righteousness. Thirty-two people signed up for the September through December session and 28 continued January through May using the Kingdom Mosaic: Life Together series offered by Love Mercy Do Justice. We met monthly in small groups, and I have been encouraged by the number of folks who have stayed with the program all the way. Many of us recently attended a bystander intervention training offered by Asian Americans Advancing Justice, based in our neighborhood. Every Sunday afternoon since the murder of George Floyd, JPUSA members have held vigil on the street outside our building, with signs bearing the names of people of color killed by police.

The pathway focused on a number of racial issues. The module on the brown church brought injustice at the border into better focus for me. It is easy to numb ourselves to the suffering we hear in the news every day—easy, as a white person, to turn away and get back to business as usual. The Asian American Pacific Islander module opened my eyes to history I had never known and has informed how I listen to my AAPI brothers and sisters. These histories of racial injustice are painful and they are not new and did not just now surface. They have always been present, but as a white person I had the privilege to never look too closely, or at all. The knowledge I have gained has taught me empathy in new ways.

The ADP program is simple: engage with the books, articles, or videos throughout the month, engage in the spiritual practices offered, and talk about your experience with colleagues. The harder work is the inner work. It has been formational. I love better in so many ways. I feel part of the flow of change in our church rather than an onlooker.

The Barna Group recently concluded a study in collaboration with Covenant sociologist Michael Emerson and the Racial Justice and Unity Center, funded by the Lilly Endowment, called Beyond Diversity: What the Future of Racial Justice Will Require of U.S. Churches. One of the most sobering statistics in the study is that only one in five white Americans has an understanding of racial dynamics and is motivated to address racial justice. That number is even lower for white Christians—about one in ten.

We can do better. We must do better. Pastors, of all people, must educate ourselves and lament what racism has brought into this world, and how it renders the life of our collective witness impotent. Racism, white supremacy, and the Doctrine of Discovery are all part of the history of the church. It is up to us to become aware and allow the Holy Spirit to change us and change our congregations. We need look no further than the whitewashed history being taught in our schools or the people of color dying at the hands of police, or poverty, lack of housing, or healthcare to see the present-day effects. To engage in antiracism is the unique work of the American Christian.

Some pastors I have talked to have been unsure about the Antiracism Discipleship Pathway. I want to encourage them to move forward. Begin with the ADP and learn alongside your colleagues. Be willing to engage in the deep inner work. Be willing to take a risk. Come together as a community of believers who, with the help of our kind and loving Holy Spirit, will make a difference in this world together.

The Antiracism Discipleship Pathways (ADPs) are yearlong formational experiences intended to facilitate spiritual growth and deepen understanding of racial righteousness. These pathways are a collaborative partnership with Love Mercy Do Justice, North Park Theological Seminary, the Covenant Ministerium, and pastor and facilitator Jedidiah Kim to provide an opportunity for Covenant pastors to build community and fellowship with ministerial peers who are on the journey to love God and their neighbors more faithfully.

The first pathway, which concludes this summer, included 375 participants in online cohorts under the leadership of trained Covenant facilitators. Through personal assessments, books, films, videos, spiritual practices, praxis exercises, and reflection questions participants developed deeper connections with the lived experiences of their Covenant sisters and brothers.

Deb Strahan is a licensed Covenant bivocational pastor and holds certificates in spiritual direction from North Park Theological Seminary and the Ignatian Spiritual Exercises from Loyola. She and her husband of 45 years have been part of Jesus People USA since 1978. They have two married daughters and two amazing grandsons.