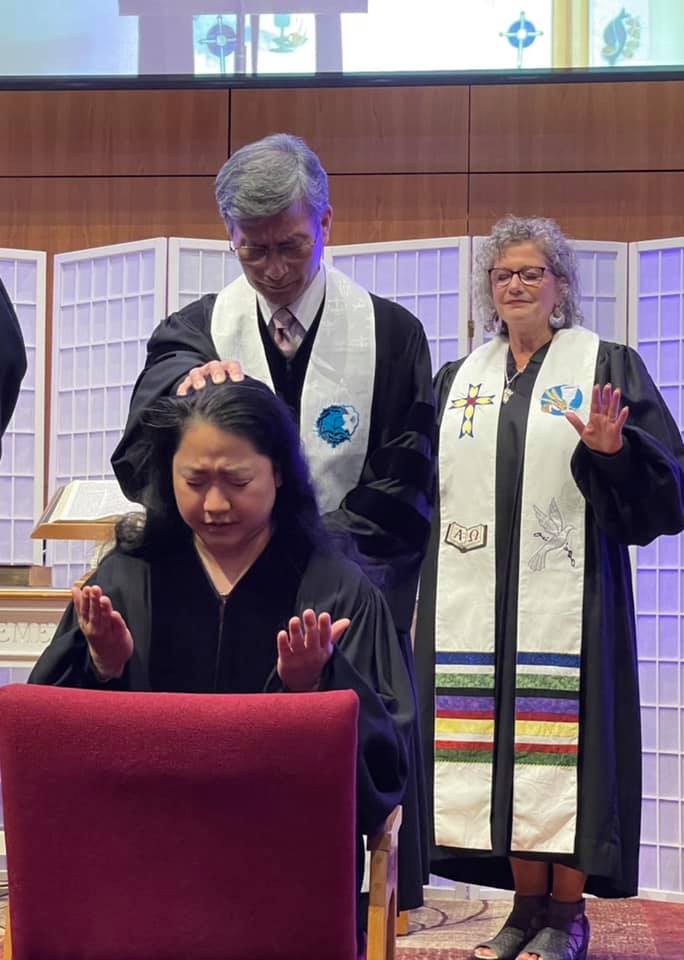 Sandra S.K. Lee has helped hundreds of people navigate the  credentialing process as the administrative manager for the East Coast Conference of the Evangelical Covenant Church. On Saturday night, she stood beside several of them as she was ordained to Word and Sacrament.

Lee, who has worked at the conference office since 2015, gathered with three other ordinands from the conference at Bethany Covenant Church in Berlin, Connecticut, as part of the Covenant’s first-ever virtual Service of Ordination, Commissioning, and Consecration

In her role, Lee helped those who stood beside her through the complicated credentialing process as she had the 17 others in the conference who participated from different sites on Saturday. “Helping pastors with ministry call and discernment is something that I love to engage in,” Lee said. “Being ordained is a communal and familial affirmation of God’s call on my life.”

During the service, Lee knelt as her father, Pastor Suk Hyoung Kim, laid hands on her. Lee was a child when her father planted a church in the Korean Evangelical Church. Her brother is U.S. Navy Chaplain David Kim.

Before attending seminary, Lee was working as a social studies teacher, while she was also deeply involved in local ministry as well as helping arrange mission trips. She felt a call to “walk alongside ministers” in their calls and decided to attend Gordon-Conwell Theological Seminary, where she was one of only a few women on the Master of Divinity track.

She graduated as class valedictorian and won the preaching award. She graduated in 2004 and soon went to work as the executive assistant for the chair of Lausanne Congress on World Evangelism, which promotes world evangelism. She also served as managing editor of the Atlas of Global Christianity.

Associate superintendent Barbara Ettinger said she was thrilled Lee was being ordained alongside others she has helped. “Sandi has been growing in her pastoral identity as she shepherds candidates through the Commission on Ministerial Standing process,” Ettinger said.

Lee, who initially viewed herself helping people in the area of academics studying world mission, said she plans to continue to work at the office but says she is open to wherever God may call next.