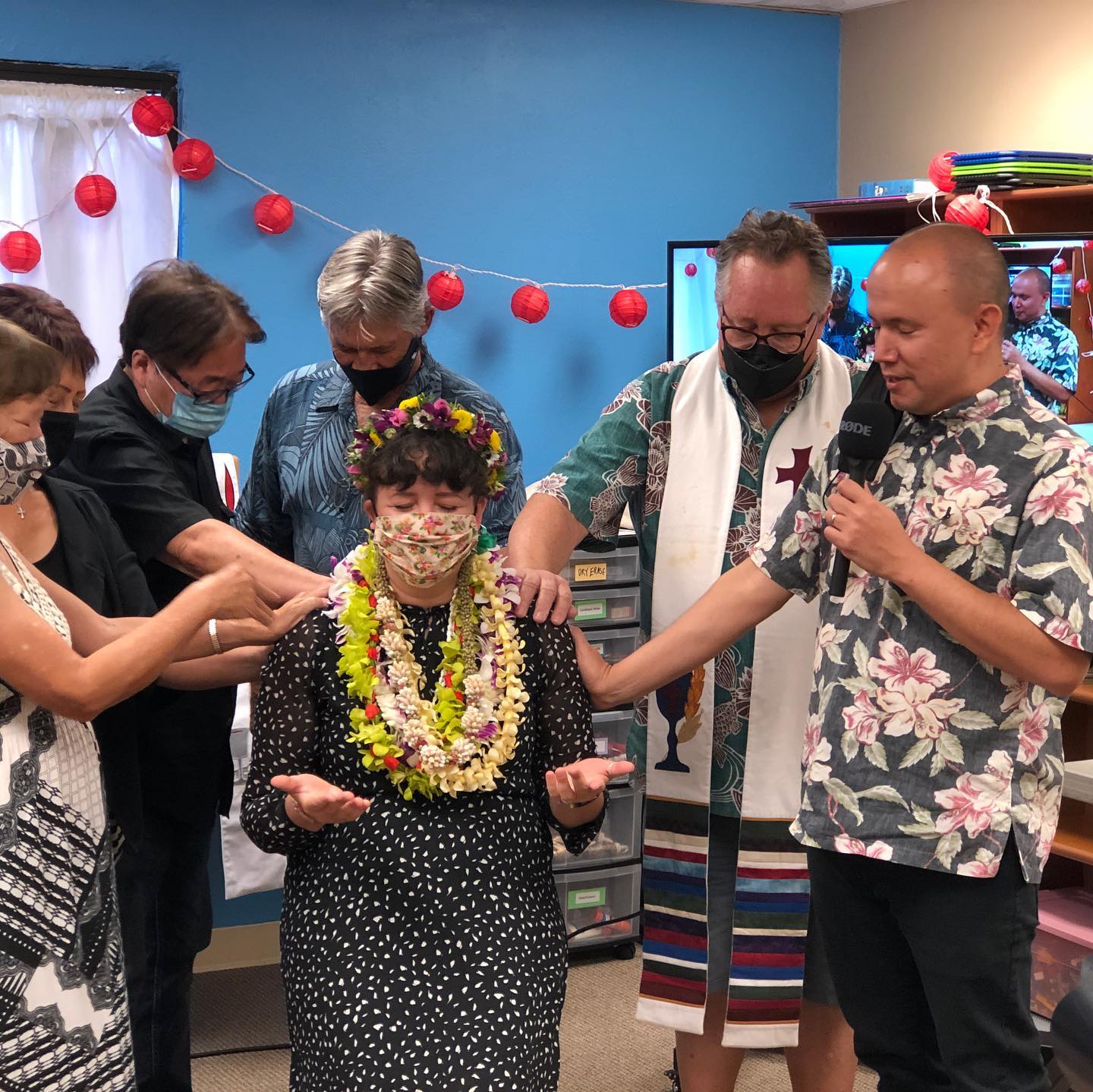 Rebecca Stringer was surrounded by friends as she was ordained at Wellspring Covenant Church in Alea, Hawaii.

Most of the service was pre-recorded in Anderson Chapel at North Park University. Ordinands spoke their vows live, and an ordained Covenant minister physically laid hands on each candidate and vested them. Robert Rife, who ministers with Serve Globally, took his vows in Great Britain. Rebecca Stringer was surrounded by friends as she was ordained at Wellspring Covenant Church in Alea, Hawaii.

“It was super special to celebrate at my home church where I serve and also remotely with you all in yesterday’s ordination service!” Stringer wrote in a Facebook post. “I’m so thankful for our Covenant family and the way we were able to continue passing the torch even in the midst of this Covid nightmare. Each of us in the room together were all so moved and challenged by Reverend Dr. Catherine Gilliard’s poignant and timely message. Today I’m feeling grateful and connected (even way over here in Hawai’i), with our mission friends on the mainland and beyond.”

In the Pacific Northwest Conference, all eight newly credentialed ministers participated in the service from Cascades Camp and Conference Center in Yelm, Washington, where some of their families spent the weekend. 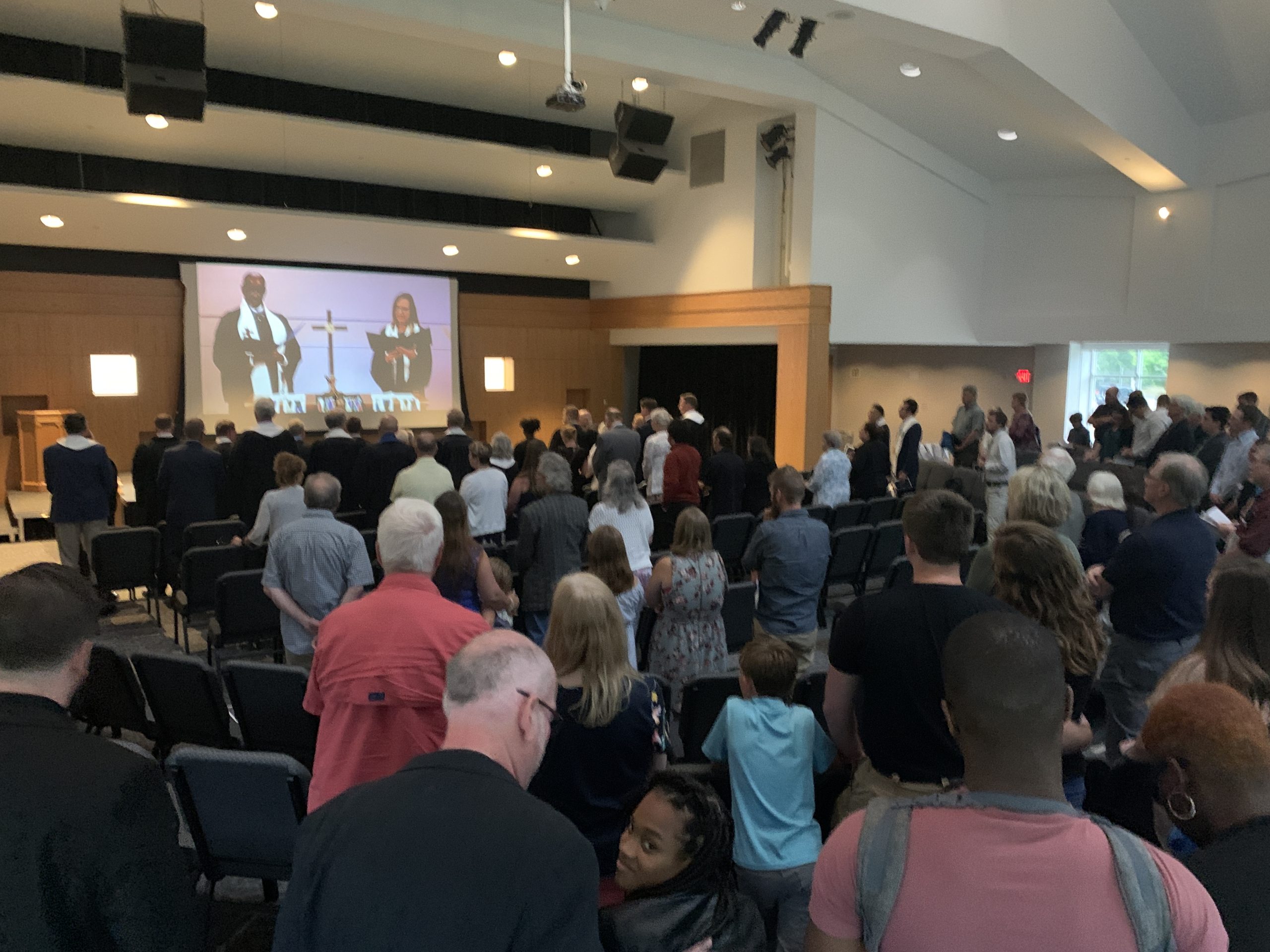 More than 100 people gathered at Minnehaha Academy South Campus in Minneapolis for the ordination of 11 candidates from the Northwest Conference.

The Northwest Conference hosted a service at Minnehaha Academy South Campus in Minneapolis. More than 100 people gathered to watch 11 ordinands from the conference and one from the East Coast Conference whose family lives in the area be ordained.

The worship elements at the Minnehaha event included the procession that is traditional during the in-person service. As the hymn “Holy God, We Praise Thy Name” was played, children led the ordinands into the chapel while carrying a Bible, pitcher of water, candle, and stole.

“We tried to make it as close as possible to a normal experience without everyone in the full denomination being gathered in person,” said Cheryl Theilen, the conference director of administration.

The East Coast Conference’s record-setting 21 ordinands was the largest group from a single conference this year. Bethany Covenant Church in Berlin, Connecticut, hosted four candidates. Five others gathered at Highrock Covenant Church in Arlington, Massachusetts. Most of the others were ordained at their churches.

Catherine Gilliard, superintendent of the Southeast Conference, preached the sermon. She exhorted the ministers to be courageous, prophetic, and healing voices in polarized times when more than the pandemic has kept people apart. “You are being sent out to preach well,” Gilliard told them. “Choose relevant passages in the Word of God, allowing people to be formed by the power of God’s Spirit. Be bold and confident that God has called you to continue the work of turning the world right side up.”

Watch video of the service here.