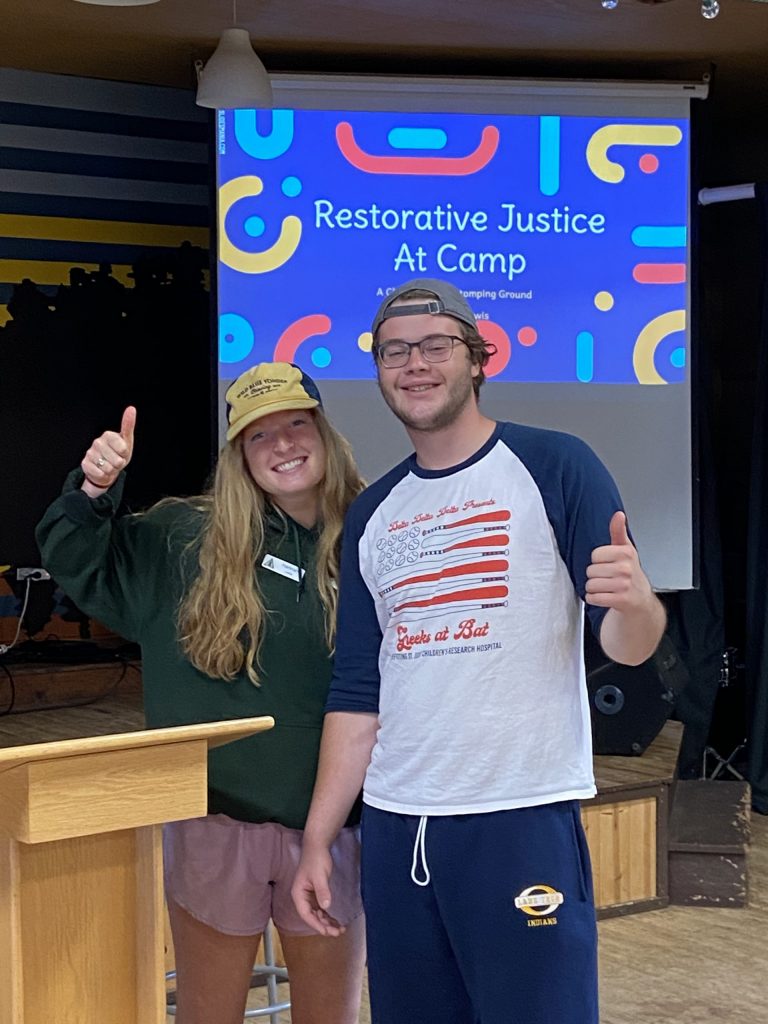 The first campers in more than a year arrived Sunday at Covenant Point Bible Camp in Iron River, Michigan. They will enjoy a week of worship, games, skits, and connections. But just as can happen at home, some campers will have conflicts.

This year, staff are trying a new way to help turn those conflicts into opportunities for deeper friendships as well as to learn more about Christ’s love and mission to reconcile people.

“Camp is a great place and super fun, but when conflicts arise, sometimes our strategies have been too informed by school disciplinary methods,” said Hannah Lewis, the intern who recently developed a training for camp staff. “We want to emphasize restoring relationships.”

As part of that training before camp opened, 47 staff members, including college and high school students, learned and practiced basic techniques of restorative justice.

Lewis developed the training after an in-depth study through North Park Theological Seminary’s School of Restorative Arts (SRA) and a six-week program at Stomping Ground Camp, a non-Covenant camp in New York that teaches “radical empathy” and “restorative practices” at every age level.

The process includes bringing together students who agree to mediation as well as a camp staff member and possibly witnesses to the conflict. They all sit together to talk about how they have experienced a negative interaction.

Lewis said one key aspect is to change the language used around a dispute. She suggests replacing words such as “bully,” “offender,” and “victim” with “the person who has been harmed” and “the person responsible for the conflict.”

I don’t think it’s ever too early to start setting these expectations and dealing with conflict—no matter how small—in a really thought out and protective way.

The process can work with campers of all ages, Lewis said. “Obviously we’re constantly shifting how we ask questions and how we relate based on the ages of the campers, but I don’t think it’s ever too early to start setting these expectations and dealing with conflict—no matter how small—in a really thought out and protective way.”

Lewis said one goal is to help people develop empathy—to go beyond feeling sorry for the other person to really understand how they feel.

She hopes campers who experience restorative justice will take what they learn and use it in their day-to-day lives, and that staff members will also put it into practice for any conflicts they might have working together.

Executive director Erik Strom said restorative justice is a core scriptural value and learning how to practice it is part of the discipling process that staff also experience while working at camp.

Strom had encouraged Lewis to do an in-depth study of restorative justice and how it could apply to camping as part of her internship. “I’ve been influenced and inspired by the work at the seminary in the School of Restorative Arts and continue to be compelled by the gospel to restore relationships. To see that kind of work happening here is really important to me,” he said.

Lewis graduated from North Park University in May 2020 and took a class through SRA at Stateville Correctional Center.