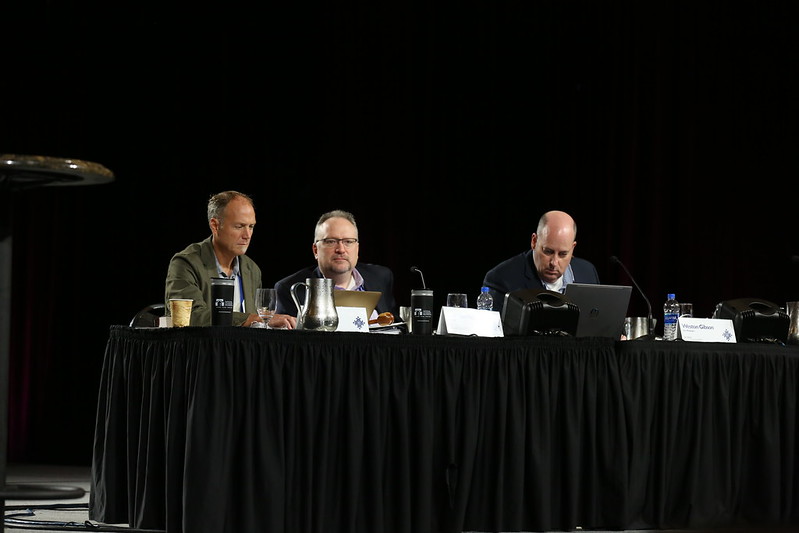 Jonathan Wilson, pastor of Salem Covenant Church in Pennock, Minnesota, will again serve as moderator for the Annual Meeting of the Evangelical Covenant Church later this month. He is tasked with overseeing a meeting with unique challenges due to the cancellation of the event in 2020 and this year’s gathering being virtual for the first time.

The Companion talked with Wilson about how the Annual Meeting Officers have planned for the event and what delegates should know.

How are you preparing for this unique meeting?

I feel a lot better about it than I did before I saw and understood how the interface was going to work. We’re using a system called AGM Convene—AGM stands for Annual General Meeting—and is built for meetings  just like ours. I encourage delegates to take part in one of the online delegate orientations the Annual Meeting Officers have been hosting online throughout May and June. I’m comfortable with the platform now that I have spent time learning how to use it, and I think we will be able to have a meeting that is in the spirit of what Robert’s Rules require of a deliberative assembly.

How will Robert’s Rules be applied to this gathering?

Robert’s Rules say that if a deliberative assembly is held online, it needs to provide a functional equivalent to everyone being in the same room and being able to hear the speaker at the same time. People will be able to reserve their spot in line by using the “Ask a Question” feature on the virtual platform and then identifying who they are by typing in their name and the entity they are representing. This feature will allow delegates to essentially function as if they are going to a microphone and standing in line while waiting their turn. No one else can be heard while that person is speaking. That is reflective of the decorum of the deliberative assembly.

Delegates will also identify whether they are speaking for or against something, so we will be able to go back and forth during a debate. If there is a privileged question or motion, then that might be able to bump them ahead of the line. That will be at the discretion of the head table and myself. If a debate has gone for 30 minutes and someone wants to move to extend debate, they can choose the option of “Privileged Motion” on the “Ask a Question” portal, and we will be able to see it and recognize that as a privileged shoutout from the floor so there is a functional equivalence.

Will delegates who are speaking be visible to the rest of the assembly?

Yes. Once delegates have queued to speak, they will be asked to unmute their microphone and turn on their video. We are excited about this feature as it will allow the meeting to feel more personal as we hear directly from our delegates.

Will the officers be at the meeting in-person, and will delegates be able to see you?

Yes, we will be at Crossroads Church in Woodbury, Minnesota. Some key presenters and denominational leaders will also be there. It will be the production hub, and we will have techs on hand. Crossroads has enough bandwidth so we can do this meeting effectively.

Some business from last year also will be conducted. Will there be enough time to debate?

Yes, we’ve actually set aside an extra day. Now, with the Strategic Alignment Team (SAT) recommendation being removed from consideration this year and recorded in the minutes instead, that will create even more space.

Even though the SAT vote has been postponed until 2022, will there be time for discussion on that recommendation?

In terms of actually debating the question, the debate is only appropriate if it’s going to be voted on because you will have a different set of delegates next year. In fact, the moderator will be different.

We will still have the format we’ve had for many years in which delegates can submit questions by a certain time in advance, and they are answered by denominational leaders at a specific time in the meeting. Apart from asking clarifying questions after the presentation, that would be the opportunity for people to ask questions about the proposal and the impact of waiting another year.

What happens if there are technical glitches?

If some kind of glitch happens in the hub at Crossroads, I think we have the flexibility to address that. As far as technical glitches on the delegates’ end, we have already put it into the standing rules for the meeting that would be adopted that we are not able to accept someone’s computer crashing as a point of privilege to say they didn’t get to vote or participate. Each delegate is responsible for having a good computer and internet connection.

How have you and the other officers prepared for the meeting?

The Annual Meeting Officers are a small group of volunteers. It was almost as much work to cancel last year as it was to have the meeting! Before we made that decision, we worked with the Covenant Governance team to consider what it would mean for 2020 and what it would mean for Gather 2021. We have been working throughout the year to make sure this meeting goes well, and we feel confident it will. We are looking forward to gathering in this virtual space to conduct the business of the church together.