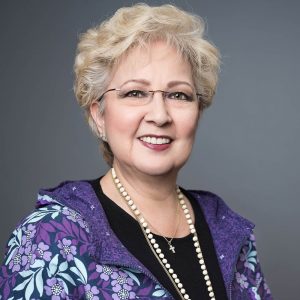 Gail Anagick Schubert says she was about five years old when her great-grandmother Miyugak told her, “You are going to be an attorney.” At the time, Schubert was living with her parents and eight siblings in a two-bedroom house in Unalakleet, Alaska.

It might have seemed a far-fetched idea at the time for an Inupiaq child growing up in a tiny village on the shore of the Bering Sea whose family studied by candlelight around the kitchen table. But Miyugak, who was the eldest daughter of the tribal chief who invited Swedish Covenant missionary Alex Karlson to start a mission station there, was right.

What she did not foresee was how Schubert, who attends First Covenant Church in Anchorage, would help shape the region’s future as president and CEO of the Bering Straits Native Corporation (BSNC) while also helping lead multiple organizations committed to Eskimo culture and promoting justice.

She moved to New York City—a far cry socially, culturally, geographically, and economically from Unalakleet—where she worked for two Wall Street law firms and the Federal Reserve Bank of New York. But Schubert always intended to return home to Alaska.

In 1992, she opened a law firm in Anchorage, where a larger mission quickly unfolded. She learned that BSNC was floundering financially and figured she could use her expertise to help. She ran for a seat on its board and won, eventually becoming the corporation’s executive vice president and general counsel. In  2010, she became CEO and president.

The law mandates that those corporations provide for the social, cultural, and economic well-being of their Alaska Native shareholders in perpetuity. The corporations oversee a variety of businesses in Alaska and the Lower 48 and use revenue from those businesses to provide benefits that include dividend distributions, job-training programs, scholarships for every level of school, and Native language programs. Schubert is committed to hiring Alaska Natives.

Despite the challenges, Schubert remains optimistic about the future. She notes that her people have survived for hundreds of years with resilience and adaptability.

Today BSNC is a $400 million corporation, having greatly expanded its corporate holdings. Its more than 20 subsidiaries include businesses that focus on tourism, construction, resource management, and facility maintenance support. Schubert says she has built on the work of past president Tim Towarak, who started the turnaround with a gifted team of people.

The growth has been due in large part to increasing government contracts and developing Native-owned businesses. Schubert’s leadership was highlighted in a cover story for Alaska Business magazine.

As chair of the ANJC, she joined other leaders in signing an open letter to protest the restraint tactics of Wasilla police in which they kneeled on an Alaska Native woman’s jaw and hog-tied her before transporting her to a police car. The co-signers grieved the long history of injustice against Alaska Natives and other people of color. They also wrote that they grieved for law enforcement officers and noted that a Wasilla officer had been killed following a traffic stop.

The ANJC is one of six organizations nationwide to receive the 2019 Paul H. Chapman Award from the Foundation for the Improvement of Justice due to its leadership in getting the Alaska legislature to pass significant reforms to sexual violence laws. The effort was spurred when a judge gave no jail time to a man who had kidnapped, choked to the point of unconsciousness, and sexually assaulted an Alaska Native woman.

“Not only does this award recognize the extraordinary work done to improve Alaska’s sexual offense laws and increase safety for Alaska Native people, but it also shows the importance of advocacy for victims and equal treatment for all throughout Alaska’s justice system,” Schubert said at the time.

Schubert has also made reducing and adapting to climate change one of her top priorities. “Climate change doesn’t just mean places are getting warmer: It means you can’t trust what traditionally would have happened—whether it is people being able to go fishing or hunting or berry picking,” she says.

“The weather conditions we’re seeing in our region are really extraordinary and unlike anything that has happened before,” she says. Her 94-year-old mother told her recently that there was more snow on the ground in Unalakleet than she had ever seen. She notes that the permafrost is warming and the sea level rising, causing serious erosion that threatens some coastal villages. At other times there has been little snow and almost no ice.

Despite the challenges, Schubert remains optimistic about the future. She notes that her people have survived for hundreds of years with resilience and adaptability. The desire to carry forth and restore lost traditions also is part of that change. Although she does not speak Inupiaq, she is heartened by the increased interest of young people to learn the language as well as other native tongues. The BSNC helps support some of those programs. “It is wonderful that they are learning the languages,” Schubert says, “and I love it when our church sings songs in Inupiaq.”

For Schubert, it’s all about the past, present, and future.