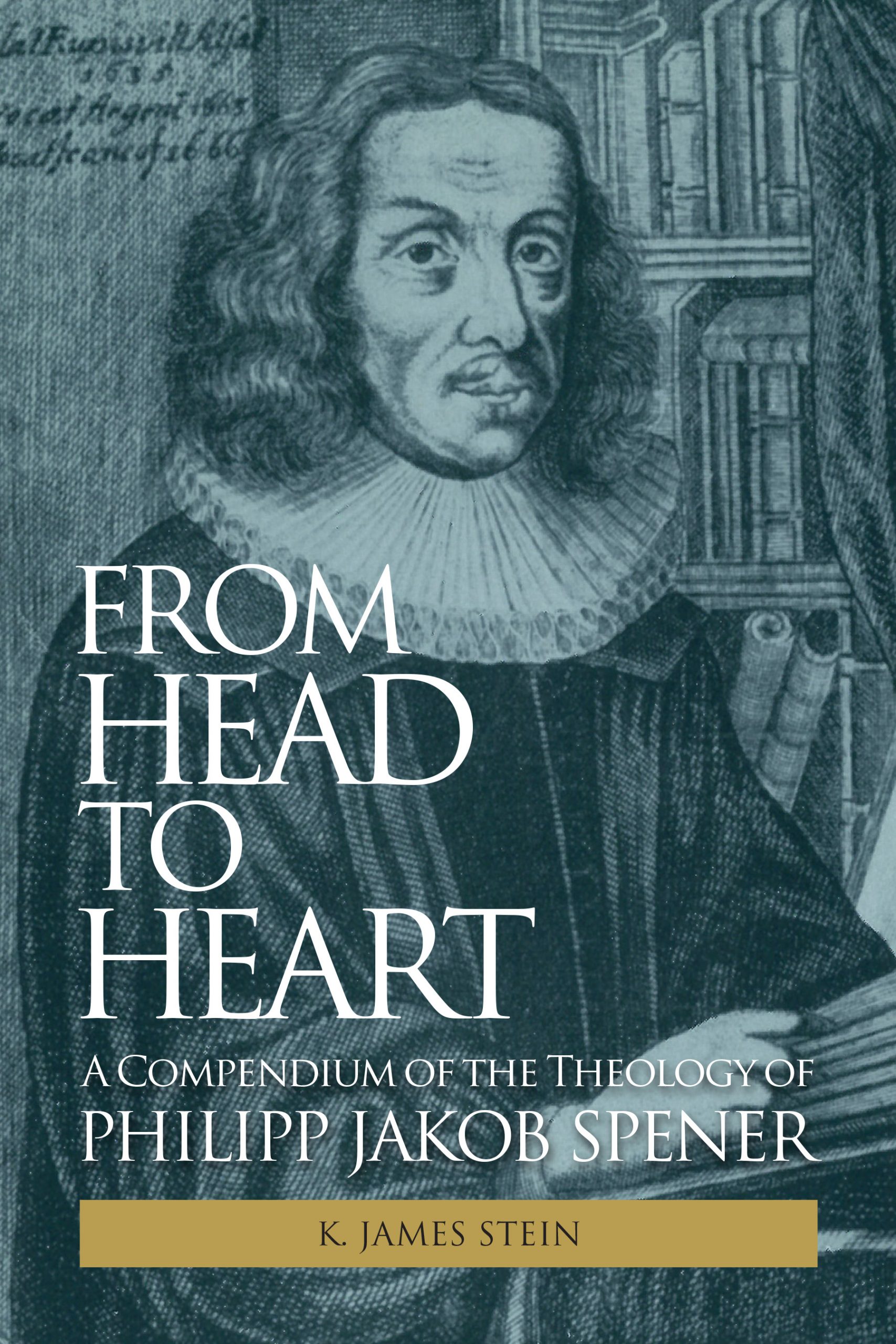 From Head to Heart
A Compendium of the Theology
of Philipp Jakob Spener
K. James Stein, editor
Covenant Publications, 348 pages

A century after the Reformation, discontent with the slow progress of reform in the life and practice of Protestantism, the devastation of the Thirty Years’ War, and the pitched theological controversies of the age prompted a renewal movement within the Lutheran churches of Europe. These latter-day reformers gained a clear leader and reform agenda in 1675 when clergyman Philipp Jakob Spener published Pia Desideria (“Pious Wishes”), giving shape and definition to the Pietist movement.

While this story may be familiar to many within the Covenant Church as we have been so richly formed by historic Pietism, the writings of one of its chief architects have remained inaccessible for most contemporary American readers. Spener’s extant writings fill some seven thousand pages, yet precious little of this material is available in English. As author and theologian J. Steven O’Malley notes in the foreword of the book, this has left the English-speaking world “deficient in its access to in-depth literature on the most important figure in German Pietism.”

James Stein’s latest book, From Head to Heart, is a significant contribution to addressing this need. This edited collection is the harvest of decades of research by Stein, who is emeritus professor of church history at Garrett-Evangelical Theological Seminary in Evanston, Illinois. Stein’s masterful command of these primary sources is on full display here. The book is organized topically, and he briefly introduces each chapter with essential context, then weaves together representative excerpts drawn from the full corpus of Spener’s writings.

Not only is this a substantive sampling of Spener’s thought, but it also freshly communicates his compassionate, pastoral concern for instilling a vibrant Christian discipleship in the lives of his readers. I would echo O’Malley’s assessment when he says these excerpts allow readers to discover “Spener’s distinctive presentation of a living evangelical faith which is biblically grounded, graciously communicated, and irenic in its handling of subjects frequently the source of polemical controversy.”

The excerpts are seamlessly organized, and Stein’s explanations are not overly burdened with jargon, making them accessible to non-specialist readers. Most of the translations are Stein’s in clear, easy-to-read, and often sparkling English. Some recurring themes include contemplation of the Trinity, the new birth and the new life in Christ, and the redemptive work of the Holy Spirit. Chapters also address such practical topics as ethics and the life of prayer.

Spener’s expositions of theology include a humble acknowledgment of the challenges involved in placing faith and reason in their proper relationship. For the 17th century audiences who heard Spener preach and teach, his encouragement to average laypeople to look for the “witness of a divine work” in their lives would have been novel and exhilarating. Though Spener dutifully attempted to remain within orthodox Lutheranism, at the same time he espoused an approach to the new life in Christ and the guidance of the Holy Spirit that heightened the relevance of this theology in the everyday lives of believers, which was anything but mainstream for its time.

His encouragement to average laypeople to look
for the “witness of a divine work” in their
lives would have been novel and exhilarating.

While Spener mostly embodies an irenic expression of Christianity, even he at times revealed feet of clay. Stein explains how Spener could become ensnared in zealous debates with heretics less committed than he to orthodoxy. Nevertheless, Spener regularly demonstrated a pragmatic attitude toward the strains of peasant life, such as when he acknowledges that plowing a field on a Sunday evening to get a head start on the week’s work is less of a sin than visiting the tavern, and that the former is a preferable transgression if one must choose. Such comments give glimpses of his nearness to his parishioners and awareness of the pressures they faced, which no doubt contributed to making him such a beloved pastor. Stein’s compendium contains some passing references to events and themes in Spener’s life. For a full account of his life and times, readers would benefit from also reading Stein’s biography, Philipp Jakob Spener: Pietist Patriarch (also published by Covenant Publications and available at CovBooks.com).

Perhaps most moving are the portions of Spener’s writings that mourn the failures of the church, as well as his confidence that Scripture’s promises and the Spirit’s guidance can be trusted completely. “One wants to ask how such a church in which there are considerable defects can be considered a true church and what grounds there are for calling it that.…Such a church remains true in the retention of the divine word and its truth, so that we consider the holy sacraments and the service of worship to be unchanged in essence. Because the Holy Spirit is always present with the word and holy means of grace, it follows that the Holy Spirit is with such a church at all times and rules in the gathering of the same, insofar as he is given room.…Thus we simply trust the divine promises.”

These writings are far from a nostalgic return to a “simpler time.” Rather, those who accompany James Stein on this tour of Spener’s theology may be surprised to find a pastor struggling with challenges familiar to those besetting the church today: how to minister to people seeking a living faith amidst disruptions caused by war, economic crises, and disease; how to build Christian community in an age marked by cynicism and division; and how to engage constructively in important debates while seeking consensus on the essentials of the Christian faith.

This book is a fitting capstone to Stein’s lifetime of research and a welcome contribution to scholars, clergy, and laypeople alike looking to be inspired by a kind of faith that warms the head and enlightens the heart.

Order today at Covbooks.com.
For a 15% discount use coupon code HEAD15HEART.

Mark Safstrom is a member of Ravenswood Covenant Church in Chicago and is associate professor of Scandinavian studies at Augustana College. He also teaches Covenant history for North Park Theological Seminary. When school is not in session, you can often find him someplace outdoors by the water, whether in Washington state where he grew up or the Upper Peninsula of Michigan.