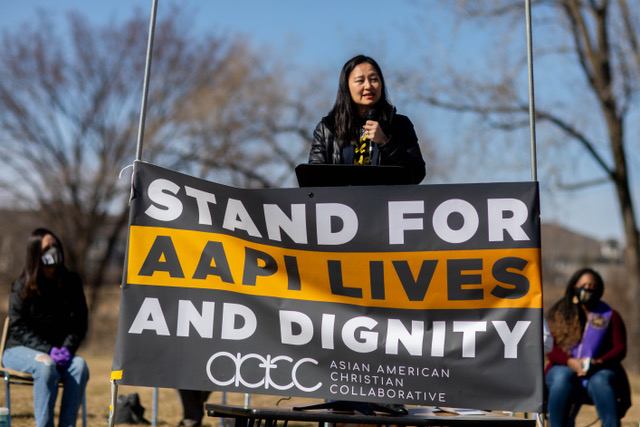 A multiethnic gathering outside New City Covenant Church in Edina, Minnesota, on Sunday was one of 14 cities across the country as part of the National Rally for AAPI Lives and Dignity, which was organized by the Asian American Christian Collaborative.

“It was a powerful and poignant gathering,” said the congregation’s co-lead pastor, Mary Chung March, who also is chair of the Mosaic Commission and the president of the Covenant Asian Pastors Association. “Minneapolis Covenant African American, Indigenous, Latino and Latina pastors, was well as white pastors, stood alongside our AAPI (Asian Americans and Pacific Islanders) pastors and leaders.”

The rally was organized in response to the deadly shootings at three Asian-owned spas in Atlanta last month. Covenanters turned out at similar events in other cities.

Recorded evidence of violence against members of the AAPI community is highlighting abuse and racism that many AAPI people chronically live with in silence. According to STOPAAPI-Hate.org, of the 3,800 recorded incidents of AAPI hate in the past 12 months, 70 percent have been aimed at women. On Monday a man attacked a Filipino woman in New York City, while bystanders watched without coming to her aid.

After the Atlanta shootings, Chung March gathered influential AAPI pastors and leaders across the nation to create a video called “A Call for Solidarity,” which has nearly 20,000 views. Recognizing that AAPI leaders can no longer remain silent, she asked, “We need to speak and speak together. Will you speak with me?” The Asian American Faith Leaders called for an end to the racism and for fellow Christians to speak out.

Chung March said she hopes her Covenant colleagues will respond wherever they minister or work. “I’m hoping that they’ll go from knowing in their head that racism is real to experiencing it in their heart and understanding that ‘This is really happening to Mary or another AAPI sister or brother in Christ who is dear to me.’ This is our lives, and we are not expendable.”

She adds, “A quick web search of ‘ways to learn more about Asian American history or AAPI violence’ will reveal many resources. If people are asking themselves, ‘What do I do to help?’ I have one simple question: ‘If this happened to your grandmother, your spouse, your sister, or your daughter, what would you do so this couldn’t happen again? Go and do that.’”