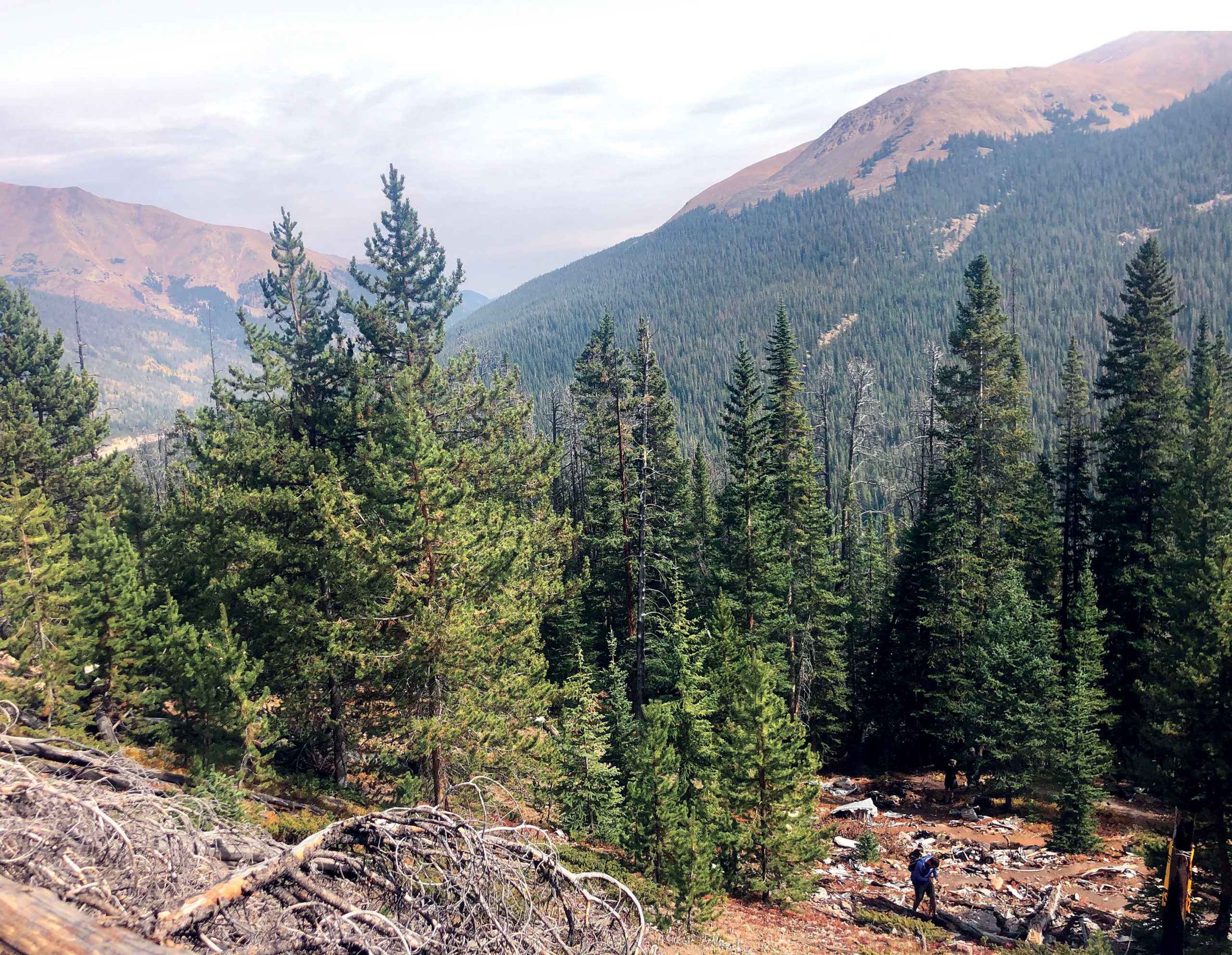 Discovering the Heights of Grace in the Depths of Loss

October 2, 1970, felt like a warm summer day as the flight carrying the Wichita State University football team took off. They were on their way to play Utah State University in Logan, Utah. The Wichita team was not exactly having a winning season, but their fans were loyal and they were hopeful for a win.

A few days before the trip, their chartered aircraft was substituted for unknown reasons with two aging twin propeller airplanes, which the players dubbed the Gold plane and the Black plane after their school colors.

Twenty-one-year-old Jack Vetter was starting his senior year as defensive tackle and had a seat on the Gold plane for first string players. 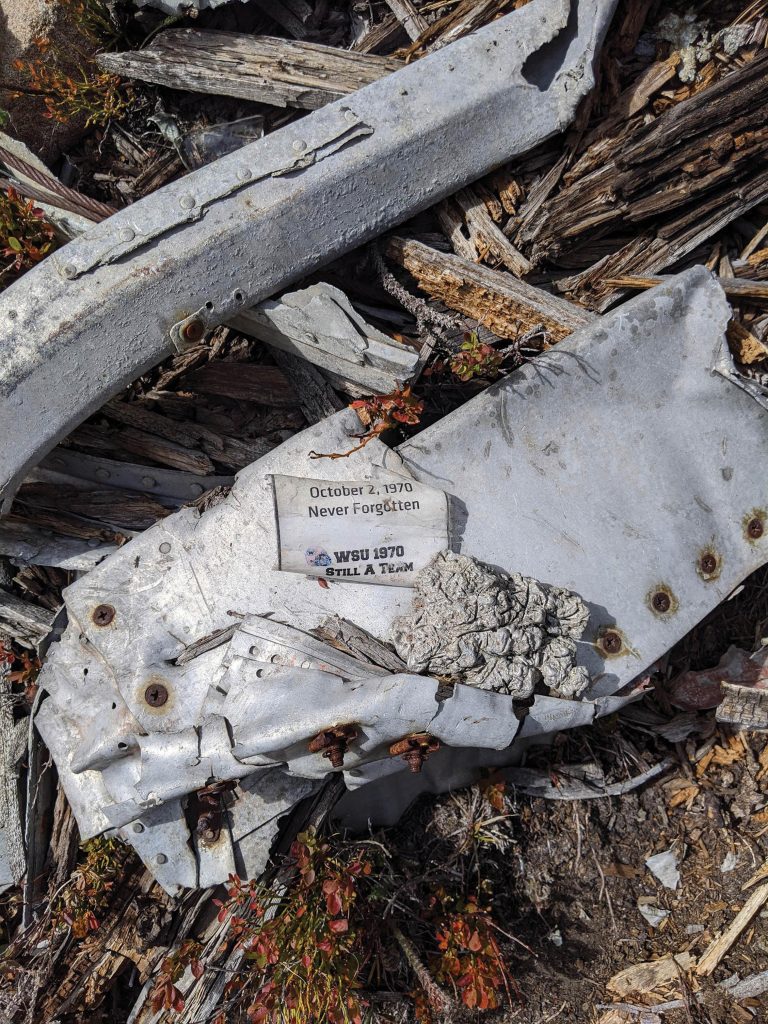 As Jack’s plane took off, his parents, Jack Sr. and Charlotte, and younger brother, Chuck, were back home in McPherson, Kansas, looking forward to the news of a win. His sister, Marcia, had just started her first year teaching music in Chicago.

The flight plan was to go north to Cheyenne then over the Rockies. The Black plane stayed on course, but after a fuel stop in Denver, the pilots of the Gold plane decided to take a more scenic route over the Loveland Pass, treating their passengers to a view of the fall colors.

The plane, however, was overweight and unable to gain enough altitude. When the pilots realized they couldn’t clear the pass, they attempted maneuvers to turn around, but there wasn’t enough room. The plane crashed, and 31 people lost their lives. Nine survived.

Surviving passengers recall seeing nothing but green and feeling the bottom of the plane brush against trees until it made its final impact on the mountain. Some were ejected through the windshield, others crawled out holes in the fuselage made by tree trunks. Many were crushed by seats that dislodged and tangled in the front of the cabin.

We weren’t assured of much, except
the support and love surrounding us.

The plane was already on fire when survivors tried to save their trapped teammates. Jack knew they would not be able to pull him from the wreckage and cried out, “Go, you can’t save me!” His friends did all they could, but Jack’s plea was the last thing they heard before the plane exploded and flames engulfed the cabin.

Jack’s last words had been concern for the safety of his friends who would later describe him as “the very one you would want by your side if you were in a tough spot.” His teammates remember him as fun, athletic, gentle in spirit, and fast—once a team member challenged him to a race in the school parking lot. Jack won by a long shot—in his cowboy boots. 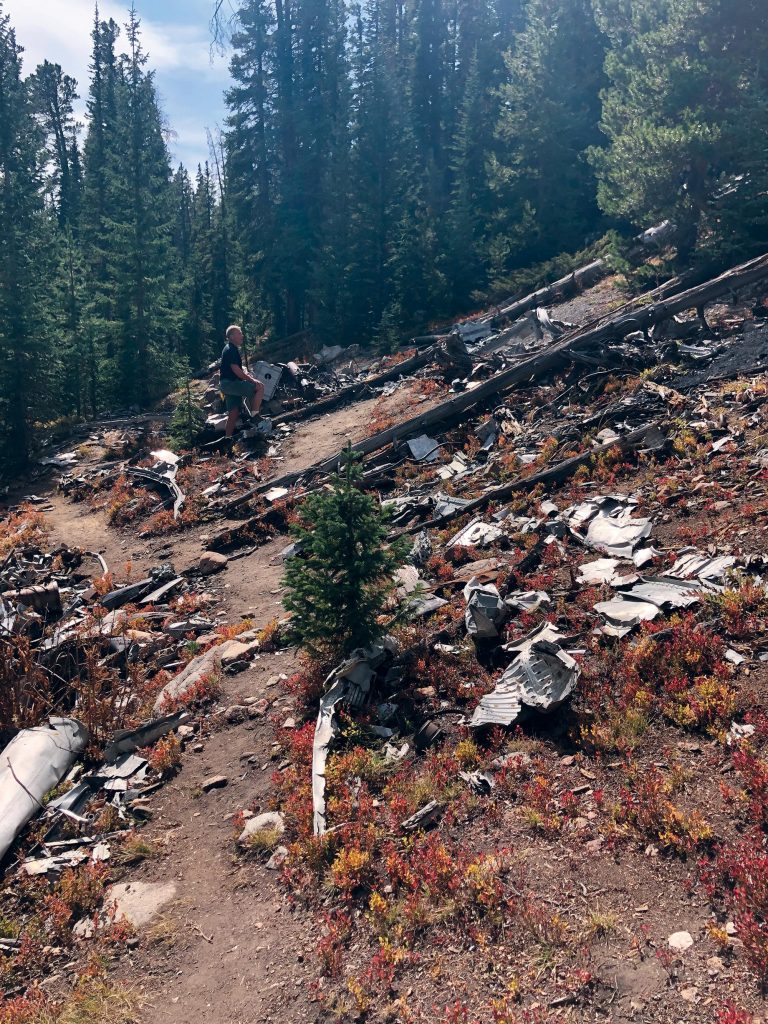 Fifty years later, the crash site remains a mix of debris and memorials.

News of the crash traveled quickly as nearby witnesses saw its fateful trajectory and the inevitable smoke. Ambulances took the injured passengers to a number of different hospitals in the area, but it was days before the list of survivors could be verified. Jack’s family gathered, waited, and prayed.

His mother, Charlotte, later recalled many family and friends from Countryside Covenant Church in McPherson, Kansas, coming through their front door with offerings of food, coffee, and warm embraces. She would share with me in later years that the most healing part was the comfort of their presence. “They just showed up,” she told me. “Their presence gave us a glimpse of God’s grace and peace as we hoped for news of Jack’s survival.”

I was a young girl in Ohio when I heard the news of a plane crashing in the Colorado mountains. “Mom, did you hear the newsman?” I can still hear myself asking. “He said a football team was on that plane, and it crashed into a mountain!”

Why did that seemingly random event resonate so poignantly in my 12-year-old mind? I didn’t understand it then, but in a few short years I would be calling it my own story.

As a freshman at North Park University, I met a good-looking young man from the heart of Kansas. Over a cup of coffee, our stories began to meld. In time I realized that God’s gift to me was not random. He stopped my busy 12-year-old self, hundreds of miles away from the unfolding story, to allow me to own the memory for the time when Jack’s little brother, Chuck, and I would start our lives together.

When I became a young mom, I witnessed my mother-in-law, Charlotte, selflessly serve the women of the church—spending time listening to young moms and babysitting their children. I often wondered how she got through the tragic loss of a child. Her example sustained me when I faced my own challenge in my life as a mother.

Our fourth child, Nelson, was born six weeks early with a plethora of medical issues. His little life hung in the shadows for the first couple years. We knew that Nelson would be facing physical and mental challenges, but it wasn’t until he was 10 that we found a geneticist who was able to identify his rare condition—he was a “Costello kid.” Costello syndrome is a disorder that affects multiple organs and often takes the life of a child by age two due to failure to thrive. Without that diagnosis in those early years, we didn’t know how close we were to losing him. It was as if God had given us a buffer of hope to persevere.

We weren’t assured of much, except the support and love surrounding us—and three other young children to keep us on our toes. Again, the prayers of faithful friends and family at Countryside Covenant carried us when we were too tired to do much else but survive.

Nelson is 26 now, and his life looks quite different than projected. Instead of focusing on his own limitations, Nelson fills his days happily serving coffee at a nearby coffee shop, greeting patrons at the local barber shop, and sharing his faith at youth group every Wednesday night. Our family, our church, and our community have been overwhelmingly blessed by Nelson. His loving nature is all-encompassing. And his siblings are devoted to him.

No matter the outcome, those who live with hope
of more beyond this earth have the ability to see past
the present, and are not captured by sorrow’s grip. 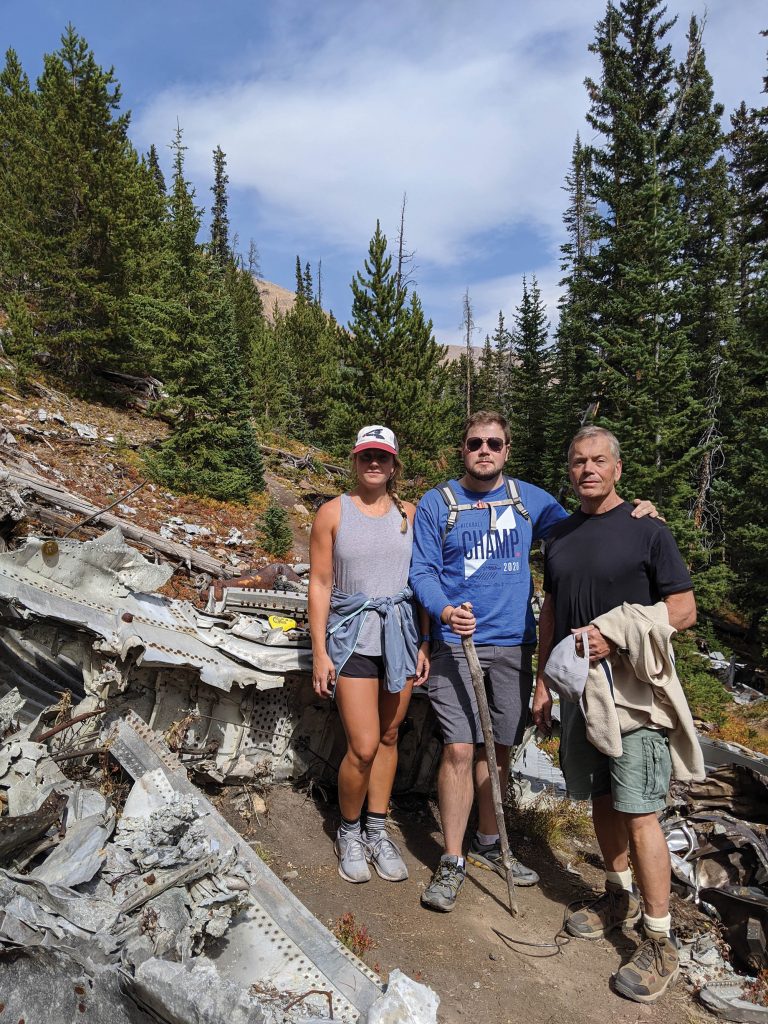 Over the years, our family has visited the site of the crash—a debris-filled field just above the Eisenhower Tunnel on I70, near Silver Plume, Colorado. Our son Charlie and his wife, Yaz, made a trip up the mountain last summer. Chuck has been there numerous times and was joined by our son Sam and daughter, Johanna, for the short, steep hike on September 26, 2020, to honor the 50th anniversary of Jack’s death.

They climbed to a clearing just below the timberline, still scorched from the crash, with the remains of a Martin 4-0-4. As they walked among the twisted and molten airplane parts, Sam and Johanna asked their dad what he remembered about that day. Chuck recounted his memories and they talked and hugged and cried. And Sam noticed, “It’s amazing how the forest hasn’t retaken this space but has left it as a kind of memorial.”

Other memorials have marked the anniversary of the accident. Throughout the 2020 NFL season, Mitch Holthus, announcer for the Kansas City Chiefs, memorialized the WSU plane crash. Once a week, on a radio broadcast, he acknowledged each player who perished in the crash saying, “These boys are so often remembered by how they died. I want to highlight the way they lived.”

In Holthus’s tribute to Jack, he said, “Jack was an incredible athlete with a great sense of humor. His zest for life, cowboy boots, hat, and horses were what everyone loved about him! But it’s the lasting effect he had on this world that stands out. It was in saving the lives of three team members, who to this day are in awe of his courage and self-sacrifice.” 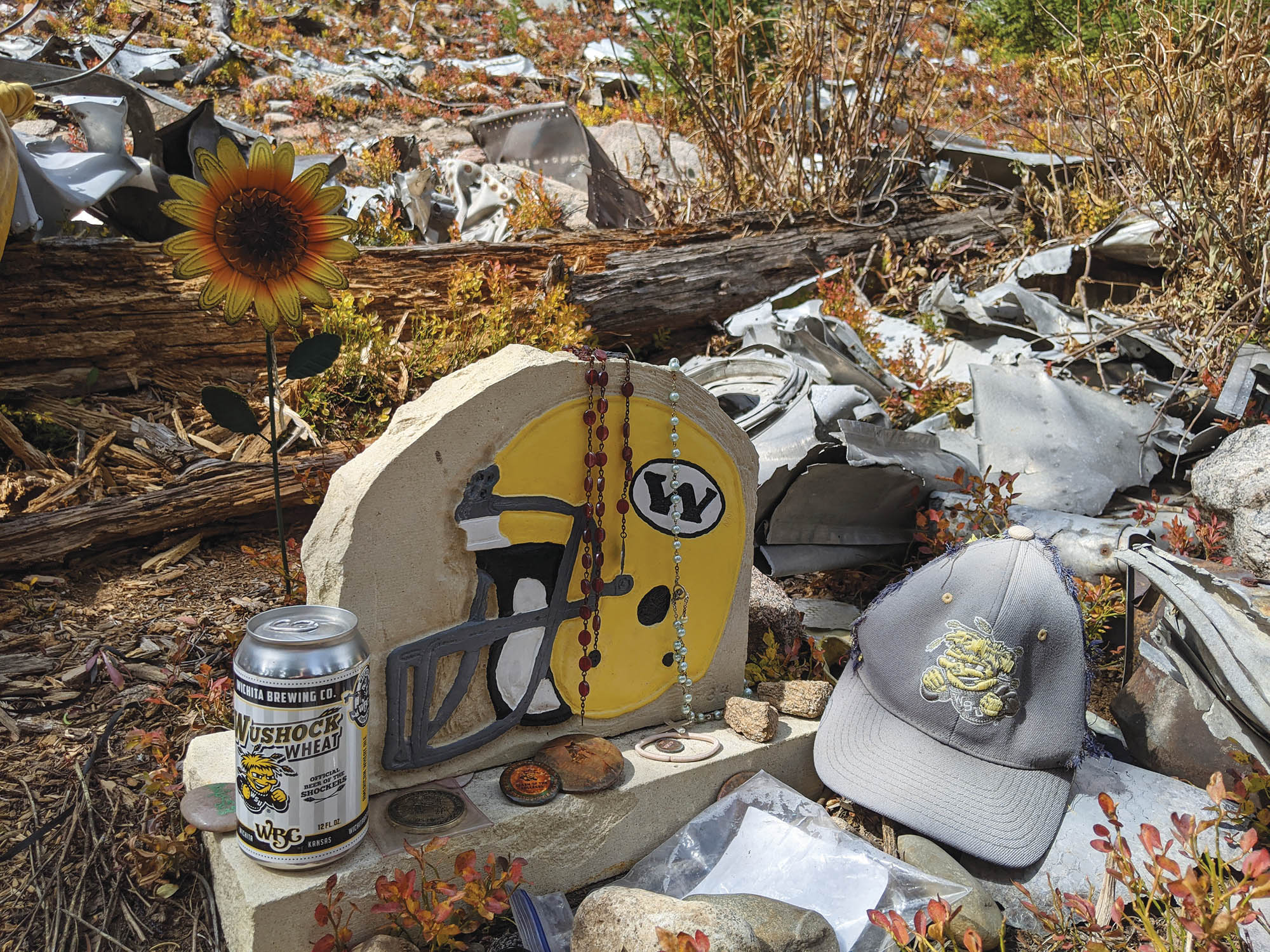 I believe there is lasting goodness in the single act of hoping, allowing the very core of our hearts to be fertile ground for loving, accepting, and refusing to be bound by grief and turmoil. No matter the outcome, those who live with hope of more beyond this earth have the ability to see past the present, and are not captured by sorrow’s grip. The faith of Jack’s family in an everlasting Savior held them through very dark days and in time, gave them peace.

Had an airplane pilot made different choices 50 years ago, how would our lives be different? We can’t answer that of course. Through the grace of God, I witnessed the lives of Charlotte and Jack Sr. as walking testaments of faith. My own children share a deep bond, cherishing life in light of the loss of their Uncle Jack’s life. And I have learned a hope that endures throughout Nelson’s life.

We hug, we love, and we remember that we have this one life to live on this earth. And with a simple faith, we can claim a peace that surpasses all understanding. God’s grace is truly sufficient.

Taryn Vetter is recently retired after teaching seventh grade literature for 25 years and is now teaching students in China online. She and her husband, Chuck, are actively involved at Countryside Covenant Church in McPherson, Kansas, where they own and operate two small businesses—Sounds Great Music and CTFit 24, a 24-hour gym. They have four children and two grandchildren, who keep them busy as travelers.