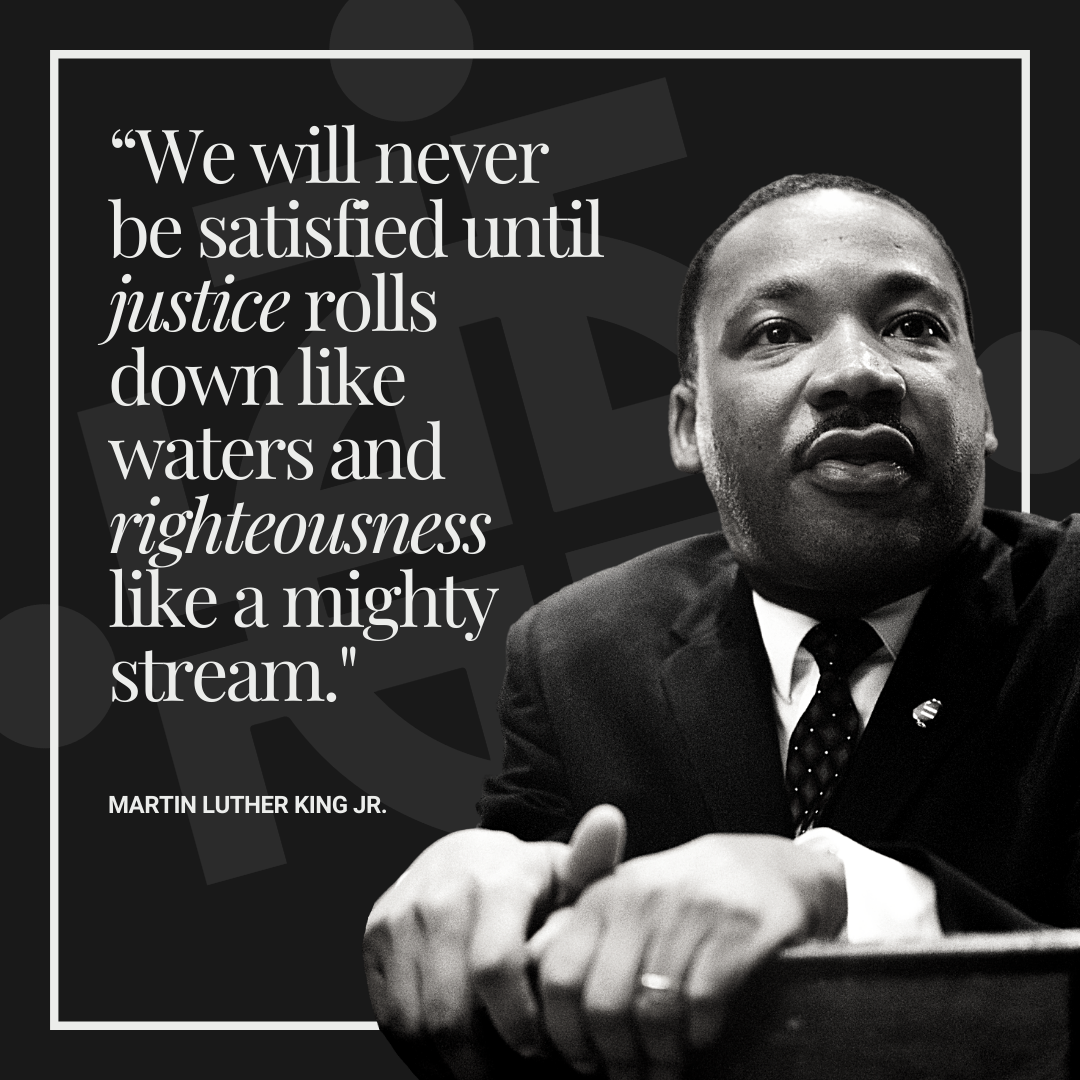 Martin Luther King Jr. stood on the steps of the Lincoln Memorial in Washington, D.C., and shared his dream. In Memphis, Tennessee, he stood inside a church and declared, “We’ve got some difficult days ahead,” and that he might not see his dream realized.

But he also told the gathering inside the Mason Temple of how God “allowed me to go up to the mountain. And I’ve looked over. And I’ve seen the promised land. I may not get there with you. But I want you to know tonight, that we, as a people, will get to the promised land.”

There have been strides toward that promised land, but it also is clear that there is yet far to go.

In the midst of ongoing difficult days, members of Covenant Offices share how they remain inspired by the preacher’s words to work for that dream that stretches as far back as the prophets and Jesus.

Dr. Martin Luther King Jr. said, “We must accept finite disappointment, but never lose infinite hope.” As a mosaic of mission friends, we put our hope in the resurrected Christ. He alone is the object of our infinite hope.

Dr. King said, “We will never be satisfied until justice rolls down like waters and righteousness like a mighty stream.” Sometimes it feels like the vision of a mighty stream of justice is just a trickle. But in the midst of the struggles to bring about equity, close the gap between the haves and have-nots, and install human dignity for all, King admonishes us not to “wallow in the valley of despair” but to continue to speak our truth and take a stand for that which is just and right.

So we will! When policies are made that slam doors of opportunities in the face of those most in need, we will not let our spirits descend into the abyss of despair and hopelessness. May Covenanters of all stripes continue to draw from the faith of Dr. King that “we will be able to hew out of the mountain of despair a stone of hope.”

Martin Luther King Jr. said, “I have a dream that one day my children will not be judged by the color of their skin but by the content of their character.” But his dream did not culminate with mere tolerance. His dream reflected the bigger dreams of our God of agape love.

Three years after his “I Have a Dream Speech,” King spoke with greater clarity about that dream: “I do not think of political power as an end. Neither do I think of economic power as an end. They are ingredients in the objective that we seek in life. And I think that end of that objective is a truly brotherly society, the creation of the beloved community.”

In the midst of our divisions and dissensions today in church and society, I am increasingly drawn to King’s God-given dream of the beloved community. It’s a dream worthy of our sacrifice.

These words are as true and necessary in 2021 as they were then. God loves and extends his grace to each of us—despite our sins, failures, history, and circumstances. I pray that we might all do the same for each other.

The legacy of Dr. King’s life reminds us of the work that is yet to be done. I am grateful to be part of a denomination that is inspired by the love of God to pursue mercy and justice for people of every tongue, tribe, and nation, and especially for those who are marginalized and suffer from systemic racism.

Over a year ago, I learned that my dad had seen and heard Dr. Martin Luther King Jr. speak when he was young. I was shocked because my dad grew up in Puerto Rico, and I had never heard of Dr. King being on the island. I did a quick search on Google to confirm whether what my dad was saying was true—I should’ve known better! There was Dr. King on February 15, 1962, speaking in Puerto Rico. He visited again in 1965. I was overwhelmed with pride that my dad got to listen to the pastor and legend, but more important, that Dr. King saw Puerto Ricans, who are Americans, as children of the Almighty God too.

Here’s an excerpt from his speech, “Stride Towards Freedom”: “God granted every nation to choose the high way….A way in which every[one] will realize that every other [person] is a child of the almighty God, made in the image of God. If we will but follow this way, we will be able to emerge from the bleak and desolate midnight of man’s inhumanity to man into the bright and glittering daybreak of freedom and justice.”