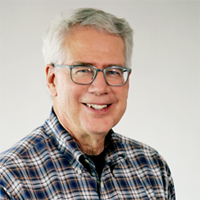 CHICAGO, IL —Ministry colleagues say Donn Engebretson has played a key formational role in how the Covenant reads Scripture and lives out its common life, including its commitment to ministries of compassion, mercy, and justice. Engebretson will retire in December after more than 40 years of vocational ministry.

“His voice has always been anchored in the identity, history, and even ethos of the church, and he has been very missional and strategic toward the future as well,” says Dave Kersten, dean of North Park Theological Seminary.

Engebretson has advanced that ethos as he helped lead the denomination in theological reflection and practice. “It was an enormous privilege to oversee and give leadership to the process of rewriting and refreshing of the Covenant Affirmations,” he says. The affirmations clarify the values and principles that have guided the denomination since it was founded in 1885.

“I’m convinced that Covenant Affirmations are still and always will be core to the identity and mission of the Covenant Church,” Engebretson says.

Engebretson also developed the process and led the writing of the Covenant’s first two resource papers. The papers are teaching documents designed to provide context and clarity for Covenant churches on critical issues of concern in matters of faith, doctrine, and conduct.

The papers have been more than words on a page, colleagues say.

“‘The Covenant Church and the Bible’ may be one of the most significant pieces of denominational writing in the last 30 years,” Kersten says. “You can’t understand the Covenant if you don’t understand our hermeneutic.”

Debbie Blue, the first executive minister of the Department of Compassion, Mercy, and Justice (now Love Mercy Do Justice), says much of the denomination’s work today was shaped by Engebretson’s prophetic voice on behalf of marginalized people.

“It was a time when some people were telling churches they should leave if there was a focus on justice,” Blue said. “We got a lot of pushback, but Donn was determined to speak out. His voice spoke to the necessity of the church to feel compelled and to actually address issues of compassion, mercy, and justice, about things like systemic racism.”

Blue adds, “His voice as a white male at the time was invaluable. He has been an incredible advocate.” She notes it was Engebretson’s idea to develop curriculum for the denomination’s Invitation to Racial Righteousness in order to provide pastors a way to help congregations discuss the potentially contentious topic.

Engebretson’s father, Milton Engebretson, was a pastor and served as the denomination’s president from 1967 until his retirement in 1986. From his father, whom he calls a friend and mentor, Donn says he learned to see conflict as an opportunity to live graciously.

“One of the things I most respected about my father is that he moved toward people who disagreed with him and that he discipled the people who were angry at him,” Engebretson says. “I can’t tell you how many people who have told me that when they were young, they were mad at something my dad was doing and stood up and blasted him at the floor of the Annual Meeting. Then they said, ‘I later ran into him in the hallway, and I was terrified,’” worried about how he would greet them. And Milt responded by saying simply, “How are you doing? How is your ministry?”

For a season, Engebretson provided leadership to the work of Covenant Kids Congo, a unique partnership between the Covenant and World Vision that focuses on sustainable development in the city of Gemena, DR Congo. “He got resources for people in the most hurting places in the globe,” Kersten says. “That changed lives. It saved lives.”

Gayle Gilreath, executive director of advancement, says Engebretson has been invaluable in helping raise funds for Covenant ministry. But, she says, “More important are the gifts he has shared with us as his friends, colleagues, and congregations. Donn shares candor with compassion, listens intently, discerns need and responds with pastoral care, teaches, coaches, and mentors with wisdom and passion. He practices sacrificial generosity and demonstrates the gospel through word and deed. More than anyone I know, with a deep commitment, he has tirelessly invited each one of us into a deeper relationship with Christ through the discipline of generosity.”

Engebretson says he is passing on what he has received. “I have been blessed by a whole cloud of witnesses who have spoken into my life and helped me in whatever small way reflect the Covenant at its best and my Lord.”

A memory book is being created to honor Engebretson. Anyone who would like to submit notes of gratitude, letters, and pictures can do so online https://DonnERetires.fromabirdie.com/contribute.