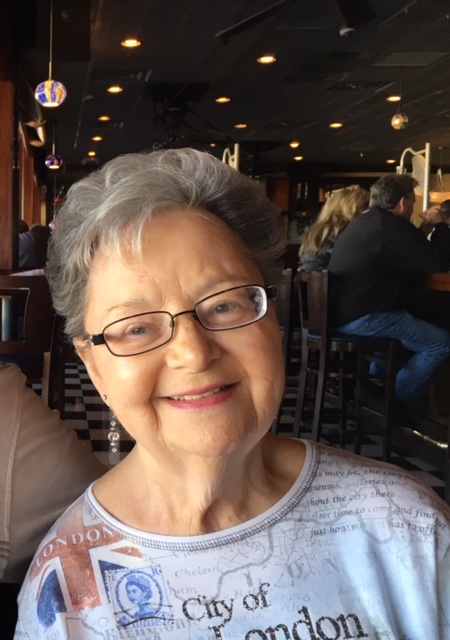 She was born September 10, 1938, in Chicago, to Reginald and Irma Moir. After high school, her father urged her to take an IBM keypunch training program in the Austin area of Chicago, then she found work at the Caterpillar company in Joliet. She took classes at Joliet Junior College and then worked for a supply company as a secretary.

Although Dotty’s parents did not attend church, a friend took Dotty and her siblings to Sunday school at First Covenant Church in Joliet. Her involvement there led Dotty to attend Covenant Harbor Bible Camp in Lake Geneva, Wisconsin, where she committed her life to Christ. She joined Covenant Caravan, a group of six students who traveled to churches as missionaries, training teachers and ministering to youth. Dotty used her artistic gifts doing chalk drawings while other team members sang and played instruments and shared messages, and she made lifelong friends in the group. In the fall of 1961, she enrolled at North Park College, and while she was a student she joined a group from First Covenant Joliet to help plant a new church called Calvary Covenant, now known as Good Shepherd Covenant Church in Crest Hill, Illinois.

She met Craig at Covenant Harbor, and they married on June 15, 1965. They moved to DuBois, Pennsylvania, for Craig’s pastoral internship year, during which Dotty taught school. They served Oakdale Covenant Church in Chicago, participating in the transition to Willie Jemison’s pastoral ministry. They then served churches in Menomonie, Michigan; Berkeley, California; and Chicago (Edgebrook). Upon their return to the Chicago area, Dotty began her tenure at Covenant Offices, working in the Department of Ministry. Craig became associate superintendent of the Central Conference.

Dotty is remembered for her quick wit, as well as her authenticity. She was a voracious reader and an artist, studying cooking and sewing, quilting, rosemaling, and stained-glass-making.

In retirement, Dotty and Craig moved to Covenant Living of Florida in Plantation. She was preceded in death by her parents and a daughter, Heather Christine. She is survived by her husband, Craig, daughters Dawn Anderson Perkins and Stephanie Anderson, five grandchildren, one great-grandchild, a brother, Tom Moir and a sister, Karyn Hoyt.

A memorial service will be held later in the fall. Peace be to her memory.