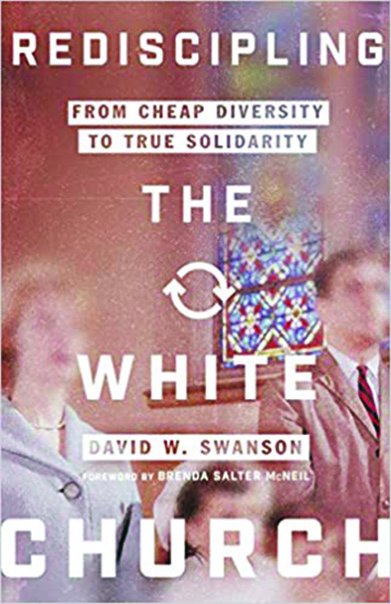 “In the spiritual battle for a more reconciled church, every single majority-white congregation has a significant role to play, and it begins with discipleship.” These words from the introduction to David Swanson’s debut book, Rediscipling the White Church, give a sense of the kind of work this is going to be—invitational, full of truth, accessible yet deep, and not playing around when it comes to the particular work required of white Christians who want to more fully follow Jesus. This delightful mix mirrors the author himself in many ways; Swanson, who serves as pastor of New Community Covenant Church in Chicago’s Bronzeville community, is genuine, thoughtful, and kind—but also reliably, soberingly prophetic. His voice combines a deep love for the church with a profound dissatisfaction with the ways it has participated in racial injustice. He keeps calling us all back to our kingdom goal.

In part one, “From Cheap Diversity…,” Swanson explains how we who have been formed in our faith through primarily white communities have in fact been “discipled by race,” “concealed by race,” and even “wounded by race.” Not seeing whiteness in our discipleship leads churches to try to fix things by increasing and celebrating “diversity”—which Swanson shows to be a thin, often harmful attempt that does not get at the fundamental gap of the white church’s segregation and what’s missing in our discipleship. Swanson shares his own work of recognizing whiteness as a white man, and stories of pastoring a multicultural congregation in a majority African American neighborhood in Chicago to weave a clear but profound argument: “White Christianity has been blind to the powerful racial discipleship that has formed the imagination of white Christians.”

Swanson deftly and accessibly moves through introductory questions (i.e., is racism really addressed in the Bible? what is whiteness?), then probes deeper into struggles such as white fragility, deformed imaginations, collusion, and the profound costs of racial injustice.

Throughout the book, Swanson interacts with well-known authors who address racial identity/justice (i.e., Bryan Stevenson, Ta-Nehisi Coates, James Baldwin, Chanequa Walker-Barnes, Austin Channing Brown, Jennifer Harvey, Christian Smith, and Michael Emerson). He also sprinkles in philosophical, legal, historical, and other wide-ranging sources of expertise. The result is that the reader learns from different voices, in creative and integrative ways, a fresh framework with which to engage and re-examine the familiar goals we seek in the church—reconciliation, diversity,  justice, and discipleship. This section shows us the problem with how much white Christians’ way of doing church has been shaped not just by the Bible but by whiteness itself. Once we have been clearly shown this discipleship dilemma, however, there is no shame or burden levied, but rather an invitation to move forward.

The white church desperately needs this truth,
this re-forming,
and this capacity to confess the sins of racial injustice
and to follow Jesus into the kingdom.

The majority of the book is filled by part two, “…To True Solidarity.” With a driving sense of hope, biblical narratives rooting each chapter, and practical everyday suggestions, Swanson reimagines seven ways of inhabiting church rhythms for white Christians to consider. He walks the reader through both theory and examples to uncover this extraordinary possibility—that when we intentionally take up habits to move us out of the ways whiteness has limited us, white churches are fully freed to be discipled into the kingdom’s true reconciled reality of solidarity. Practices include table fellowship, kingdom preaching, subversive liturgies, children’s ministry, presence, uncommon friendship, and—a title that gave me chills—“Salvation from Superiority.”

The rich content in each chapter is educational but also easy to digest. Readers get a window into the sustained and embodied work of this pastor and leader whose life has obviously been shaped by both the white church and faithful people of color. By naming his own location in whiteness and inviting white Christians to see and then do the same, Swanson models discipleship on each page.

He offers both specific and nuanced answers to many common questions that white churches who desire to engage in racial justice will face. On evangelism, he writes: “Rather than abandoning new Christians to privilege and supremacy, white churches can invite people to follow Jesus into the kingdom of God to become like Jesus in order to do what Jesus does. Here is a foundation strong enough to confess the sins of segregation and racial injustice while building toward solidarity with the body of Christ.”

The white church desperately needs this truth, this re-forming, and this capacity to confess the sins of racial injustice and to follow Jesus into the kingdom. As I write this review, our nation is reeling. Black communities are weeping as a result of the police murder of George Floyd, just days after the painful news about the murders of Ahmaud Arbery and Breonna Taylor. The black church, and other churches of color, are paying for the white church’s inability to see rightly with their very lives.

If we truly believed and engaged in what faithful leaders of color have been telling the white church for generations about the deadly and persistent cost of whiteness, we white Christians would live differently, vote differently, and engage in this spiritual battle of racism as if our lives depended on it. Swanson names it plainly: “The end result of racism is to wreak havoc on the lives of particular people. It is an attack on the bodies and minds of women and men created in the image of God. It is dehumanizing. It is demonic. Therefore we must not look away.”

I would boldly suggest that this book is one of the most necessary and timely resources for the church in our nation today. Swanson has invited white Christians to deeply grapple with the ways we have been blinded, misinformed, and malformed by whiteness. He identifies where we have been weakened and suggests new ways to become stronger and so more faithful. For all white Christians who desire to follow Jesus more closely—whether you are brand-new to the conversation around race or you’ve been on this journey of awareness for some time—you will find something to encourage, reframe, challenge, or motivate you in this work. 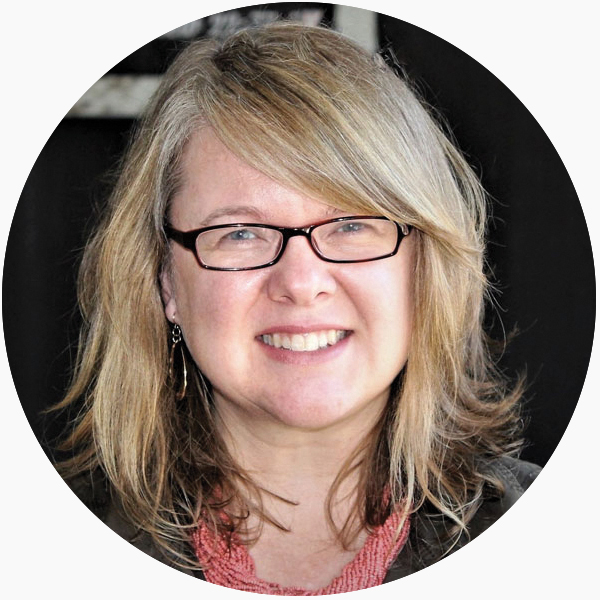 Liz Mosbo VerHage is an associate pastor at Quest Church in Seattle, Washington, and currently serves as the ECC Ministerium president. She is also an adjunct professor, speaker, coach, and author. She loves ordering Thai food, singing on long drives, and game nights with her two kids and husband, Peter.