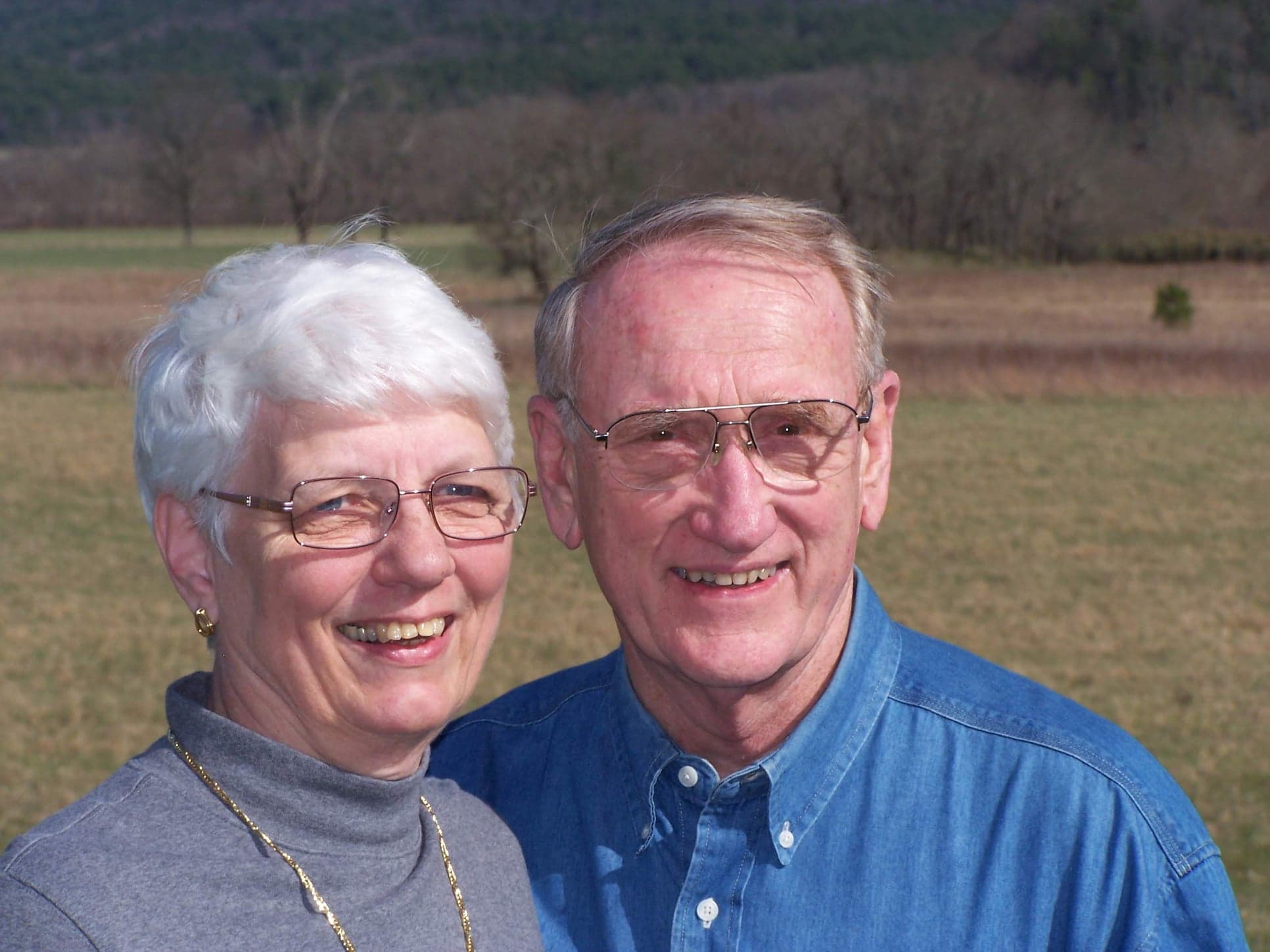 NORTHBROOK, IL (June 6, 2020) – Robert S. Thornbloom, retired Covenant missionary engineer whose life was devoted to the work of the church in the Democratic Republic of the Congo, died Wednesday, June 3, from complications of Alzheimer’s disease. He was 82.

Bob was born on March 15, 1938, at the Karawa mission station in the Ubangi region of what was then called the Belgian Congo. His parents, Wallace Thornbloom, a doctor and pastor, and Sarah Westerfield Thornbloom, a nurse, were among the first four Covenant missionaries to DR Congo.

Because of the work demands on his parents, Bob was cared for by Congolese babysitters and he learned to speak Ngbaka, a tribal language, before he learned English. His longtime friend and fellow missionary Eileen Thorpe recalled Bob’s mother saying she would sometimes have to ask the caretakers what Bob was saying, as she did not speak the language.

From an early age, Bob showed a desire to help out wherever he could. Since much of his elementary and high-school education was done by correspondence, there was often a delay from when he mailed his coursework in to when the next batch arrived. When he was about 15, Bob went to the missionary who was in charge of the mission station’s garage and asked if he could lend a hand. At the time, the missionaries took turns caring for the trucks and other machinery at the station. “The missionary in charge that month took out the keys, handed them to Bob, and that’s how he got to be in charge of the garage,” said Chuck Thorpe, son of Bob’s close friends Roger and Eileen Thorpe.

Bob graduated from North Park Academy in 1958 and then attended North Park College, graduating with an associate degree in 1960. While there, he began dating Janet Strom, a classmate at both the academy and college. They married on August 13, 1960.

In 1963, after Bob graduated with bachelor of science degree in mechanical technology and industrial engineering from LeTourneau University in Longview, Texas, he and Jan were called by the Covenant Annual Meeting for missionary service.

Bob served as director of technical services and development at Karawa, maintaining the station’s truck, building a water supply system (with the help of a waterwheel in a nearby stream), constructing airstrips, and eventually designing and building a multi-million-dollar hydroelectric dam on the Zulu River to provide 24-hour power for the hospital at Karawa. That project, funded by Covenant World Relief, USAID, and donors in Germany, took years to complete and provided power to the hospital for decades.

Jan worked by his side. A teacher by training, she kept the books, ran the back-office operations, and kept track of Bob’s myriad and far-ranging projects. “My dad could not do what he did without my mom,” said Bob’s younger daughter, Twyla Becker. “They were a dedicated, committed team.” 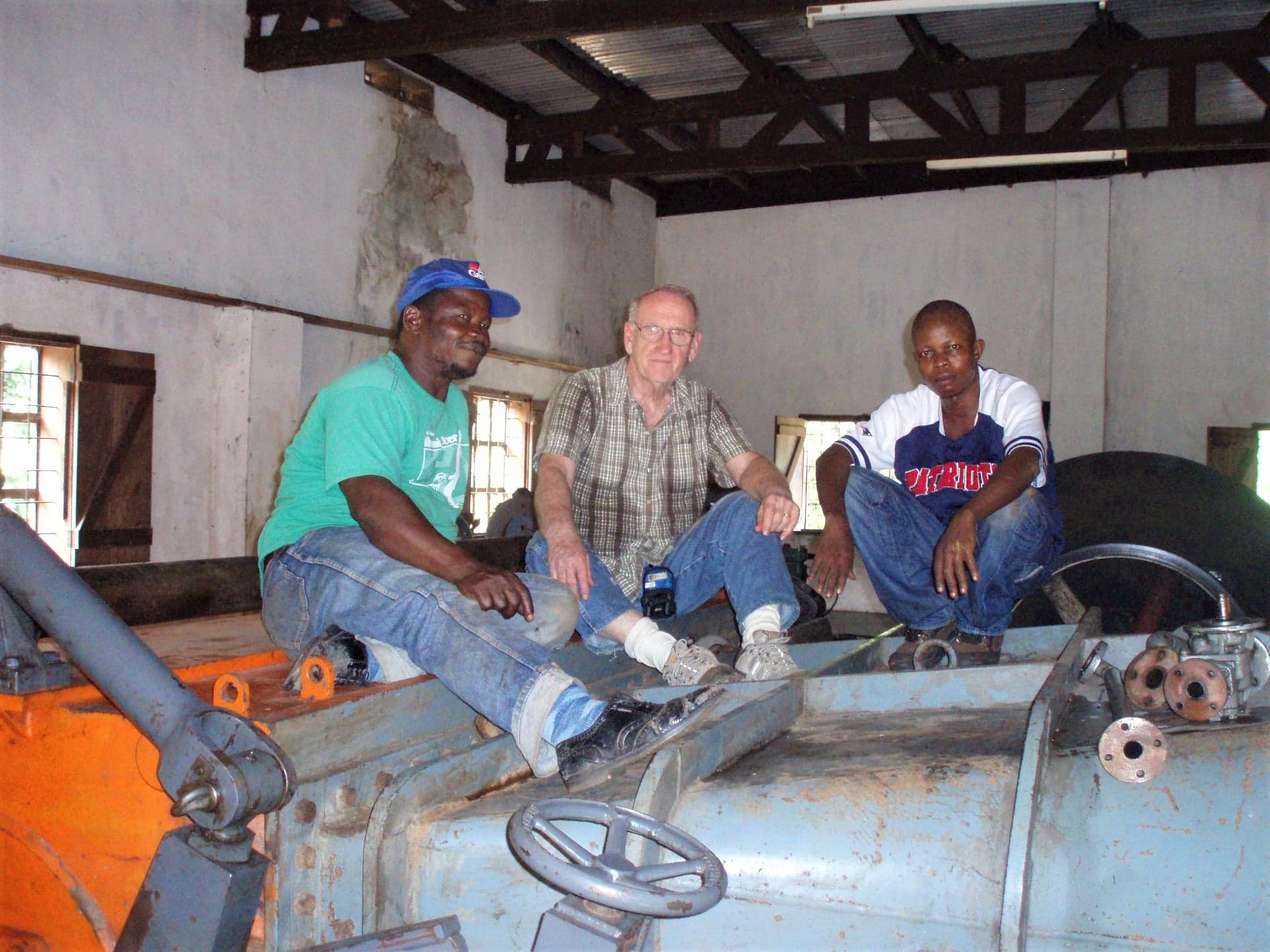 Bob saw his mission as serving others. He brought technical genius and an ability to use whatever he had at hand to fix any problem to his mission work. He kept the lights on and the truck running and took care of countless other details so others could do their work.

“I remember hearing Bob talk about how he’d see his dad come home from surgery and have to work to fix the light plant, or have to fix it so it could run and he could do surgery,” said his missionary colleague Peter Ekstrand. “Bob’s comment was that a doctor shouldn’t have to also fix the light plant.”

President Mboka of the CEUM, the ECC’s sister church in DR Congo, sent Ekstrand a letter of condolence and appreciation after hearing of Bob’s passing. The letter expressed how beloved Bob was by the church there.

“There is an expression in the Ngbaka dialect that will remain with us until the end of the world ‘da me Babi de do wi Karawa me a ge?’ (Is there anything bad which Bobby has done for the inhabitants of Karawa?)” he wrote. “The Zulu hydroelectric dam which gives electricity to Karawa mission and numerous small hydropower dams are the work of his ingeniousness. He introduced the CEUM to sawmills. As of today, many churches have been built thanks to these machines.”

Bob’s ingenuity was legendary. He introduced portable sawmills that could be taken to where trees were being logged, transporting them on a homemade vehicle that was dubbed “Chitty-Chitty Bang Bang,” after the famed children’s book. He always had a project going—raising cattle and chickens and goats and setting up small businesses for the benefit of the community.

Bob was a master of “fiasco engineering”—the ability to fix things using whatever he had at hand. When a truck once broke down on the road and there was no toolbox at hand, he used a rock and a tire iron to fix the brakes. When the water faucet stopped working on a boat the family was traveling on, he pulled off his belt and used the buckle to remove part of the plumbing in order to fix it, said Chuck Thorpe, who grew up at Karawa.

More than a great mechanic, Bob was a beloved father and friend, known for his storytelling and his love of singing—Eileen Thorpe recalled Bob and Jan singing “Surrey with the Fringe on Top” to entertain other missionaries and hearing him often singing hymns at the top of his lungs.

“On a personal level, he was cool,” said Chuck. “He drove trucks and he had motorcycles and he hunted and he knew how to weld and he told stories and, and he invited us into that circle of friends.”

When his friend Roger Thorpe was seriously injured in a motorcycle accident, Bob rushed to be at his side in the operating room. He hated the sight of blood but that could not keep him away.

“He came down to the hospital and held my hand and Roger’s hand and braved it out just to be supportive,” Eileen said. “When something was wrong, Bob was there,” she said.

In 1994, at the height of the Rwanda genocide, Bob and Jan were sent to the city of Goma to work with unaccompanied minors who had been separated from their parents. The Thornblooms worked to help children find their parents, and Bob found resources to support the foster parents who were taking in refugees. 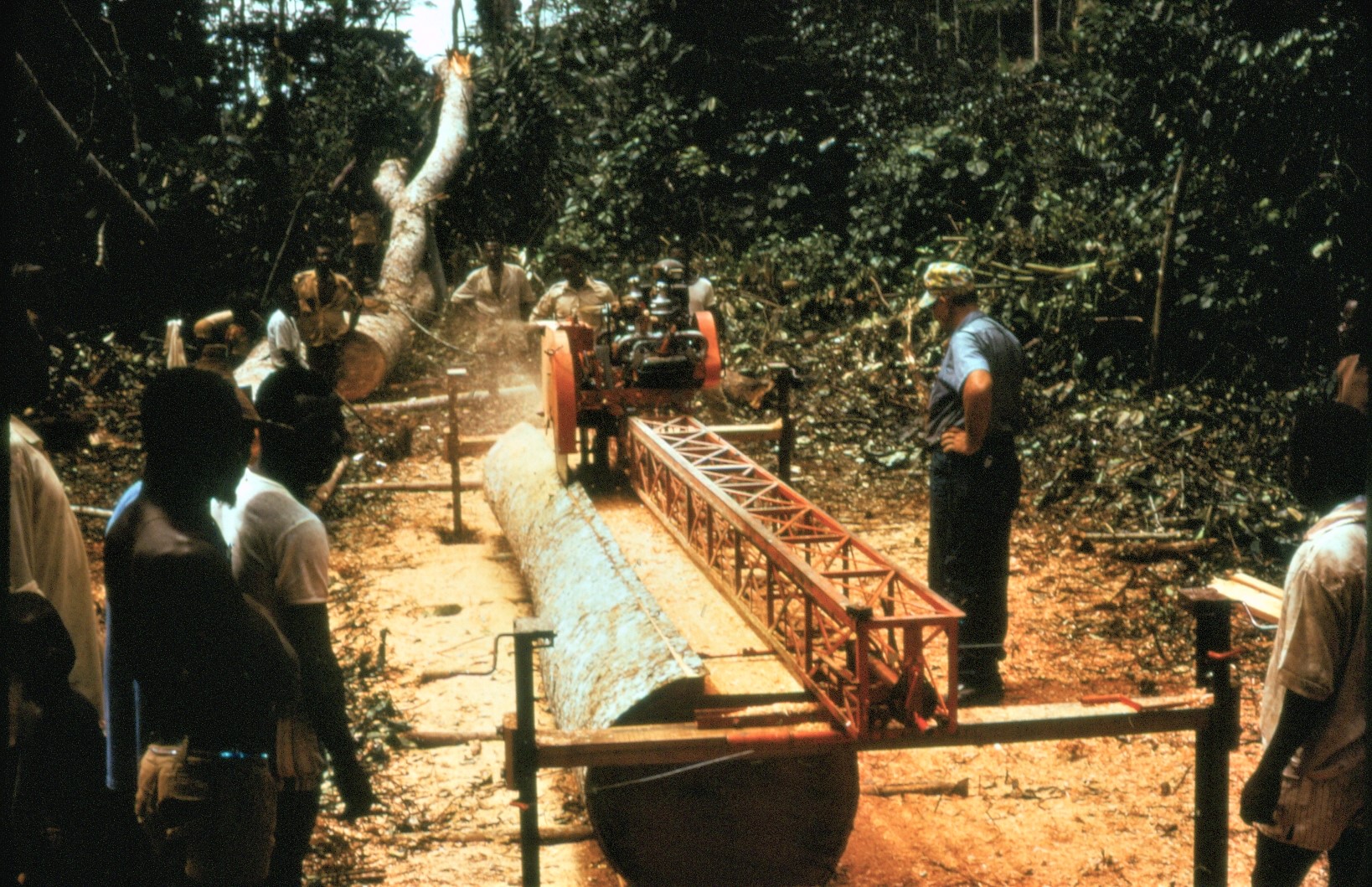 Curt Peterson, the former head of Covenant World Mission, recalled a story that Bob told of going to a general who was the head of soldiers in the area, and insisting that he help provide resources.

“The minute Bob started speaking in Nbaka, the general knew he had to listen,” said Peterson.

Peterson said Bob’s dedication and perseverance were also legendary. “There was always so much to do and it needed to be done now. And he knew how to use political connections—he knew several Congolese government leaders—to get things done.”

Bob also was a role model for how modern missions work is done, said Peterson. He was born in Congo when it was a Belgian colony and where missionaries were seen as high-profile members of society, whose job was to enlighten the locals, rather than to serve alongside them.

Over the course of his life, Bob saw that change. To him the people of Karawa and Congo were friends and family and that shaped his approach to missions.

Bob had skills and a passion for teaching—for passing on what he knew. Many of the technical workers in the Congolese church—who today are repairing bridges and running sawmills—were first trained in Bob’s garage.

“His work outlives him,” said Peterson. “In terms of his missiology, he was 50 years ahead of his time.”

Chuck Thorpe put it this way: “Bob was never the star of his own story.”

The Thornblooms returned to the United States in 1996, when Covenant missionaries were evacuated due to unrest. They settled in the neighborhood near North Park University in Chicago and were devoted members of North Park Covenant Church.

Their ministry did not stop after leaving Congo. Jan served as an investment coordinator for National Covenant Properties. Bob worked as a consultant to the work in Congo and traveled back and forth until his health declined in recent years. The Thornblooms also worked with Covenant World Relief and the Paul Carlson Partnership and on micro-enterprise projects for widows in Congo.

“Every person has been given one life to make a difference in the world. One must choose carefully to be sure it will be significant. If you are fortunate, you can make this difference where your dreams exist and your heart lives,” Jan told delegates gathered at the 2007 Covenant Annual Meeting at a ceremony marking their retirement. 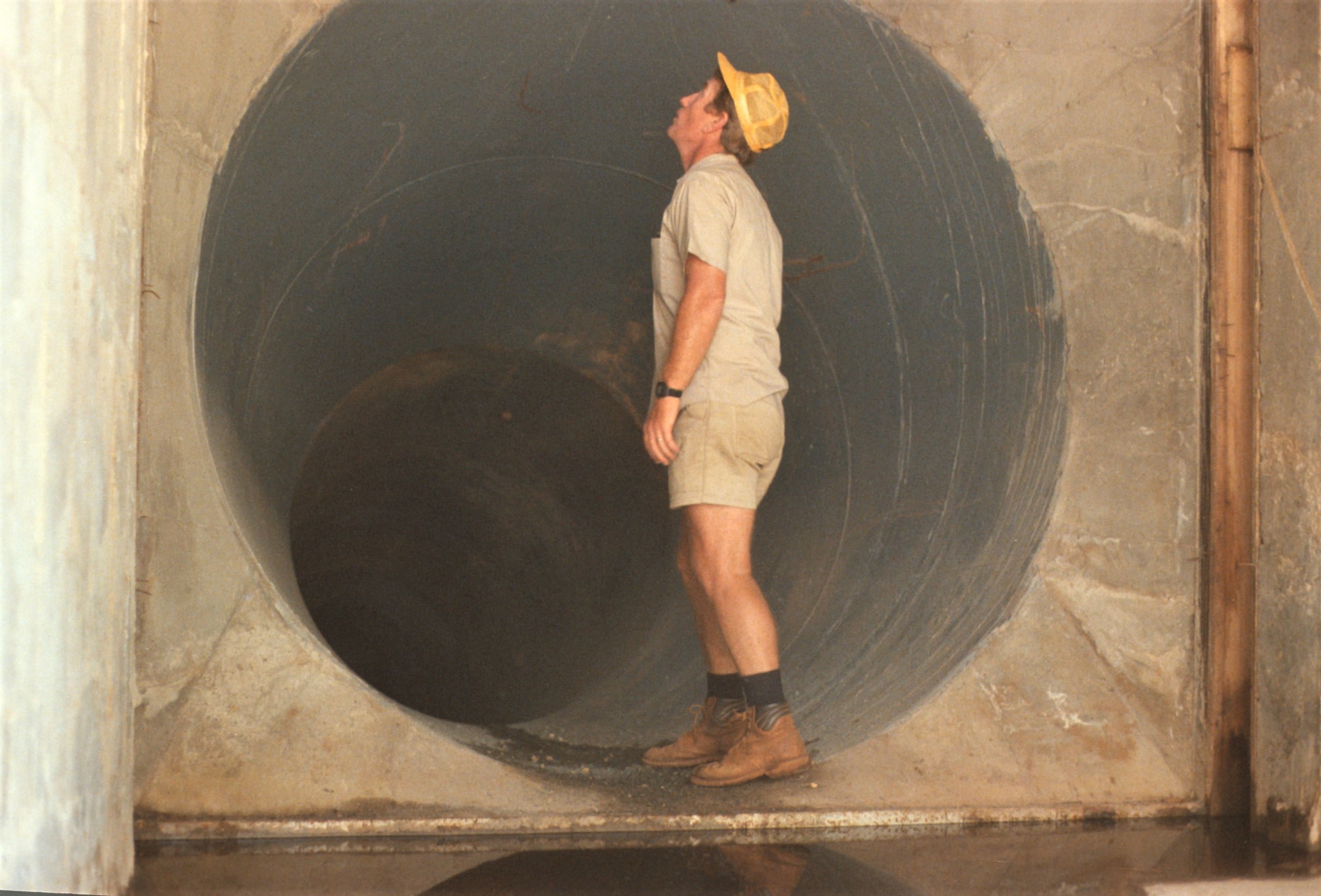 Along with their mission service, the Thornblooms were devoted to each other and to their family. Bob could often be found wrestling on the floor or working on projects with his grandchildren.

The Thornblooms moved to Covenant Village of Northbrook in 2015.

Bob was preceded in death by Jan in 2018, and by his sister Beverly, who died as a child in Congo. He is survived by three sisters, Karin McInturff of Wauconda, Illinois, Lois Sundberg of Moline, Illinois, and Judy Jacobson of Largo, Florida; three children, Beverly Hawkins (John) and Twyla Becker (Chris) of Wildwood, Illinois, and Mark (Dena) of Cocoa, Florida; and four grandchildren.

A virtual memorial service will be held on Saturday, August 15, with a slideshow beginning at 2:45 p.m. Central time, and the service at 3:00 on YouTube at this link. The service bulletin is available here.