The Nome-based station, which celebrated its 60th anniversary on April 17, is a ministry of the Alaska Conference. KICY serves native Alaskan villages throughout the Seward Peninsula, Yukon and Kuskokwim Deltas, and the Russian regions of Chukotka, Kamchatka, and Siberia. 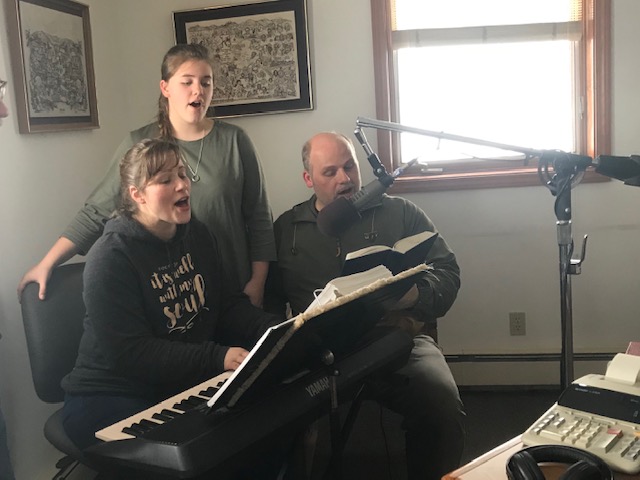 Although the villages are off the road system, they have been vigilant to observe stay-at-home orders. The influenza epidemic of 1918 nearly wiped out much of the population. And still today, those who are sick can only reach a hospital by plane.

“At a time when people are stuck in their homes, we’re playing an important role in helping people stay connected, and we’re taking that responsibility seriously,” Burchell said. She noted that a survey conducted by the local school district found that 50 percent of students in Nome don’t have internet access. That makes the radio station even more important, she says.

During the month of April, the station also played live hymn sings led by Nate and Carlee Hobbs, as well their children, who performed from home, singing songs requested by the audience. The couple have ministered in Nome in various capacities for 15 years, including serving as part of the worship team for Nome Covenant Church. Nate is joining the staff at KICY as program director.

Other connections take place on Sunday mornings. Each week, a Covenant pastor leads a live service, through a variety of technologies. “One pastor chose to run a Facebook Live service alongside the KICY service. We provided recorded music before the sermon, and he placed a phone near his preaching location so we could pick up the audio when we switched to him for the sermon. Another pastor set up a Zoom call for us, so we called in, and they provided the whole service—live music from the home of their worship leader and the sermon live from the pastor.”

The station provides music requests from pastors. The selections come the library of locally performed music that KICY has recorded at church conferences or other gatherings. Some of it has been sent to the station by local artists. “It has a very local feel—like you were in any of the churches in our region,” Burchell said.