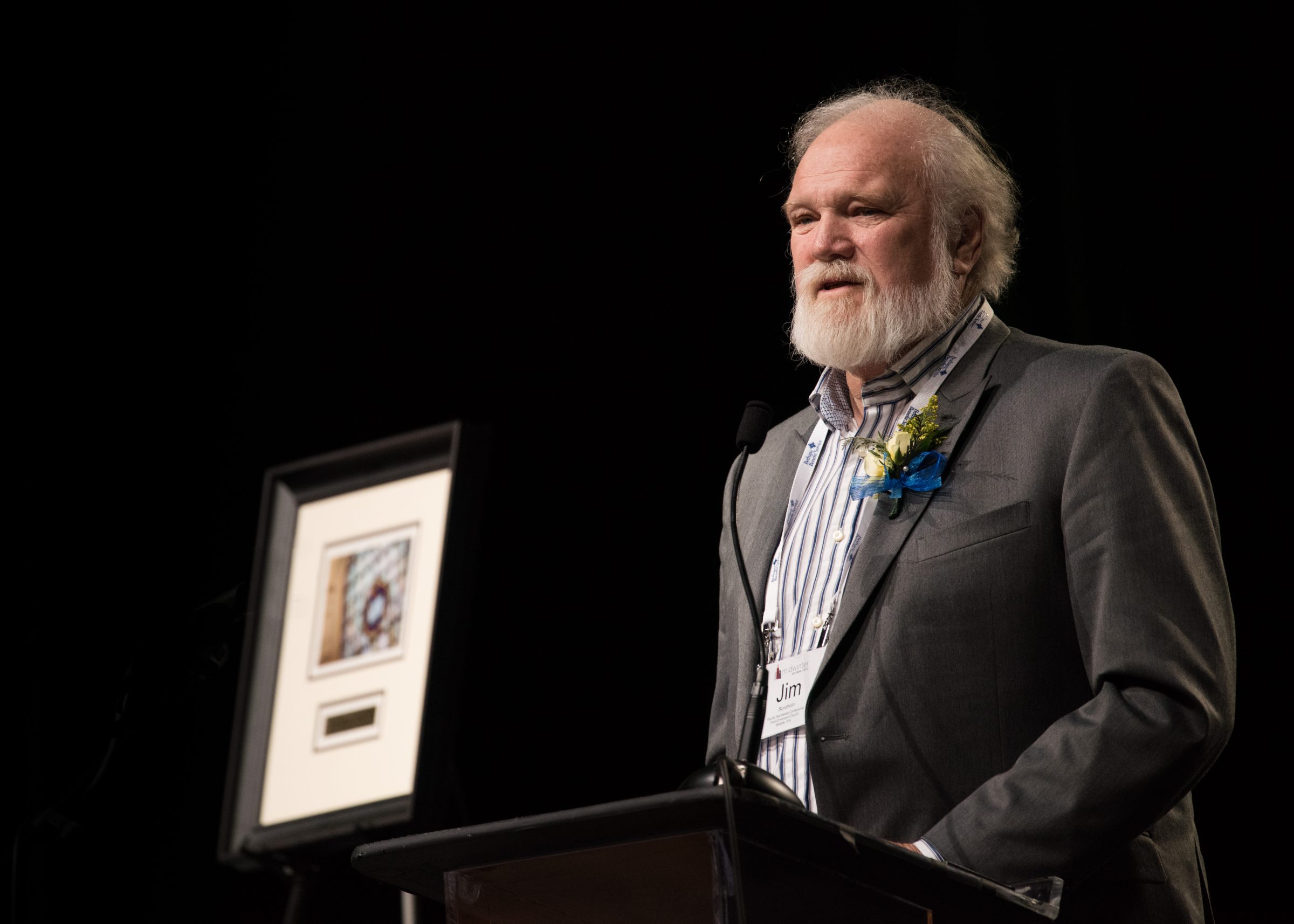 Jim Sundholm was presented with the North Park Theological Seminary Alumni Award for Distinguished Service in 2016.

VASHON, WA (March 27, 2020) — Jim Sundholm, who served the poor around the world as a pastor, director of Covenant World Relief, and executive director of the Paul Carlson Partnership, died today at the age of 74.

“We have lost our finest pastor-prophet,” said Dave Kersten, dean of North Park Theological Seminary. The school presented Sundholm with its Alumni Award for Distinguished Service at the 2016 Midwinter Conference.

“Jim was a hero to many, including me,” said Dave Husby, the current director of Covenant World Relief. “He deeply loved and cared for the poor, the marginalized, and the oppressed. He refused to keep quiet about injustice, and he was one of the funniest persons I have ever met. Jim patiently mentored me, opened my eyes to the deep brokenness of the world, and he demonstrated through his life how to love people the way Jesus loves them.”

In a recent letter to Sundholm, Husby wrote, “I can say with all confidence that without you as my predecessor in CWR, I would never have even considered pursuing the position. You built CWR into an amazing ministry that made me want to be a part of it. You often talked about standing on others’ shoulders, but I stand firmly on yours.”

Former ECC president Gary Walter, said, “Jim was a forerunner, a John the Baptist figure in preparing the way of the Covenant to love mercy and do justice. And he never lost sight of evangelism. Jim embodied the Covenant’s missional instincts: God wants lost people found and hurting people helped—everyone, everywhere, every time.”

In 1972, he began his ministry at Community Covenant Church in a low-income neighborhood of Minneapolis, starting as director of Christian education and eventually becoming pastor.

In 1996, Jim began serving in the Northwest Conference of the denomination as a support to congregations and pastors, in youth leadership development, and in urban/ethnic ministries.  Under the leadership of his associate, Jerry Rice, he became involved with a South Sudanese refugee congregation in Sioux Falls, S.D., which led to trips with Jerry to refugee camps in Ethiopia and South Sudan.  This began the eventual development, with Sudanese leaders and pastors, of 400 congregations of the Evangelical Covenant Church of South Sudan and Ethiopia.

James Tang, a South Sudanese refugee said Jim helped enable him to serve as a missionary to his native country by arranging church visits throughout the United States. He also praised Jim’s courage in traveling to a dangerous part of the world.

Tang recalled a trip in 2005: “Our car has a flat tire in the middle of the road, where the North Sudan Islamic soldiers and its rebel moved around.  I was worry about him maybe we would be found by rebel so our driver would be killed and Jim may be kidnapped.  Jim has never been panic or worry, but his faith was strong even in the time of stress.”

Jim also became sick while on the trip.  “I told him that we have to return back and cut our trip. Nevertheless, Jim insisted that we have to continue on our trip regardless of this sickness. I was very impressed with how Jim had endurance even though the situation was not conducive.”

From 1999 to 2009, he served as director of Covenant World Relief and as executive director of Paul Carlson Partnership. He guided the Covenant’s response to the devastation left behind by Hurricane Katrina in 2005.

In a 2011 sermon, Sundholm exhorted, “Jesus invites us to lay aside a selfish life in order that a better life might arise. In order that our own parochial interests might give way to a discovery of God’s desire for a fuller, better humanity. The good that God has given us is not just a potential, but a reality to be lived out in unselfish service for the good of others.”Sundholm was born on June 13, 1945, in Seattle, where he grew up attending First Covenant Church. He graduated with a bachelor of arts from North Park College and a master’s of divinity from North Park Theological Seminary.

He had the gift to see the people he worked with, be they wealthy, poor, powerful, or marginalized, as equal brothers and sisters in the struggle for justice and grace.

His self-deprecating humor was on display when he received the seminary’s Alumni Award at the Midwinter Conference. Sundholm told the one thousand pastors in attendance that when he left Seattle to attend North Park College, “I was voted outstanding Christian teenager, and they gave me a trophy for that, and obviously I was quite impressed, so I knew that North Park was really going to get something special.”

Over time, he said, “I learned that I needed North Park more than North Park needed me.”

However, people who knew Sundholm were saying repeatedly on social media throughout the day, it was the Covenant who needed him.