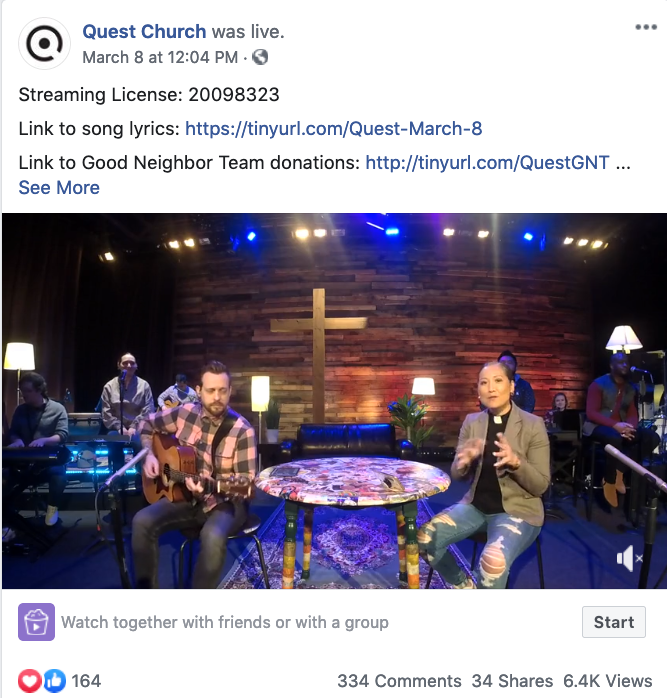 Quest Church in Seattle, Washington, canceled their in-person service on Sunday but did livestream a service for the first time.

North Park University and other Covenant entities also are adjusting procedures in response to the virus. The Covenant’s Executive Board meeting scheduled for this weekend will be held via video conferencing. “We’ll only be addressing topics that the board has to take action on and send to the Annual Meeting,” said President John Wenrich.

Wenrich praised churches for taking precautionary measures. “I am grateful that our congregations are taking this seriously and that they are making adjustments as necessary.”

Quest Church in Seattle and Radiant Church in neighboring Renton canceled in-person worship but livestreamed services on Facebook Live. Both churches are located in King County, which had recorded 17 deaths as of Sunday evening, the largest number in the United States. The first reported case of coronavirus (COVID-19) in the United States occurred in nearby Snohomish County.

It was the first time Quest had livestreamed a service. In an email to the congregation, pastor Gail Song Bantum said, “We do not lead and respond out of fear, but out of love and care for our church and the wider community. This is the ‘why’ that drives our decision. We want to do our part as members of the community to reduce the number of people infected and protect those who are at higher risk.”

All other church activities also have been canceled. Bantum said leaders have not set a date for resuming in-person services but would base their decision on prayer and consultation with health officials.

Radiant made the decision on Saturday to cancel services in their building on Sunday and on March 15. Pastor Michael Thomas said at the beginning of their livestream, “Our building was closed for safety concerns, but how many of you all know no disease, no fear will stop the church from coming together to worship God in Spirit and in truth? We thank God for technology that gives us a way where we can still say virtually, ‘I was glad when they said unto me, let us enter into the house of the Lord together.’”

In California, Michael Hill, director of worship experience at Marin Covenant Church, said the church decided to cancel services this coming Sunday after the county Department of Health and Human Services urged the cancelation of gatherings of more than 100 people. 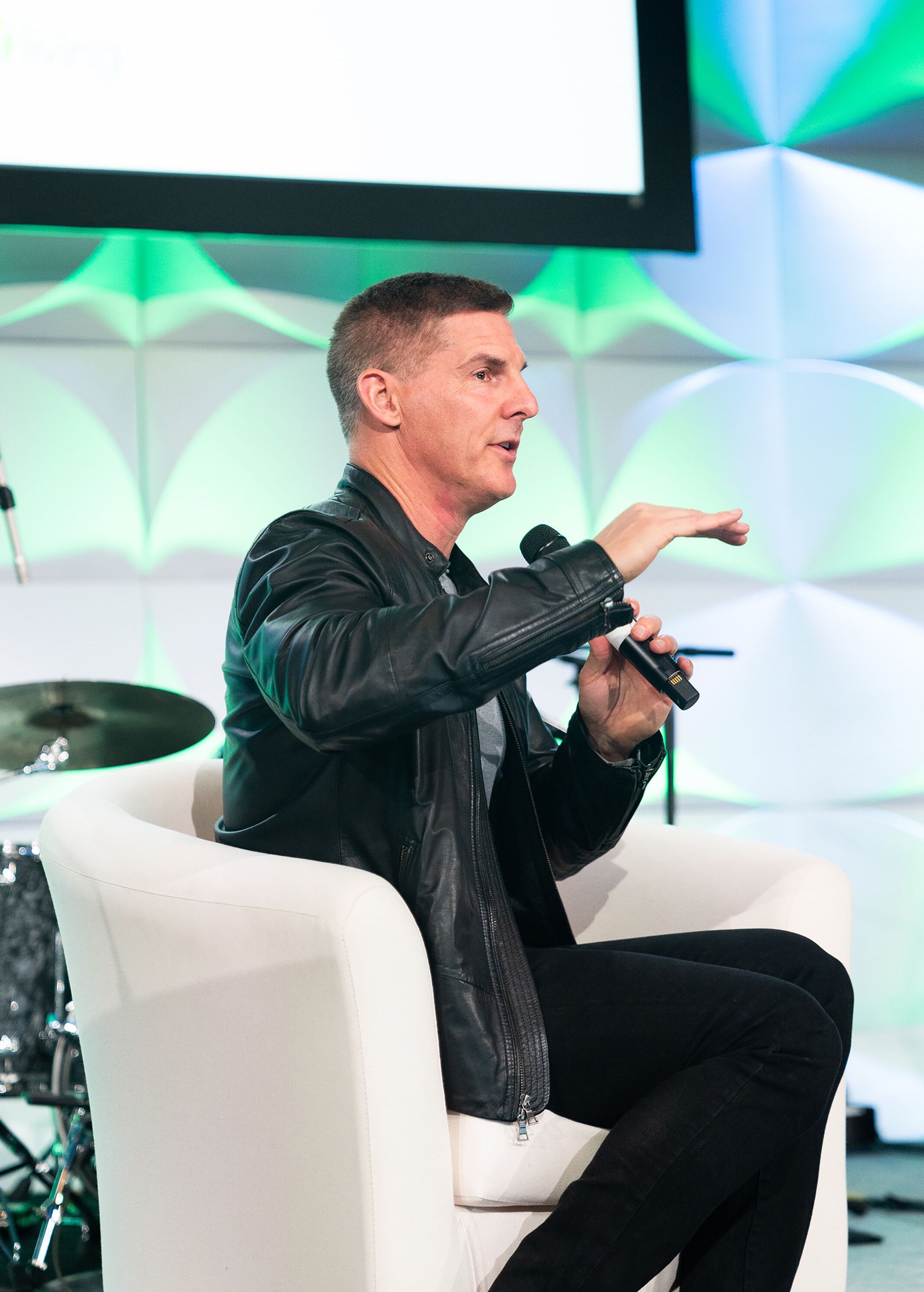 Craig Groeschel, pastor of Life.Church, spoke to a gathering of leaders from Covenant Living Communities and Services before leaving for Germany.

Craig Groeschel and Bobby Gruenewald, pastors of the Covenant congregation Life.Church, have self-quarantined for 14 days after attending a conference in Germany that was cut short when a presenter was identified with COVID-19. Groeschel is the senior pastor of the Oklahoma-based mega-church and Gruenewald is the pastor of innovation and founder of the popular YouVersion Bible.

On Sunday, Groeschel spoke by video from his bedroom to 90,000 attenders across 34 campuses in 10 states and told them neither of the men was showing symptoms. He asked for prayers for his family.

“I don’t think we need prayers for our health,” he said. “I need prayers because I haven’t seen Amy or my kids in a long time.”

Other churches across the country made adaptations to their Sunday services. Rather than pass offering plates, churches invited members to drop their offering in designated baskets as they left the sanctuary or to give online. Pastors also said they were changing the way they served communion, including forgoing intinction, having servers wear non-latex gloves, or using self-serve packets that include wafers and juice.

Churches also made additional hand sanitizer available and encouraged people who were sick to stay home.

North Park University activated their Emergency Management Team. “The team stays in close contact with the Chicago Department of Public Health and follows the guidance of the Centers for Disease Control and Prevention,” said president Mary Surridge. “We are planning contingencies for various scenarios that could come up as this outbreak evolves, and the team will make recommendations to the university’s senior leadership.”

The university canceled all school-sponsored spring break international trips this week. Surridge said the decision was based on general advice given by the CDC and that other Chicago universities also were canceling international travel. Trips to Italy, Honduras, Ecuador, India, and Mexico were canceled.

“A lot of planning and anticipation surrounded these trips, and we shared in the disappointment caused by their cancellation,” Surridge said. “However, the health and safety of our campus community is the highest priority.”

The school is developing a website that shares resources and updates information. It will be ready by the time students return from spring break next Monday, Surridge said.

Covenant Living Communities shared in a letter with residents that the organization has assembled a task force to monitor the situation and implement any necessary emergency protocols. Residents and staff were asked to let their executive director know if they or someone else in the community had traveled to a foreign country.

Covenant Offices is encouraging people to take precautions that include using TeleHealth and urged employees to stay home if they show signs of illness and to take computers home at night in case a health emergency is determined. Anyone living or traveling through an area that is declared a “State of Emergency” is to “refrain from coming to the office or attending meetings for at least the 14-day quarantine period to ensure that you did not contract the virus. This would be the same for guests engaging in meetings or trainings that your mission area is hosting.”

Serve Globally has urged personnel serving in other countries to take precautions but has not required anyone to return to the United States.

Asia regional coordinators Bob and Grace Shim encouraged personnel to stock up on important prescriptions and health supplies. Many countries are anticipating supply-chain interruptions because most prescription drugs and medical supplies are manufactured in China.

The Shims added that people should have a good supply of non-perishable food and household items at home, although they cautioned against hoarding.

Stephen Cushing, executive director and senior chaplain at New England Seafarers Mission, a Covenant ministry to ship workers, already has served industrial ships without restrictions. The first cruise ship to dock since the initial reports of the virus outbreak in China is scheduled for April 8.

The ministry serves officers, guest services staff, cooks, and custodians from as many as 167 countries. Up to 25,000 ship staffers come through the mission each year. (To read more about the mission, see “Harbored.”)

Cushing said he has had helpful conversations with the United States Coast Guard, who informed him that only they and the CDC have the authority to close the terminal due to concerns about the virus.
Each ship is required to alert each port of any confirmed health issue of crew before arrival, which has been standard operating procedure before coronavirus, Cushing said.

Several of the 23 Covenant churches in Japan have decided to cancel services for at least two weeks, said Grant Buchholtz, who is among Serve Globally personnel ministering in the country. Most, however, are meeting with added safety precautions such as wearing masks and making hand sanitizer more available.

A letter from the chair of the Japan Covenant Church, Tatsuya Kogure, to each congregation said local churches should make their own decisions about whether to close based on health recommendations in their areas. Among other recommendations, Kogure wrote, “While the Lord’s Supper is an important part of worship, it should not be observed during March. For April and thereafter, the state of the virus in Japan will have to be considered before reinstating communion in worship.” He urged churches to cancel all other in-person meetings through March.

A mission trip that involved two churches also was canceled. “Once the government encouraged schools to close for the month, this made it much easier to make the tough decision to also cancel physical meetings and move small groups and other meetings online,” Buchholtz said.

“One blessing in this is that one of our tech leaders has been wanting to stream our services for a while, and this gave us the opportunity to try this out and reach more people,” said

Buchholtz, who ministers at Tokyo Life Church. “Once we finally get back together, we imagine that we will continue offering a livestream for those who can’t attend, those who are sick, or new people who might want to check us out first online. We hope this will be a chance to share hope with more people, especially in this time of anxiety and worry.”
He added, however, that most churches are small with older populations, which makes technological solutions more difficult to implement.

A town hall meeting that included discussion with pastors and medical personnel is a helpful resource.

General Resources
Health experts in the United States say it is important to take the spread of the virus seriously but cautioned against panic and urge people to obtain their information only from credible sources such as the World Health Organization, the Centers for Disease Control and Prevention, and National Institutes of Health.

For additional information on how churches can respond, the Pacific Northwest Conference posted a link on their Facebook page to a video of a town hall meeting held at University Presbyterian Church in Seattle. The townhall included pastors of several churches as well as medical professionals. “It’s excellent,” said superintendent Greg Yee.