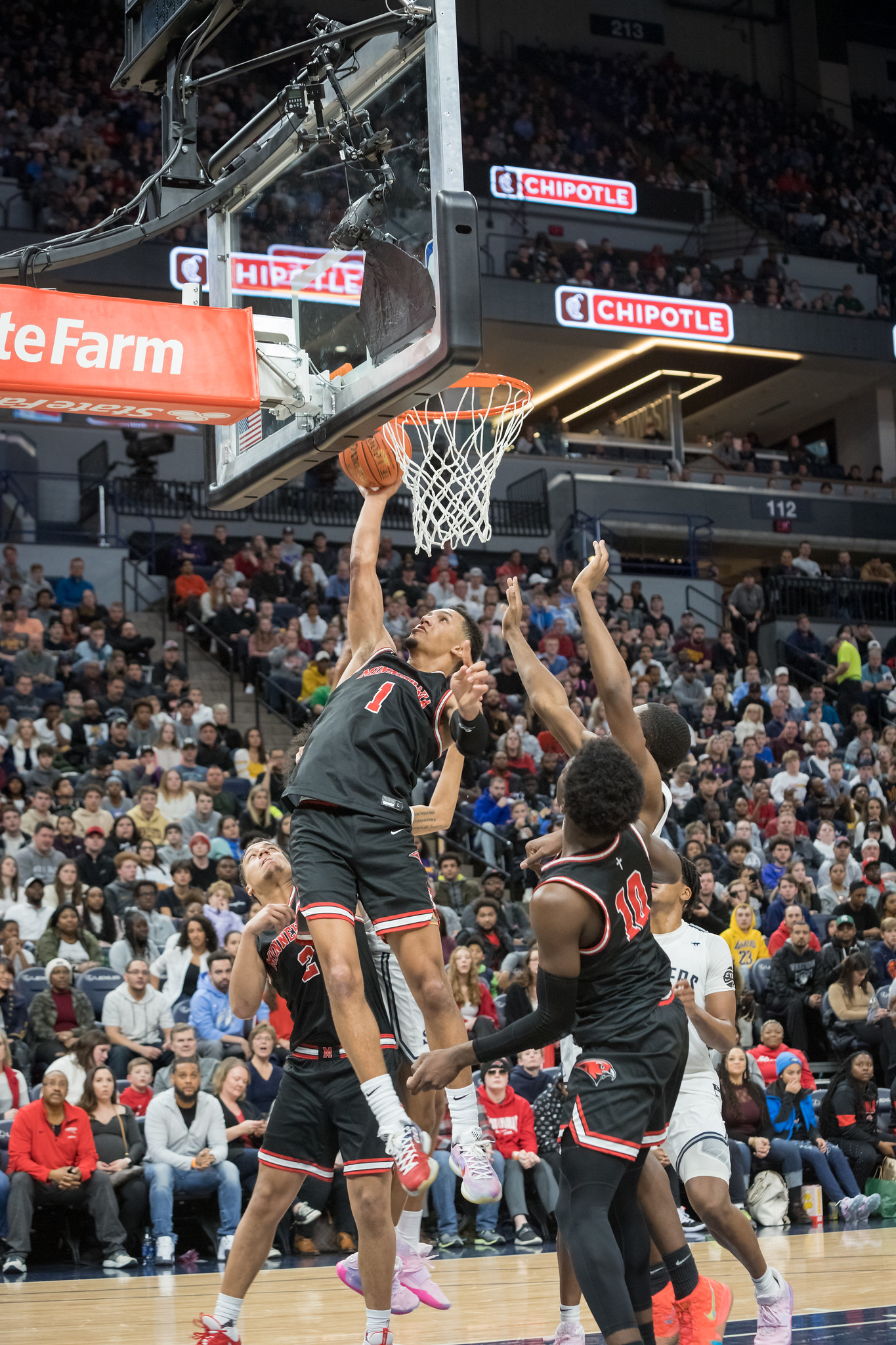 Jalen Suggs goes up for a shot in Minnehaha’s victory over Sierra Canyon. Photo courtesy of Minnehaha Academy

The Minnehaha Academy boys high school basketball team is now ranked No. 15 in the country after a dominating 78-58 win last Saturday over Sierra Canyon, a California team that includes Bronny James and Zaire Wade, the sons of NBA legends LeBron James and Dwayne Wade.

Minnehaha, located in Minneapolis, is owned by the Northwest Conference of the ECC.

The Redhawks (8-2) upset the Trailblazers of Chatsworth, California, before a near-capacity crowd of 17,378 at the Target Center, where the Minnesota Timberwolves play their NBA games. Another 17,000 fans watched the ESPN Clash of Champions on ESPN 3, according to the network.

The Redhawks were unranked by MaxPreps going into the contest against the Trailblazers, who were No. 8 and dropped to No. 17 after the loss.

The game was part of a two-day ESPN event. On Friday night, Minnehaha defeated Park Center, top-tier team in the state out of Brooklyn Park, Minnesota, while Sierra Canyon outdueled then No. 12 the Patrick School, out of Hillside, New Jersey.

Although the Redhawks had won the last three state 2A titles and are ranked atop the 3A class to which they moved, they were unranked nationally going into Saturday’s game.

They are led by several of the top-rated high school players in the country. Senior Jalen Suggs is rated as the sixth-best senior by ESPN and recently committed to Gonzaga. Seven-foot junior Chet Holmgren is considered the No. 1 center and fourth overall for the class of 2021.

Holmgren became something of a celebrity last year when he dunked on Steph Curry, after using the latter’s signature crossover move at the superstar’s SC30 basketball camp. A video of the play went viral and was viewed more than 1.7 million times. More than 50,000 people watched it on Holmgren’s Instagram, which gained him numerous new followers, including Dwayne Wade.

The Redhawks started off their season with two losses, in part perhaps because they basked too much in the press reports touting them as the best high school team in the state’s history, said coach Lance Johnson. “The losses quickly humbled them.”

The struggles also were due in part to injuries and the lack of practice. They only had three days together as a team before the season started because several of the players are on the school’s football team, which lost a nail-biter in the state championship finals and could not play basketball until after the tournament. Suggs is the team’s quarterback. 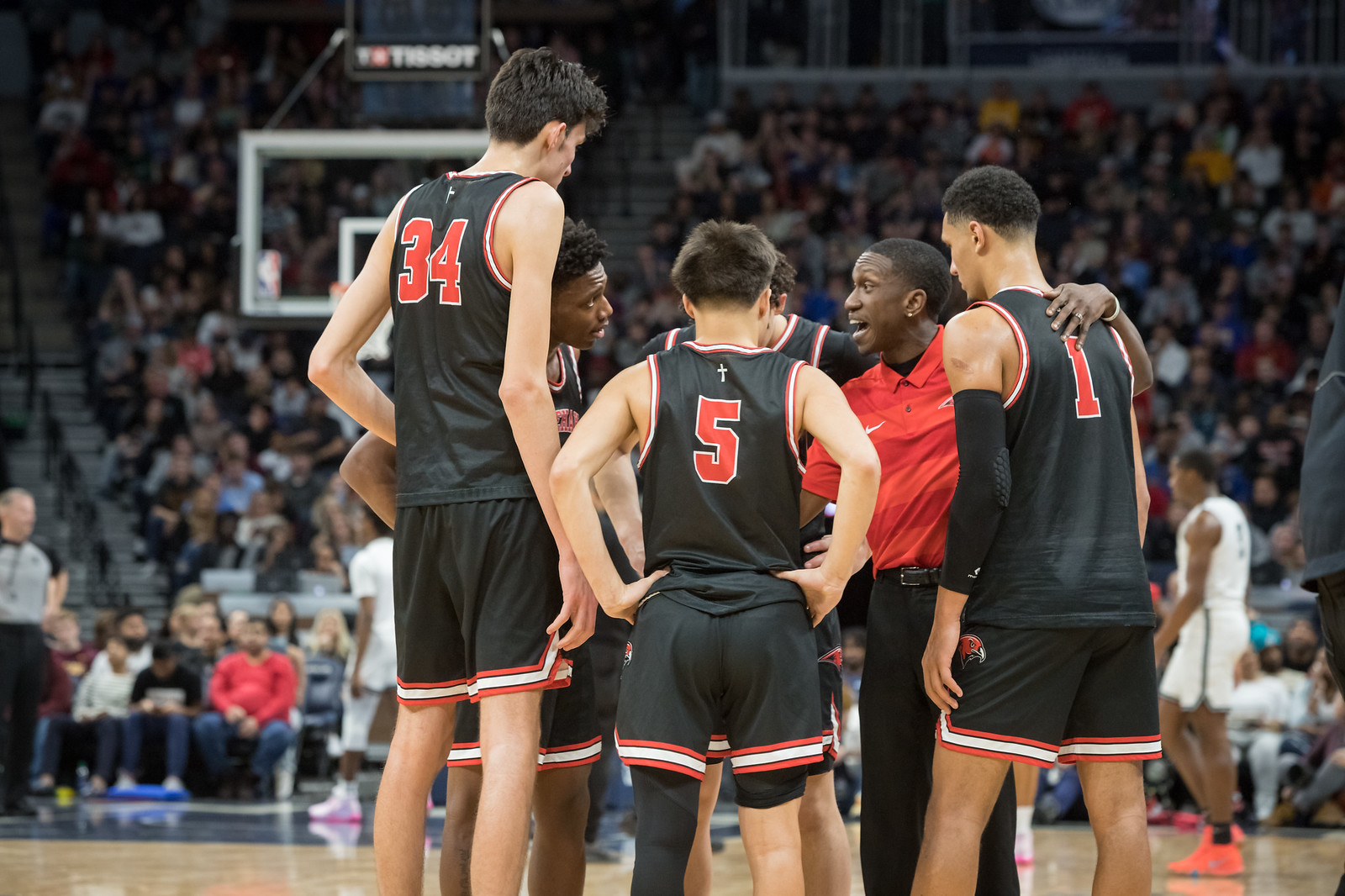 The Redhawks discuss strategy during a break in the action in front of more than 17,000 people at the Target Center. Photo courtesy of Minnehaha Academy.

It took several games before the team chemistry gelled, and the victory over the Trailblazers came as a result of working together, Johnson said. “The team I saw Saturday night was a completely different team than the one I saw four weeks ago.”

The team wears practice jerseys emblazoned with the word “Family,” which describes how the team members feel about each other and the school, says Sara Jacobson, Minnehaha’s executive director of institutional development. Suggs told media he chose to attend Gonzaga because its sense of family on the team and at the school reminded him of Minnehaha.

Paragon Marketing Group approached Minnehaha last year on behalf of ESPN about the possibility of hosting the two-day event. Minnehaha had upset a nationally ranked team several years ago in a game broadcast by the sports network.

Many Trailblazers games are being broadcast by the network because of James and Wade, said Jacobson.

Tickets for the Trailblazers Friday night game in Minnehaha’s 2,000-seat gymnasium sold out in one minute, Jacobson said.

She and Johnson said they were stunned that more than 17,000 people paid to see the game at the Target Center. Jacobson said they didn’t learn until December 11 that they would have to move the game to the larger venue.

“We really had to scramble, but the Target Center and the Timberwolves were great,” Jacobson said.