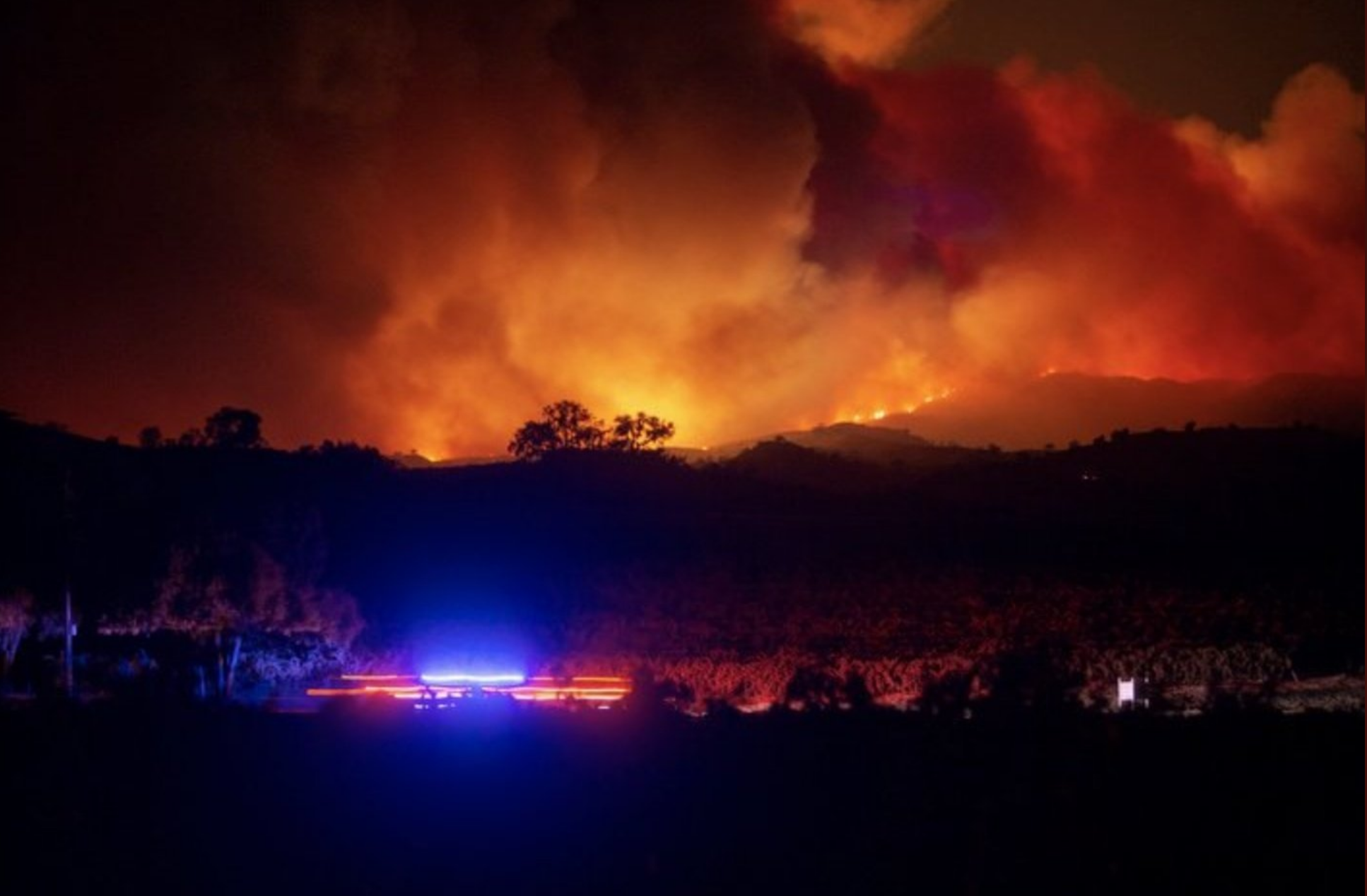 (October 28, 2019) – Several Covenant churches are providing shelter to evacuees from the Kincade Fire in northern California. Threats from fire or power outages meant other churches had to cancel services this weekend.

Evacuation orders forced Iglesia Cristiana to cancel services, but they were permitted to reopen as a shelter Sunday afternoon. 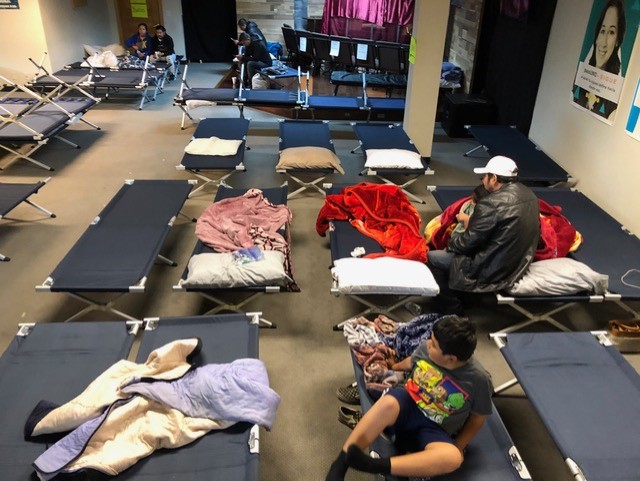 Iglesia Cristiana Shalom Elohim has opened its doors to serve as a temporary shelter.

Lilian Perez of Iglesia Cristiana said, “We are providing hot meals for breakfast, lunch, and dinner. We are giving gas cards and small gift cards, hygiene items, blankets, towels, etc. We have 45 volunteers working around the clock.”

She added, “We had a firefighter come to our church/shelter to post a map of where the fire is currently and to give us an update. Before he left he asked if we could pray for him.”

Bayside Santa Rosa Church canceled services Sunday morning because many members had been ordered to evacuate. “We didn’t want anyone coming to church who should be evacuating,” said Dan Ferguson, one of the church’s pastors.

The church is located just outside the mandatory evacuation zone. About ten people sheltered at the church Saturday night.

The Kincade Fire has grown to more than 66,000 acres and was only 5 percent contained, Cal Fire said this morning. 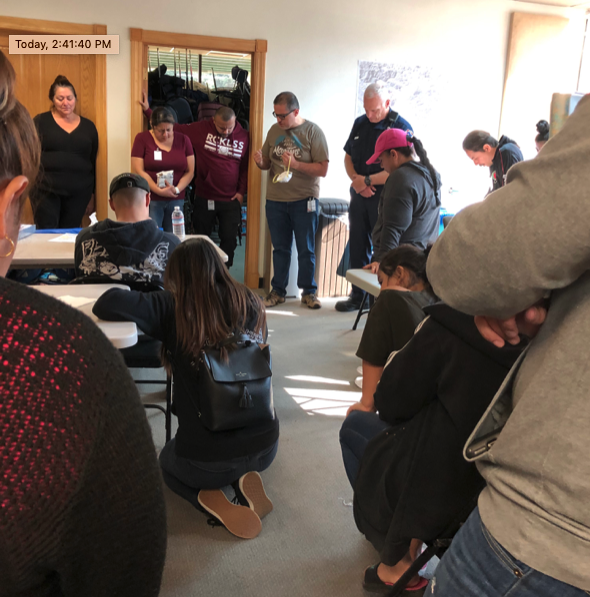 Members of Iglesia Cristiana Shalom Elohim pray with a firefighter.

The fire is impacting some church members who lost their homes in the Tubbs Fire in October 2017, Ferguson said. Several families had only recently moved into their rebuilt homes, and others planned to return this week.

“Our PTSD from the Tubbs fire gave us an extra measure of caution,” Pastor Scott Peterson wrote in an email to the congregation on Sunday. The order to evacuate came early Saturday morning.

The church’s Fall Fun Fest was scheduled for Saturday, an event that typically draws several thousand people. In 2017, the church hosted the event in November, one month after the Tubbs Fire. Six thousand people attended in what became a time of joy amid sorrow and pain, church leaders said at the time. They had to cancel Saturday’s event.

“I thought about the large mass of kids and adults we were going to disappoint,” Peterson said. “But we know what fire can do and how quickly it can destroy. This time we had warning.”

The fire has been pushed by winds that have reached up to 96 miles per hour. “I’ve never seen anything like it—these have been hurricane winds,” said Juana Nesta, who evacuated her home in Oakley at 5 a.m. Sunday.

Due to the winds, Pacific Gas and Electric cut power to more than two million people. “Winds of this magnitude pose a higher risk of damage and sparks on the electric system and rapid wildfire spread,” the company said in a statement. “The fire risk is even higher because vegetation on the ground has been dried out by recent wind events.” 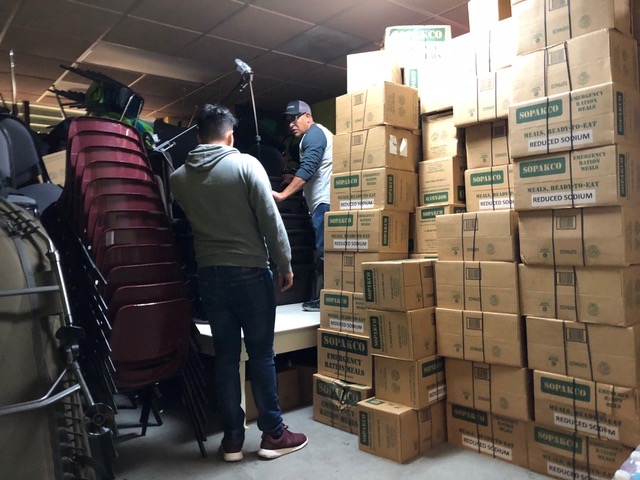 Food and other supplies are delivered to Iglesia Cristiana Shalom Elohim

In a court filing Monday, PG&E said its power lines may have started two smaller wildfires in Northern California over the weekend. It already had admitted that its power lines had sparked several other fires in the state.

The blackout could remain in effect for several days in some parts of the state, the company said.

The outage forced Mission Springs Camp and Conference Center to cancel a science camp of more than 200 children for the week because the 4,000-gallon septic tank would not work without electricity, said executive director Chuck Wysong.

Backup generators kept power on Saturday night at Old Oak Ranch Conference Center in Sonora, where the Pacific Southwest Conference Hispanic men’s retreat was being held. The event normally attracts 300 men, but fires throughout the state prevented as many as 100 from traveling to attend.