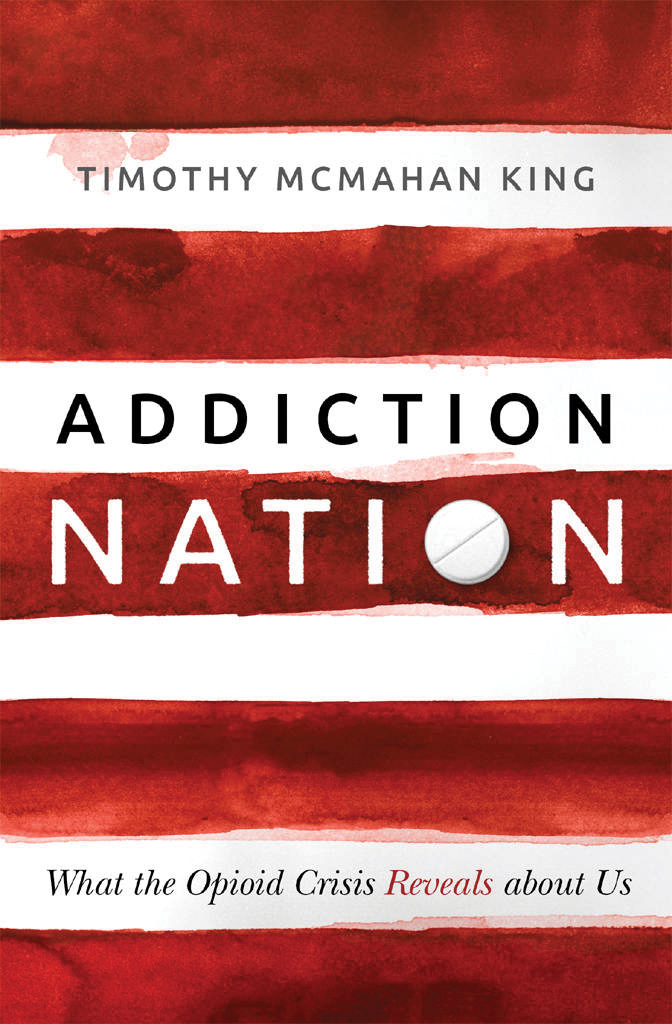 Addiction Nation is a great resource for anyone impacted by addiction and an important read for people concerned about the opioid crisis in our culture. It is for anyone seeking a restorative approach to helping people who suffer from addiction. It is for pastors, politicians, therapists, high-school teachers, youth leaders, coaches, school administrators, concerned parents, and loving friends. This book is for anyone longing to find solutions to the crisis and for those who hope to avoid contributing to the shame and stigmatization that keep us from moving forward. The opioid crisis in America is real.

This book offers an in-depth exploration of addiction. It is personal, political, and prophetic. Timothy McMahan King depicts addiction as a human problem, not just a moral one.

King shares his own struggle with addiction that began with his use of prescription pain medications after a medical procedure. Paradoxically, those medications both saved his life and threatened it. He reveals that identifying addiction as a disease allowed him to let down his guard and receive the help he desperately needed.

All human beings fall somewhere on a spectrum of addiction, King writes, suggesting that self-deception and denial get us nowhere. He describes addiction as more than a personal problem individuals face. Rather, he suggests, it is a societal problem steeped in the chaotic social, economic, and political systems of our culture. King draws a very clear line between addiction and consumerism, exposing predatory practices of pharmaceutical companies and unethical doctors. This book offers historical and sociological insights about the distribution of opioids, cocaine, crack, alcohol, and other drugs, and points to the imbalance between punitive and healing approaches based on social issues such as race, gender, and socioeconomic class.

“The greatest mistake we can make is to believe addiction is out there and not our problem,” King writes. In a profound way, he says, “Addiction Nation is my story. But it is our story too.” This book treats the subject of addiction with the respect it deserves without oversimplifying it. “Addiction is a dragon that is overcome not through battle but through a kind of taming and redirection,” King writes. He continues, “Ultimately, the concept of willpower in recovery fails because it treats the automatic self as an enemy to be conquered. The conscious self becomes the knight in shining armor, wielding willpower as a weapon to slay the dragon of addiction. Addiction is hard to overcome because it does not reside primarily in the conscious self.” He suggests that shame not only keeps addicts silent and in denial, it also silences community leaders who are best positioned to help people struggling with addiction.

Too often people want to know whose fault it is or who is to blame. Like the disciples with the blind man, they ask, “Who sinned, this person or their parents, that they are addicted?” This book advocates for a restorative approach that focuses on “healing, not consequences.” King argues that it does not matter whether an addiction starts with prescription drugs or out on the streets: “Blame and accusation only lead to silence and shame.” Recovery, he suggests, begins with healing. King points out that the so-called “war on drugs” has primarily led to an unjust and unimaginable increase in incarceration rates in our nation.

Throughout Addiction Nation, King reflects on his own recovery and the many available treatment options and resources. He hits a crescendo when he reveals a very important question that his doctor asks him—a question that changed his life. It truly was the turning point in his recovery.

As a pastor, I gained great insight from this book about the role of empathy in working with addicts, the need for needle exchange programs, and the use of medicine to make recovery from opioids possible for some people.

In the end, this book points to hope, prayer, community, imagination, meditation, faith, love, grace, and the power of the resurrection as our ultimate resources. Recovery is a miracle, and King lifts up awe-filled imagination as an antidote to addiction. Near the end of the book, he writes, “Recovery is not ultimately about the things we don’t do, or the substances we don’t take, or the people we stay away from. Rather, recovery comes in the positive commitments we make that can replace the addiction.”

Doug Bixby is the senior pastor of the Evangelical Covenant Church in Attleboro, Massachusetts. He recently got a new puppy named Toby.