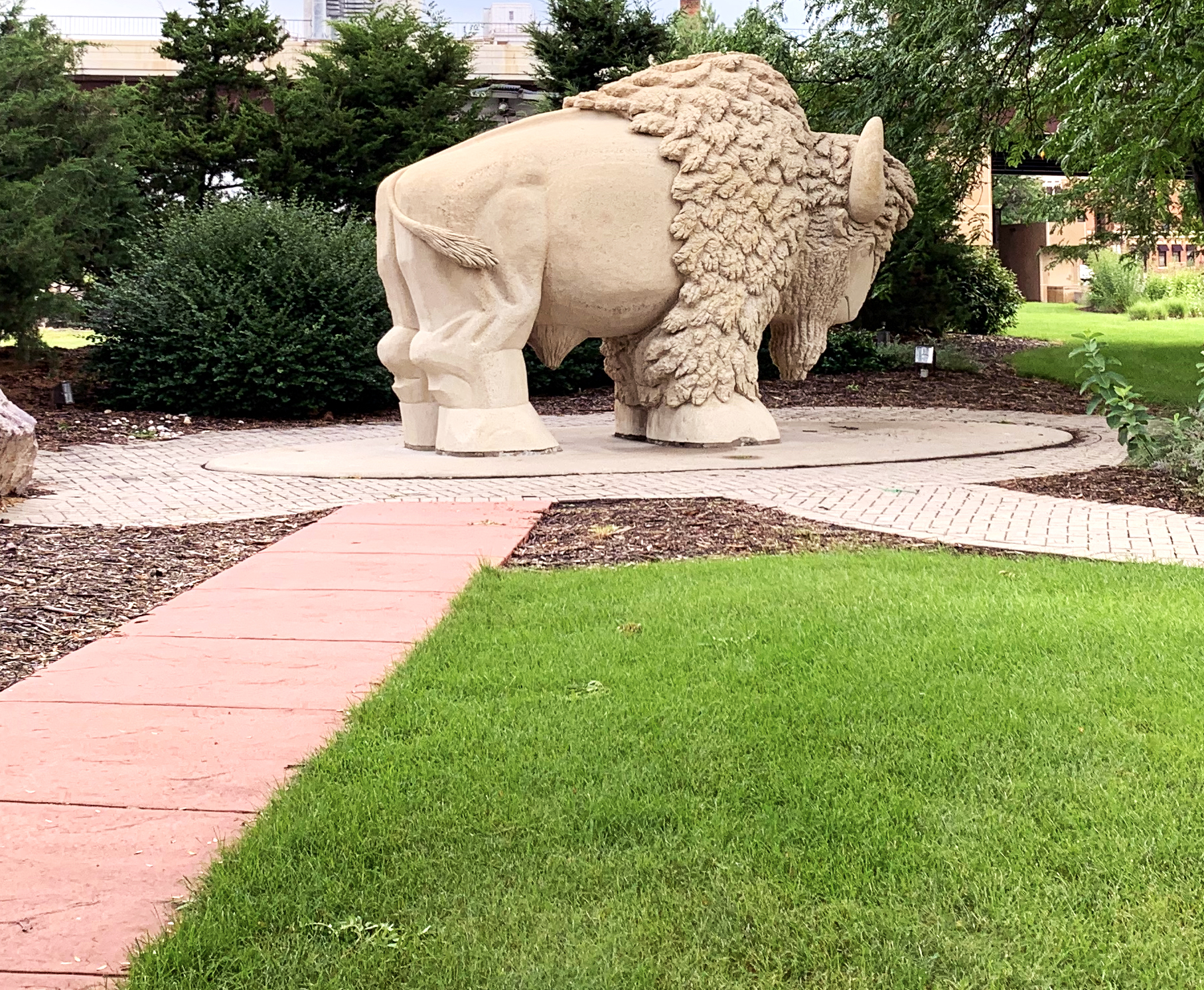 The southern Minnesota city of Mankato looks so tranquil on a summer Thursday, a contrast to the violence that once ruptured its riverfront. A hundred feet from the Minnesota River, a stone bison stands on a slab of circular concrete, peering out onto North Riverfront Drive. Just north of the bison, an overpass rises over the site where gallows once stood.

In 1862, on the day after Christmas, the U.S. Army hung 38 men from the Dakota tribe on those gallows. Four thousand people showed up to watch.

Authorized by President Abraham Lincoln during the U.S.-Dakota War of 1862, it was the largest mass hanging in American history.

After the execution, about 1,700 Dakota people were forced from their lands and marched north 150 miles to Fort Snelling. As many as 300 died on the journey and in the ensuing winter at Fort Snelling. A story on National Public Radio records one account of a woman snatching a baby from the arms of a Dakota mother and dashing the infant against the ground, killing the child. Hundreds more did not survive the winter months at the fort before their forced relocation to South Dakota in the spring.

This Thursday morning in July, Megan Heutmaker walked with our group of 11 Covenant women near the spot where her Dakota ancestors died.

Nearby, the bison stares out. Poems titled “Reconcile” and “Dakota Prayer” have been decaled onto a towering fiberglass scroll. 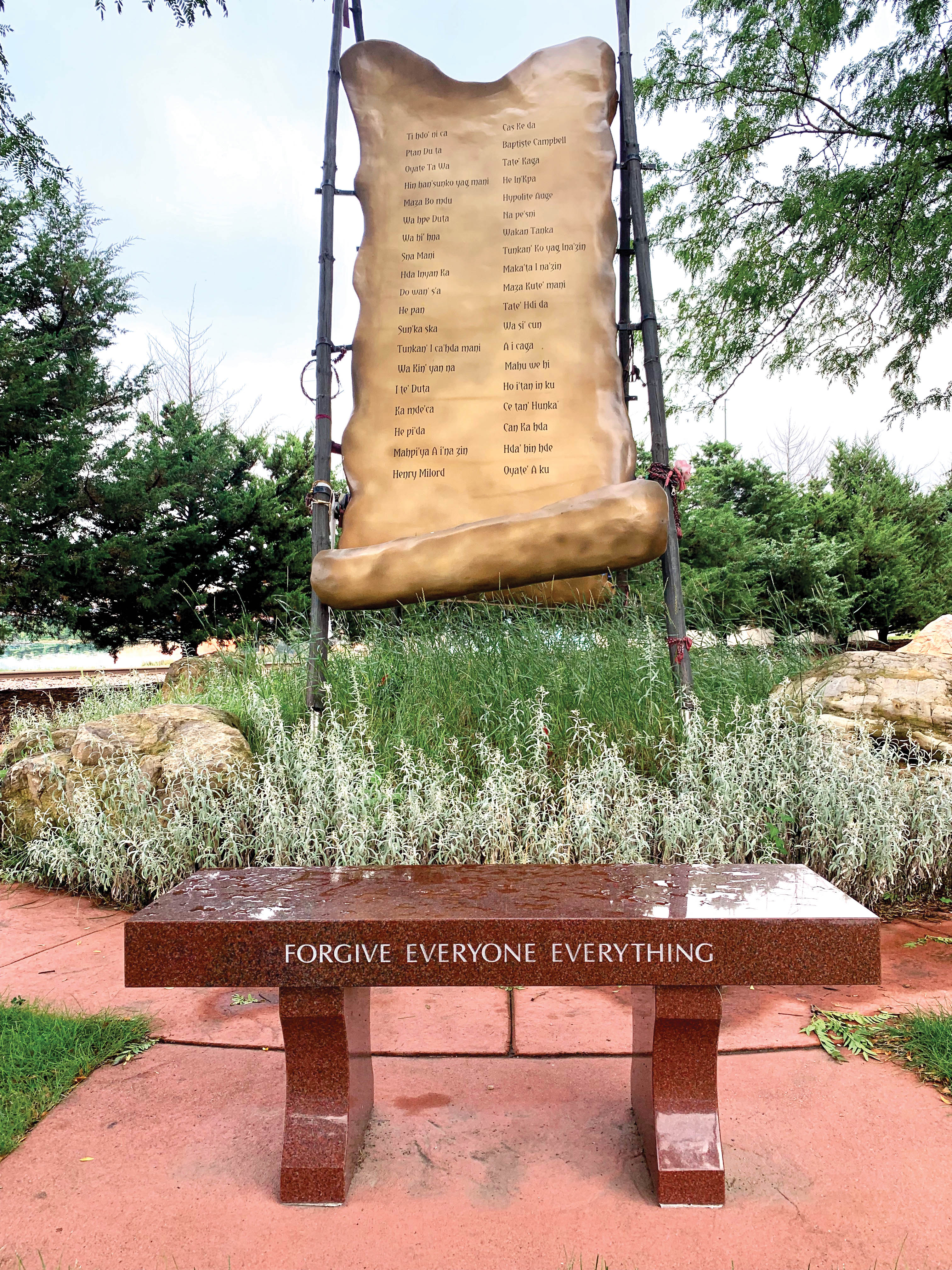 On the other side of the scroll, 38 names are etched: Hda Inyan Ka, He pan, Henry Milford, Ho I’tan in ku. Below, etched in capital letters on two benches, are the words “Forgive everyone everything.”

I stare, my eyes flitting over each letter, fixated.

Three days before our group gathered for this mini-Journey to Mosaic, a 24-hour whirlwind in justice and reconciliation led by the ECC’s Love Mercy Do Justice (LMDJ) mission priority, the week had begun for me in fury.

The national conversation vibrated around a presidential demand that four women of color, all United States citizens and elected lawmakers, should “go back” to their own countries. As an Asian American female, I grew up hearing intimations and insistence that I “go back to my own country.” Time after time, when I tell people I was born in a Chicago suburb, I’m asked where I’m really from. Once, as I walked down the sidewalk, a man yelled to me, “Hey, China doll!” Another day, a woman strolled up to me and demanded to know my ethnicity—she did not ask my name. I explained once again that my parents immigrated from Hong Kong in the late 1960s and then met, married, and had me in Chicago. The woman answered with what she thought was a compliment: “Well, for not being a native speaker, your English is really good.”

It is exasperating. And ignorant. And racist.

These experiences perpetuate a sense of foreignness, of feeling like I do not belong in my own country.

When such language was legitimized by the person occupying the highest office in the land, this demeaning of what it means to see each other as created in the imago Dei, it tore at me on a visceral level. I struggled to channel my feelings in constructive ways. I named my pain and let others see it in its rawness.

Our nation has a sordid history of trying to confine people to certain spaces: Native Americans to reservations and then a forced relocation to cities; Japanese Americans to internment camps during World War II; African Americans enslaved in homes and plantations and then sidelined to degenerating neighborhoods through redlining; Chinese immigrants to Angel Island or away from America all together via the Chinese Exclusion Act; Mexicans and Mexican-Americans forced over the southern border during the Great Depression in an effort to salvage jobs for white people; and now, undocumented migrants, often fleeing unfathomable violence, cordoned off into detention centers.

The 11 of us women—Latina, Asian American, white, and black—came together as somewhat of an antidote to historical ugliness. We arrived 24 hours before the start of the I Am Conference 2019, the ECC’s triennial conference for women, out of personal passion, frustration, confusion, openness, or simply a cocktail of all these emotions. Our leaders, Cheryl Lynn Cain and Nilwona Nowlin, greeted and accepted us without judgment. 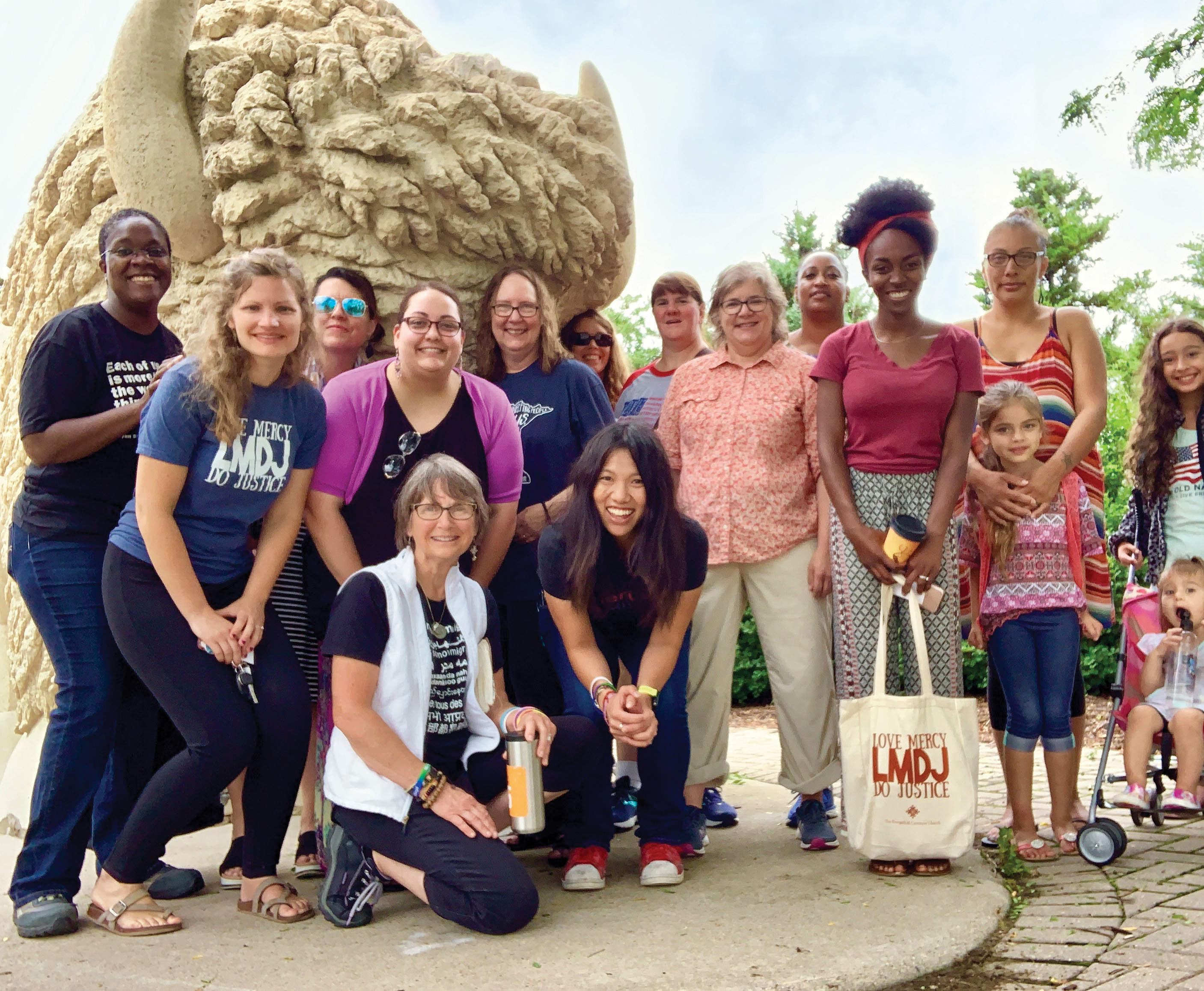 The beauty in the mini-Journey to Mosaic is its hyper-geographic study of how communities of color have been historically oppressed in coordinated ways. LMDJ has hosted Journey to Mosaic immersion experiences in places such as Chicago, Seattle, California, Colorado, and now in Minnesota. No region of America has been spared from an ugly narrative of racial difference. The tapestry that makes America so beautiful has also crushed innumerable hearts.

During the journey, we first listened to each other dialogue about our experiences with race. As Cheryl Lynn shuttled us around in a rented van, we heard more about the Dakota 38. We listened to stories from MeganHeutmaker and Megan Schneitker, Dakota and Lakota. We listened in St. Paul as Cheu and Tseng Vang shared their history of fleeing from Laos after the Vietnam War.

In Minneapolis, we sat in the district offices of Representative Ilhan Omar as Ali Isse, the congresswoman’s deputy district director, shared his own experience as a refugee from Somalia in the 1990s, spending time at a camp in Kenya, as Congresswoman Omar did. Even more than national policy, Ali said, he is most concerned with caring for the refugees already in their community.

We listened to Hazel Sloan as she shared what it was like to be one of the first African American female pastors credentialed by the Covenant. Decades ago, she said, some people at churches in smaller communities hesitated before shaking her hand. One man insisted she and her husband were Native American and not African American because “you’re not black, you’re brown.” She heard one man at an Annual Meeting say the increasing diversity of the Covenant would “diminish its Swedish background.” And yet, Pastor Hazel stayed, becoming integral to the fabric of the larger Covenant and the multicultural space that is Community Covenant Church in North Minneapolis. 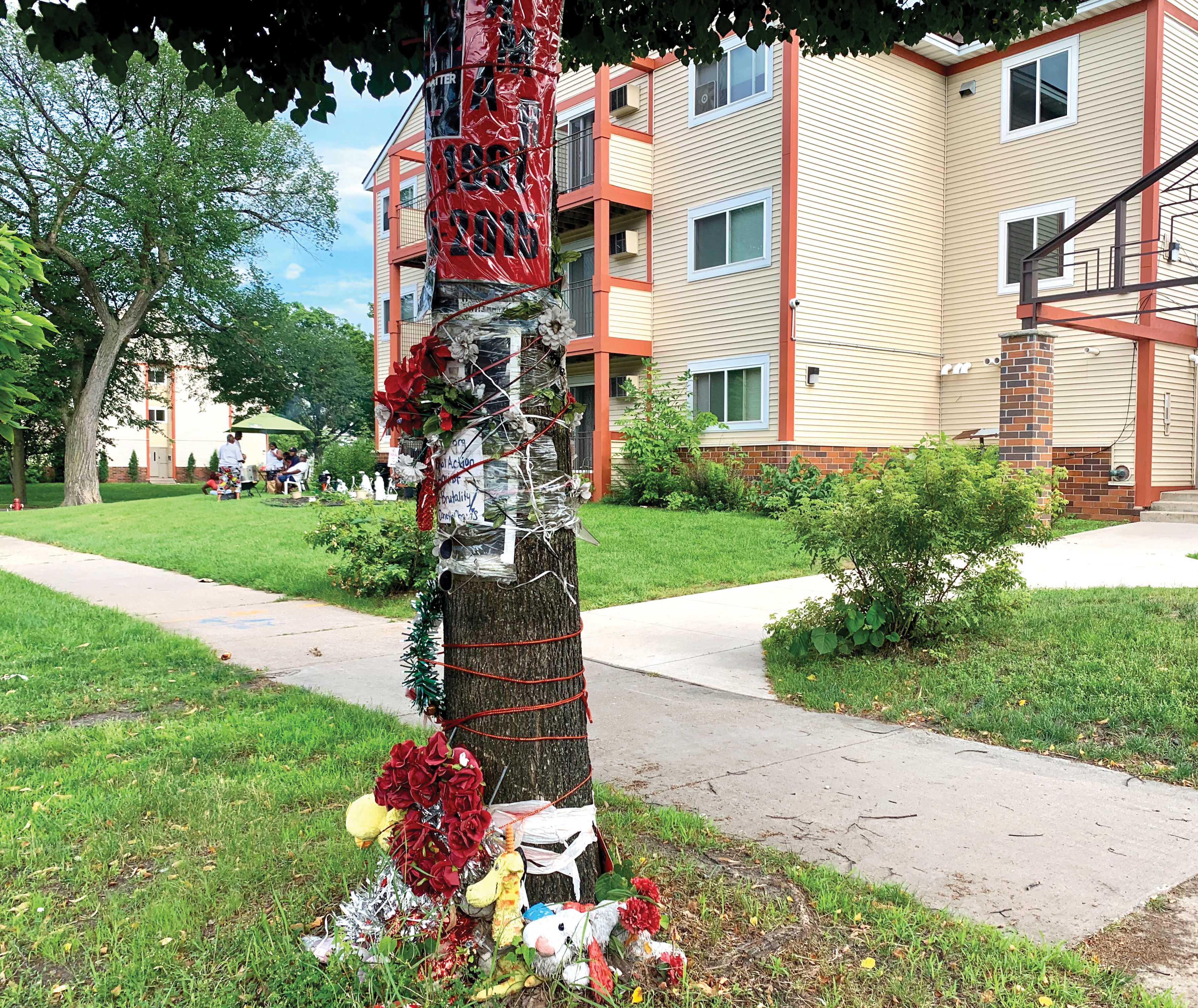 We ended our time together on Plymouth Avenue two blocks away. Community Covenant’s pastor Luke Swanson told us about a young man named Jamar Clark. Four years ago, Clark was at a party when he tried to go into an ambulance to check on an injured friend. He ended up face down on the ground, allegedly handcuffed by police, killed by a bullet fired by one of the officers. The community protested for more than two weeks. The tree marking the spot where Clark died carries artificial rose petals and a stuffed giraffe. Across the street and bound to the tree, a boyhood photo of a smiling Clark stares at passersby, with the words “I matter” (photo above).

Two evenings later, Ramelia Williams, director of ministry initiatives for LMDJ, preached to the 750 women at I Am, bringing up the names of other young black men killed in controversial ways, pointing out some people didn’t think they belonged. But then, she concluded, “Whatever is going on in my life, I belong to God.”

One hundred and fifty-two years after their ancestors were hung en masse in the town where they now live, Megan Heutmaker, Megan Schneitker, and other Native Americans have coordinated with local businesses, educators, and a largely white city government to celebrate Indigenous People’s Day, to hold an annual remembrance of the Dakota 38 and to offer Ojibwe and Dakota language programs at Minnesota State University. A century and a half after the Dakota people were kicked out of their homelands, their descendants participated in a symbolic walk from North Dakota to Minnesota. As they crossed the state line, people held signs reading, “Welcome home.” 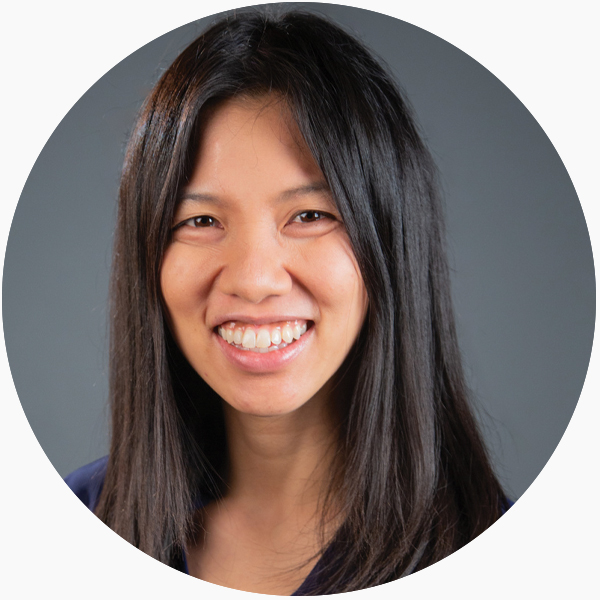 Erin Chan Ding is the executive director of Covenant Communications.