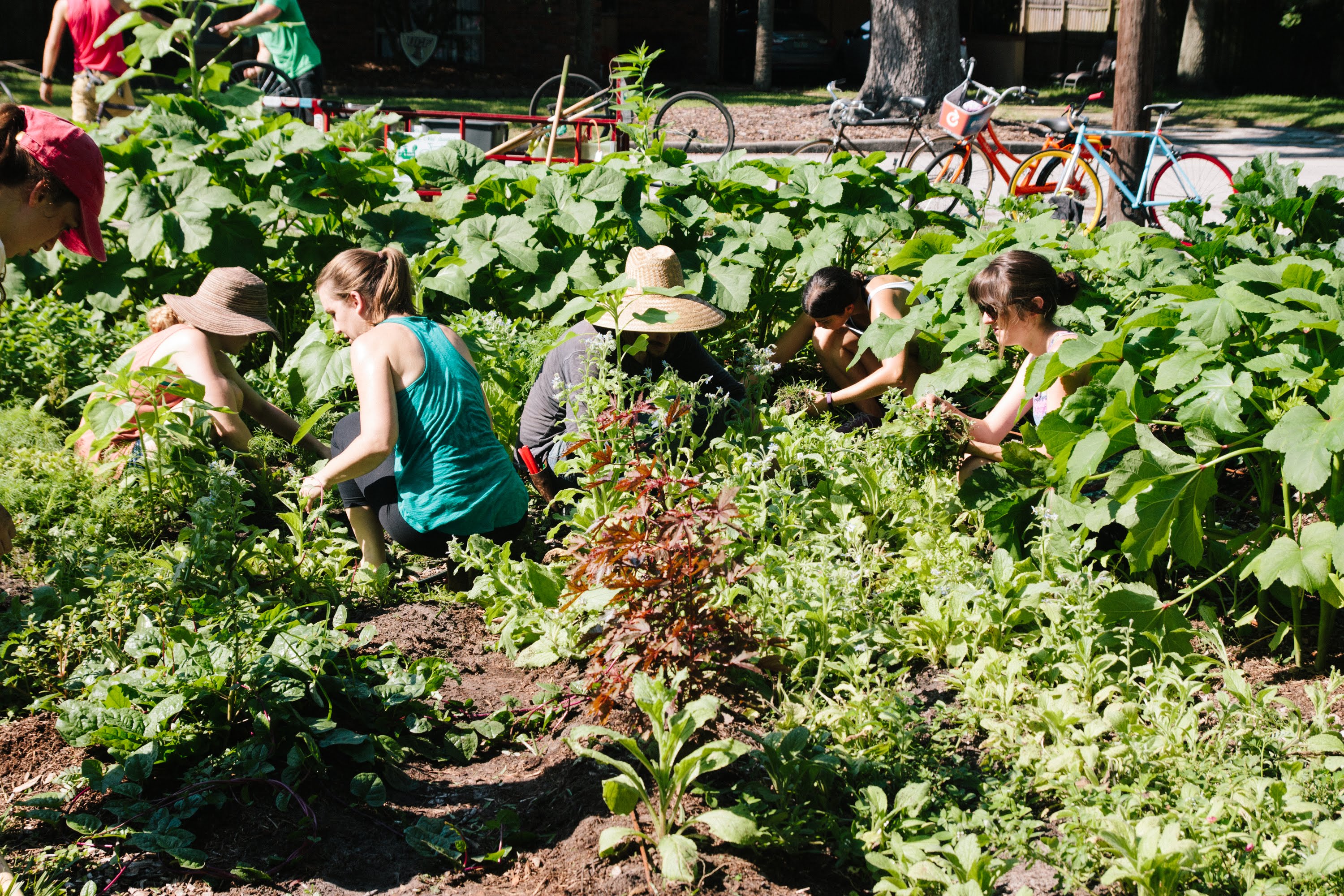 A swarm of bicycles wind their way through the Florida neighborhood surrounding Audubon Covenant Church, toting an assortment of gardening tools. The cyclists are volunteers with Fleet Farming, an urban agricultural program that transforms lawns into farms to increase local food accessibility. 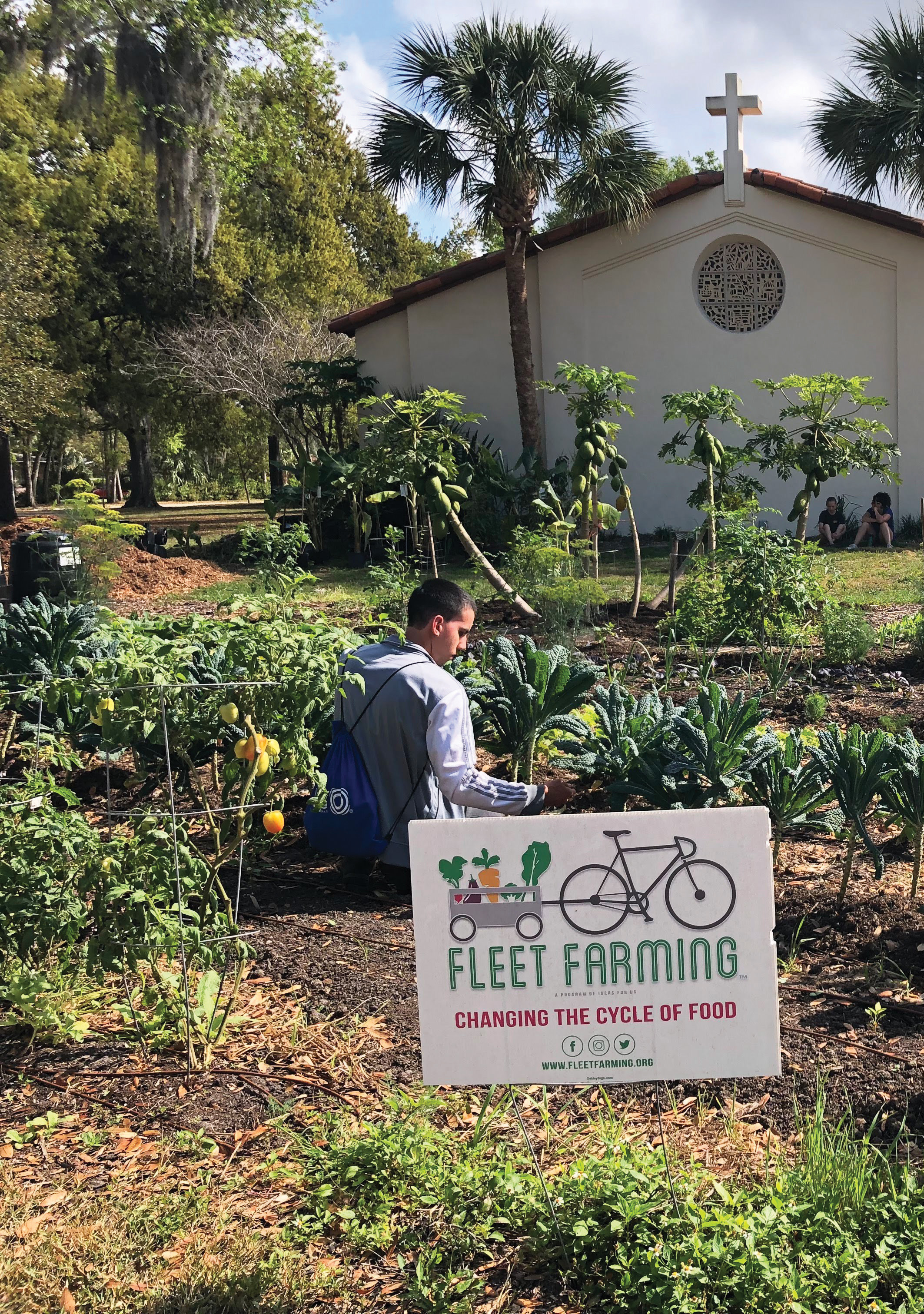 Audubon Covenant is partnering with the Orlando-based nonprofit to transform community members’ lawns into farmlettes, or garden plots, that are planted and maintained by the cycling volunteers. The garden in Audubon Covenant’s yard is the largest in the Fleet Farming program. An orchard of at least nine different types of fruit trees, including banana, pomegranate, and avocado, has been planted on the lawn as well, cared for through a partnership with Orlando Permaculture, who works to promote environmental change through educational programs. Both Orlando Permaculture and the nonprofit that launched Fleet Farming, IDEAS for Us, maintain offices at the church.

The average American meal travels around 1,500 miles from farm to table. And 40 million acres of lawns across the U.S. consume between 30 and 60 percent of fresh water in cities, according to IDEAS for Us. Fleet Farming has prevented more than 10,000 pounds of CO2 from being emitted into the atmosphere, and the increased local food accessibility has reduced the carbon output of food transportation.

Located amid a community of bungalows and mid-century modern homes, Audubon Covenant was the first building constructed in the neighborhood in 1954. Many residents have lived there for decades and are invested in each other’s lives. “I think their open-mindedness allowed them to become a kind of testing ground for new initiatives,” says Sarah Robinson, pastor of Audubon Covenant Church.

Robinson came to the church in 2013, around the same time the East End Market set up shop in the neighborhood, focusing on local, sustainable produce and creating a big garden out in front. Other local sustainability initiatives were in the works. A graduate student was working on a project to make Audubon Park an ecodistrict, where communities address sustainability by linking energy, transportation, water, and land use in an integrated system. The church has also installed a bike rack to encourage cycling to worship and replaced single-use plastics in favor of actual dishes that can be washed in their new dishwasher. 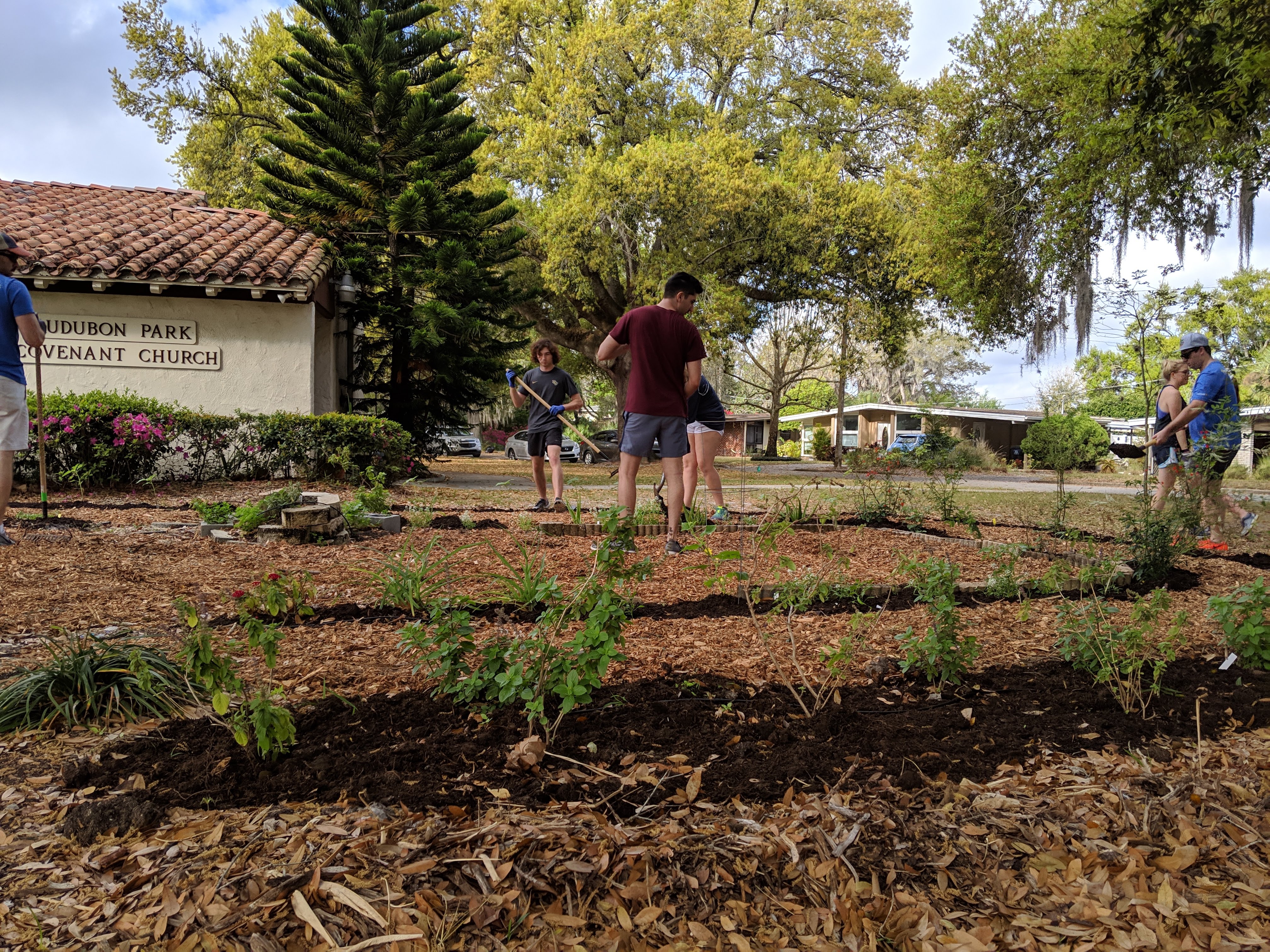 In her last year of seminary, Robinson sensed God calling her to serve at a church that needed revitalization through a holistic connection with its community. So when Audubon Covenant called her as their pastor she was excited to see that God had brought her to a place that needed the kind of revitalization she felt called to.

Some Christians discount the need for creation care, Robinson acknowledges, because, they contend, we are called to focus on the kingdom to come, not the earth we live in today. In response, she points to the depiction of a renewed heaven and earth in Revelation 21:1–22:5. “These verses speak of the new Jerusalem coming down from heaven to earth,” she says, “and God coming to dwell with God’s people in a heavenly state where there is no more pain or crying or death, where it is described as a garden in the city with a river of life flowing through it.”

To describe her hopes for the church Robinson uses a gardening metaphor based on her years growing up near farms. She recalls “demonstration plots” usually found along the highway where farmers try out new fertilizer, experimental seed, or innovative agricultural practices. Their purpose is to demonstrate a better way so that others will want to try it. Audubon Covenant is seeking to be a demonstration plot of creation care ministry, Robinson says. “I think of churches as a place in which we live out the kingdom of God so people can have a vision of what that is meant to be—a vision of something better, of hope for something better.”

Making changes to better care for creation required a gradual culture shift for the Audubon. But, Robinson says, “the church was excited about trying things they hoped would engage the neighborhood more seriously.” 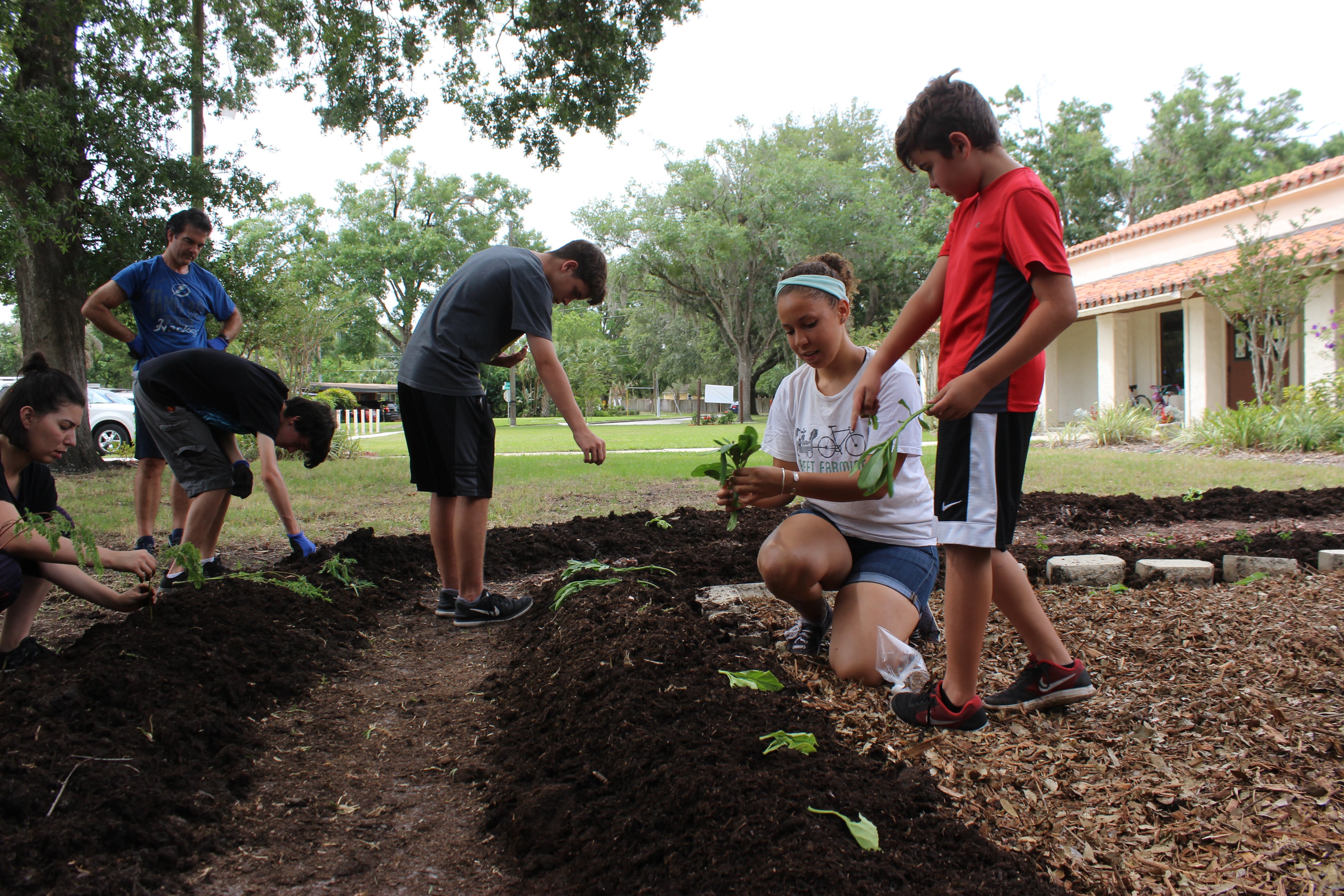 So when a group of graduate students from nearby Rollins College reached out to Robinson about the possibility of using church space to do bicycle-powered composting for Audubon Park residents, she brought the idea to the church leaders. As soon as she presented the concept, one older member of the council said, “Just how we used to do,” hearkening back to a previous era before plastics and a throwaway culture became normative.

For Robinson, Fleet Farming and composting are more than environmentally conscious practices. Creation care, she says, is another dimension of reconciliation, explaining that we are called to reconcile ourselves with God, one another, and oneself.

In 2014, the church began a focus on the Season of Creation. For one month each year, they study what the Bible says about creation, learn how to live within and care for it, and celebrate it.

“This is actually an integral part of our faith,” Robinson says. “This is honoring who God has made us to be and who God calls us to be—by living more faithfully and more sustainably.” 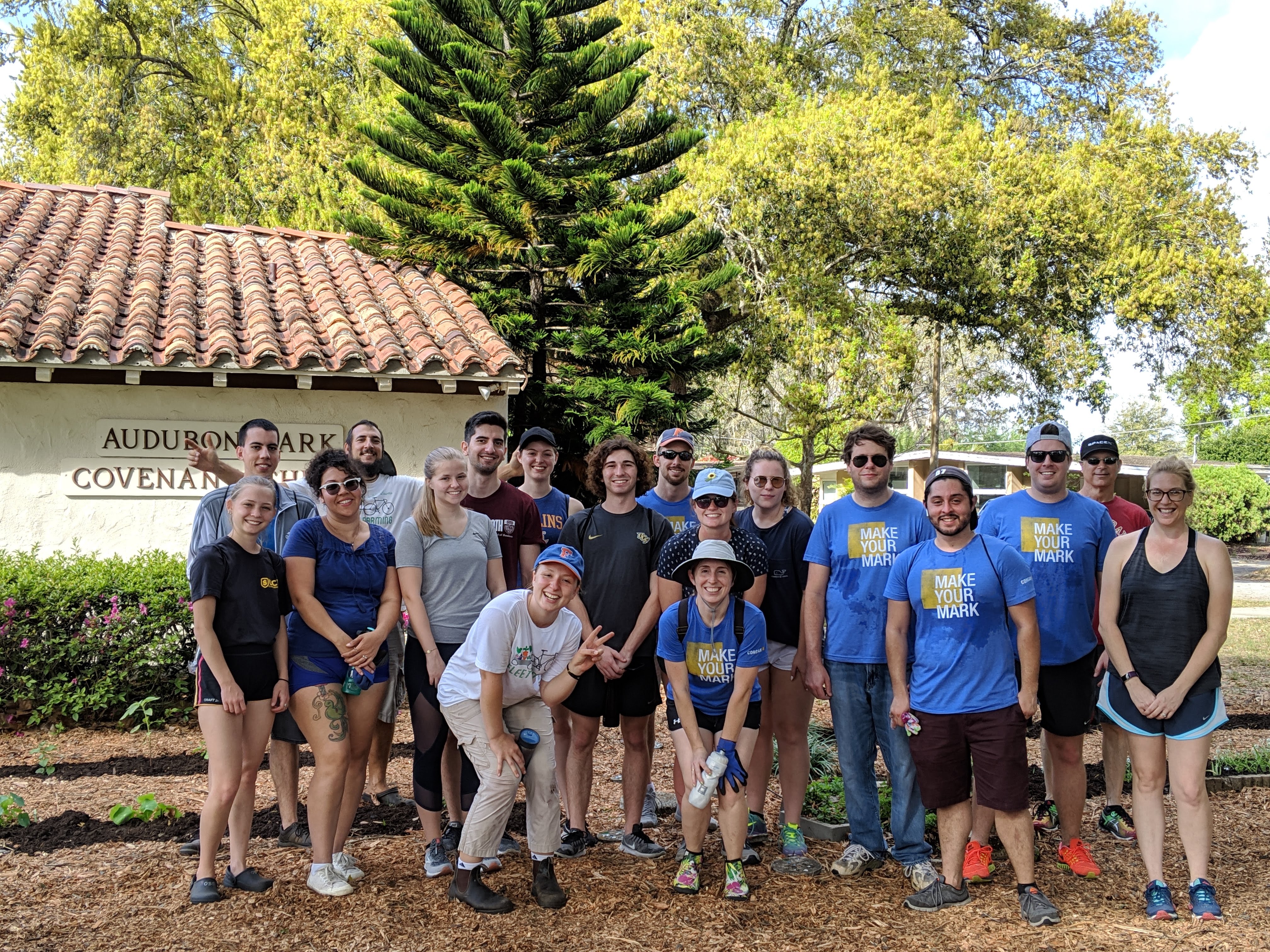 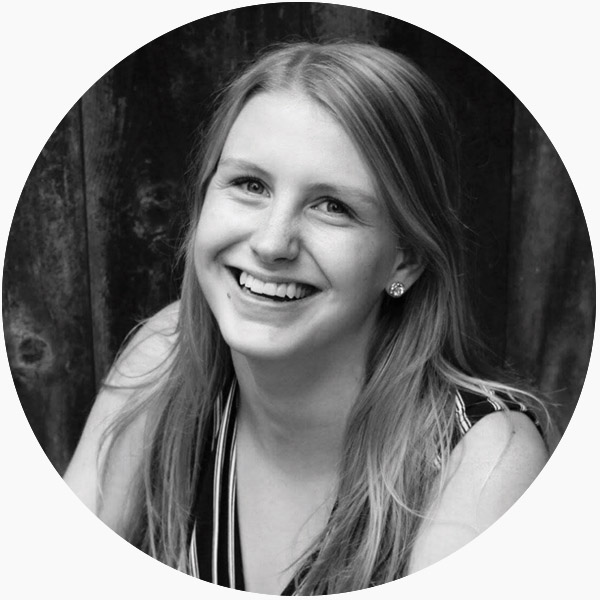 Jordan Cone is a senior at Augustana College in Rock Island, Illinois, where she is studying Multimedia Journalism & Mass Communications and Creative Writing. This fall she will be working as the managing editor of her college’s newspaper, the Augustana Observer, and will continue serving as a YoungLife leader.