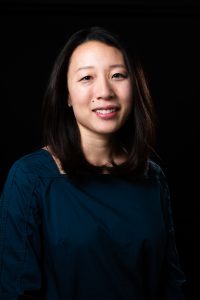 I was stunned to learn that as recently as the 20th century, some infant girls in Korea, particularly those born into poor families, were not given names by their parents—ever. These nameless girls were born unwanted in a society that valued men over women. They were seen as a financial burden to their families, with no economic future of their own. Their relationship to the men in their lives defined their entire existence—they were known as the daughters of their fathers, the wives of their husbands, the mothers of their sons. Meanwhile, many of these same families would pay fortune tellers to select auspicious names for their baby boys, believing their name would determine theircourse of life.

As a second-generation Korean American, I had been aware of the cultural preference for sons in Korea. I knew of my own family’s hope that I would be born a son, as the firstborn child of my father, who is my grandparents’ firstborn son. I had also become aware of the heart-wrenching tragedy of historic infanticide and abandonment of baby girls in Korea and elsewhere around the world, where cultural devaluing of women and the devastating effects of poverty sometimes converge into a state of hopelessness, leading families to destroy their infant girls.

Even with this context, the thought of a baby girl being deprived of a name of her own left me completely shaken. She would live and breathe but would have no individual identity. She would coexist with others while being reminded daily of her lack of value to her family and to society.

To the world, the Samaritan woman at the well has no name.
But Jesus knows her.

Learning about this reality of my ancestors’ homeland, as difficult as it was, allowed me to connect with greater depth to the Samaritan woman who encounters Jesus at the well in John 4. This woman, who is left nameless to us, represents the most marginalized of the marginalized. As a Samaritan, she is detested and seen as unclean by the Jews. As a woman, she is seen as legal property of men. We also learn she has lost five husbands, and that the man she is currently with is not her husband. This likely means she is living in a state of bondage, out of desperate need for survival. To the world, she has no name.

But Jesus knows her. Even before initiating a conversation with this woman, he is fully aware of her day-to-day reality, which is dictated by racism, ethnocentrism, and patriarchy. By choosing to speak with her, he confronts these systemic manifestations of evil in the world. Jesus resists the injustice of the law by addressing her in public. He is willing to be accused of being ceremonially unclean by drinking the water she gives him. Jesus breaks through the systems of sin that leave her nameless by sitting with her, entering her reality, and offering her the gift of life.

I mourn the rejection and dehumanization suffered by nameless baby girls, in Korea and elsewhere, in the past and present. I believe Jesus wept with them in their pain and powerlessness, as they grew into nameless teens and nameless women. I mourn the ways the same root sin of patriarchy also manifests in our country today, which coupled with the evil of white supremacy, renders many girls and women, particularly women of color, essentially nameless. In their namelessness, these women are seen as objects, resources, and quota-fillers.

Namelessness can quickly lead to exploitation, as it lessens the humanity of the other. Namelessness says, “I could have known your name, but it is not worth my energy and time, so I will see you as I want to see you, defined by my standards.” We are all at risk of seeing others this way. But when this posture is adopted by those in positions of power, people on the margins suffer—through microaggressions, lost opportunities, and even abuse.

Our names give each of us a sense of identity, sometimes even a sense of purpose. Jesus knows us so intimately, and calls each of us by name. Our names connect us with one another, in relationship, and in community. Loving our neighbor starts with knowing one another’s names and stories. In the eyes of Jesus, no one is left nameless.