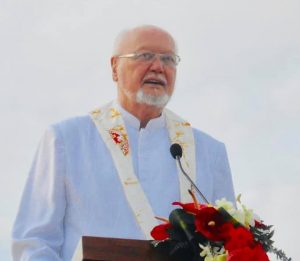 He was born on June 29, 1935, in Marquette, Nebraska. He earned an associate’s degree from North Park College, a bachelor of science degree in education from the University of Nebraska, and a master’s of divinity from North Park Theological Seminary.

The couple served churches in Kewanee, Illinois; Mercer Island, Washington; the International Church of Luzern, Switzerland; and Bali. He was named pastor emeritus of the Mercer Island congregation, where he served for 26 years. Under his leadership, the church grew from 55 attendees to more than 1,000.

Bud served on boards that included the executive committee of the Association of International Churches of Europe and the Middle East, the North Pacific Conference Executive Board, and the ECC Executive Board.

The Palmbergs had traveled to Bali, where Bud was serving as pastor of the Kuta International Christian Church for three months. The couple had served the church there twice before, the last time being in 2009.

In 2012, they were honored as “Heroes of the Homeless.” In 1967—his first year at Mercer Island—Bud launched Operation Nightwatch, which ministered to marginalized people in Seattle. The ministry expanded to several states and still continues.

An article published by a local media outlet on the Nightwatch’s twenty-fifth anniversary noted how taxing the work could be and that Bud was the only person who had continued in the ministry since its founding.

“I need to feel I’m doing something to help, but also to keep a balance in my life. I’ve got to be reminded continually that there are people with very raw, uncamouflaged, undisguised needs that are very basic,” he said. “They need somebody to buy them a hamburger and get them out of the rain. And they need somebody who will just put an arm around them and say, ‘You count.’”