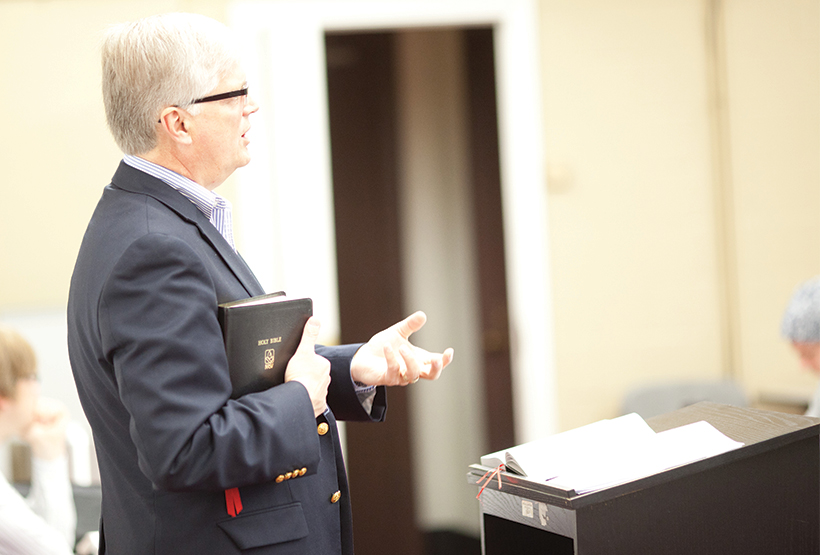 Lately I have been reading Michael Massing’s massive Fatal Discord, an account of the relationship between the sixteenth-century scholar Desiderius Erasmus and the reformer Martin Luther.

Erasmus was a typical academic: happiest when surrounded by his books. He longed for peace and quiet to get on with his studies. As Massing puts it, Erasmus just wanted to be left alone. But Erasmus was also deeply concerned about the state of the Catholic Church—the corruptions of Rome, the ignorance and profligacy of the priests, and the greed that fleeced ordinary people and tarnished the reputation of the church. He was a reformer—with a small “r.” Like many who remained faithful Catholics throughout the explosive sixteenth century, he understood the frustrations of the learned as well as the disappointments of ordinary Christians. But he wanted gradual reform—a refining fire, not a conflagration.

Luther was something else entirely. He too was a scholar, and he had great respect for Erasmus. When Luther began his German translation of the Bible, Erasmus’s Greek New Testament was at his elbow. Throughout his life Luther had been paralyzed by fear of the judgment of God. He had driven his confessors crazy dragging out every tiny sin he could imagine. His sessions in the confessional could last for hours. And then he discovered in Paul the liberating word of God’s grace. It was faith, not works, that saved; it was God’s work, not our works, that delivered. Luther, of course, shared Erasmus’s frustration with the corruption and profligacy of Rome. But unlike Erasmus he would eventually break with Rome. He would insist that the Bible, not the Roman curia, was the Christian’s authority for life. The hierarchy, he would thunder, was not entrusted with the singular privilege of reading and interpreting God’s word. Priests were not the only ones who could read and understand Scripture. In fact, the priesthood belonged to all believers, not just the select few who were ordained.

Erasmus was for moderation and caution, for moving ahead with reform, yes, but not getting out too far in front of the people. Luther was to Rome “a wild boar thrashing around in the vineyard” of the church. It was an apt metaphor. Luther set loose forces he could ultimately not control. Chaos, even violence, followed in the wake of his reforming zeal. For Erasmus, Luther had many of the right ideas, but the wrong methods. For Luther, Erasmus was a source of great inspiration, but far too cautious and timid.

It seems to me that both were right. As Massing writes, no one could do invective like Luther. The crudity and violence of his writing must be seen to be believed. And Erasmus, who had set much of this in motion with his work on the New Testament, was perhaps too enamored of his creature comforts to take the risks Luther did. Although Erasmus remained a faithful Catholic, more or less, his contribution to the Reformation was significant. He recalled Christians to the actual text of the Bible and gave them the ability to read it for themselves. Erasmus and Luther share the credit (or the blame) for the tens of thousands of Protestant denominations and sects today.

This is my last column for the Covenant Companion. I have been writing this particular column for nearly 25 years, and my first articles are from the early 1980s. How do you sum up nearly 40 years of thought? Sometimes, perhaps, I was like Erasmus, a bit too cautious and circumspect. Sometimes, surely, I was more like Luther, thrashing around like a boar—or a bore! But I see in these two men a tension I have tried to live with: the need to speak at times with humility and at times with daring. We need to recognize our profound ignorance before the mystery of God and yet proclaim confidently the good news of his love and grace in Jesus Christ. I have also wanted to empower rather than infantilize ordinary Christians (if there are any such!) to live into the teachings of Jesus, the theologizing of Paul, the pronouncements of the prophets—to pursue learning and understanding, to grasp our Reformation heritage. The Bible is ours to read. Surely, we are to be guided by the scholars and thinkers past and present. Surely, we are to study and reflect in community.

Erasmus and Luther freed the word of God for the people of God, and we should never take that for granted. We do, undoubtedly, make mistakes, but let us take seriously Luther’s advice to his young colleague Melanchthon: “Be a sinner, and sin boldly, but let your trust in Christ be stronger and rejoice in Christ, who is the victor over sin, death, and the world.”

Jay began writing his column in October 1994 soon after he was elected executive secretary of publications for the Covenant Church and became editor of the Companion. We are grateful that for 25 years he has shared Jesus in his thoughtful contributions to the Companion.