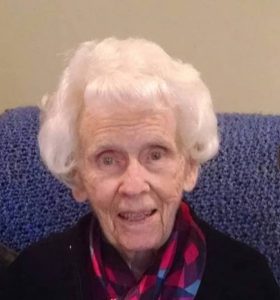 Geneva was born on the family farm near Oberlin, Kansas, to David Theodore and Esther Amanda (Carlson) Noren on October 6, 1925.

Geneva attended a one-room school house near her family farm for grades 1-8. She then “batched” in town on a weekly basis for all four years of high school. She graduated with highest honors from Decatur County High School in 1943.

Starting in 1944, Geneva attended Swedish Covenant Hospital as part of the Cadet Nursing Program, which had been launched a year earlier to ensure an adequate supply of nurses during the war. She graduated as an RN in 1947 with highest honors.

She entered North Park Junior College and Bible Institute. After a year, she accepted a call to the mission field in what was then the Belgian Congo, where there was a shortage of nurses.

Gordon followed a year later, and the couple was married on September 2, 1950, in Leopoldville, the capital of the Belgian Congo.

The Congolese government presented her with a medal for long service to the country.

Geneva said she had a graduate “Mom” degree. In Lingala, she was called “Mama” and “Koko,” meaning “Mom” and “Grandmother.”

She and Gordon produced many booklets on the Christian life for the Congolese people. With Geneva’s assistance, Gordon wrote a three-volume New Testament commentary for the Congolese. The set has been used as textbooks in Bible schools.

After their retirement, the couple served several interim pastorates and were involved in the Covenant’s School of Prayer and Evangelism.

She was preceded in death by her husband and a grandchild.

Memorials may be sent to Herndon Covenant Church or the Paul Carlson Partnership’s Congo Clinic Initiative.