A Call in the Wild

Meeting God in the loneliness

I crave peak spiritual experiences. But I’ve found that even for a pastor, most of life takes place in the long valleys between the peaks. During one particularly long valley, I felt dangerously discouraged. Ministry had become routine and I didn’t feel God’s presence. I was desperate to hear God’s voice and to experience something more than the daily tedium.

My favorite place of refreshment is the northern lake country, so I decided to retreat in the Boundary Waters Canoe Area along the Canadian border in Minnesota. Although I had been there many times, I had never gone solo. I planned a four-day trip. The first day was for self-examination and confession. Day two would be for renewal and recommitment. On the third day—the Lord’s Day—I would worship. I would travel home on the fourth day.

I left on a Thursday and I felt the weight of loneliness hit me even before I left town. My wife, Laura, and I had an emotional goodbye because we both knew that this trip was important and a little bit dangerous. The 11-hour drive was lonely. The simple bunkhouse I slept in that night felt like a black hole. As I paddled away from the outfitter on a rainy Friday morning, I felt a mixture of fear, anticipation, and dread.

I sublimated my anxiety into hard paddling against a strong wind as I attempted to get comfortable in a solo canoe for the first time. In just under an hour I was at my first portage—a sweaty half-mile walk with a canoe and backpack on my shoulders. At the end of the trail, I dropped the canoe and walked back the half mile to retrieve my other, heavier backpack. By midmorning I was again paddling across a four-mile lake, still facing the wind. I found my next portage and repeated three more hikes on another half-mile trail.

With the portaging behind me, I had nothing but big water ahead. But open water has no protection from the wind. Whitecap waves were churning beyond my little bay. I paddled to a nearby island with a campsite to wait out the wind. As I approached the island, a bald eagle appeared, gliding down out of the sky right at me. He screeched loudly, and then sailed off across the bay.

The campsite turned out to be comfortable and picturesque. After puttering around for a couple of hours I finally accepted that this was where God wanted me to be. It didn’t take long to unpack my gear and settle in. As I set up my camp, I talked with God about the trip. I probably sounded crazy talking out loud by myself.

I believe that the Holy Spirit puts thoughts in your head. I think we have to pay careful attention when he does this. So on this trip, I spoke them out loud. Then I heard myself say something that surprised me. It came out of my mouth before I thought it.

First and foremost, you must see to your own holiness.

I repeated it. Then I said it several times.

For the first time, it felt like I was having a real two-way conversation with God. I took out a spiral notebook, nestled into the cleft of a large boulder away from the wind, and began to pray and pour out my thoughts on paper.

There is a lot of grief in the life of a pastor. I sin, yet I tell others how to live. I’m responsible for my own soul, and I’m responsible to many others. I feel grief when a person rejects God or a marriage falls apart or a child breaks their parents’ hearts. When that happens I feel like I have failed—if only I had taught better or prayed harder or stepped in at the right time.

And these griefs pile up. Most are small; some are large. They accumulate and they need a way out. One of my goals for this trip was to go far enough away that no one would hear me cry. I did a lot of crying.

Is it hard to believe that God has a name for each of us? Doesn’t our Shepherd call his sheep by name?

I spent the afternoon inking out my fears and regrets. I took a hard look at patterns of behavior I’m not proud of. I confessed many flaws that afternoon, and asked God to forgive me and strengthen me and cleanse me. In the evening, I tore each page of confession from my notebook and fed them into the campfire. As God had erased my sins, I watched them dissolve in the flames.

With the sun setting behind the spruce trees, I went to bed exhausted both physically and emotionally. I resolved to set out again at dawn.

A beautiful morning broke the next day and I quickly packed up my gear. I said my prayers, but there was no conversation. I felt a little unsettled as I started out, as if I was missing something. I set that feeling aside and headed out for what I expected to be 12 miles of paddling. The water was calm, but my back was sore. A couple of hours went by and I got frustrated with my pace. I stopped on a rocky shore to stretch and take some ibuprofen. Then I launched again, but I felt disoriented and tired. I got lost.

Finally I decided that I didn’t want to spend my entire day paddling just to reach an arbitrary goal. I was supposed to be renewing my faith and recommitting myself to my call. So I hugged the shore and began searching for a campsite. But I couldn’t find camps that were supposed to be there, and the ones I found were already taken. I started to feel anxious. And then I heard these words come out of my mouth: Go back where I told you to camp.

Once again I realized I had been set on my own agenda. “OK, God,” I said, “I’m listening.” Six hours of paddling later, I was right back where I started. I set up camp again.

In the mid-afternoon, I focused on a time of recommitment. After I prayed and read Scripture, I decided to renew my baptism. I changed into a swimsuit and waded into ice cold water. I turned to face the island and slipped under water. When I came up, I immediately heard something I’d only heard a couple times before. I decided it was my imagination or the cold water in my ears. Then I heard it again—and again. It was the song of a wolf. It wasn’t just one wolf. There were several different howls, and they came from several different locations.

Shivering on shore, I could hear three distinct packs of wolves taking turns calling to each other. The sounds floated through the trees and echoed back from the distance. It was like a dream. I said out loud, “This isn’t really happening.” But it went on all afternoon. Whenever I wondered if it was all my imagination, the packs would begin again.

That evening after dinner, I listened to a wolf so close to camp that I dug out my binoculars and searched the opposite shore to find him. A magnificent timber wolf stepped out of the forest to the water’s edge. He swelled his chest and let out a long howl. Other wolves answered him, and he stepped forward. After another howl and response, the wolf trotted back into the forest, apparently secure that he would find his way home. 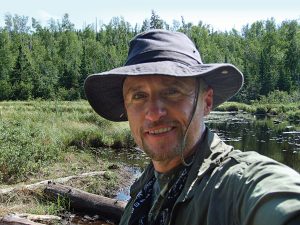 The image of that wolf is burned into my memory. In some very personal ways, God impressed several lessons for my life. I saw myself, homeless and wandering; calling for God; listening for a voice and trying to find my way home through the wilderness of a world damaged by human sin. It was one of the most hypnotic, spiritual moments of my life.

I picked up my journal and it fell open to an entry I had written years before. I was in Alaska where I learned an Alaska Native word that I had liked and written down thinking I would use it for my dog. The word means “wolf.” My heart jumped.

Then I spoke these words out loud: That’s not your dog’s name, that’s your name.

The moment was so personal that for a long time I didn’t tell anyone about it but my wife. I still prefer not to share the word written in my journal. But is it hard to believe that God has a name for each of us? Doesn’t our Shepherd call his sheep by name?

I wasn’t sure that it was a particularly flattering name. In the Bible the wolf is a thief and false teacher. In literature, the wolf is traditionally portrayed as cruel, aggressive, bad tempered, and territorial. A glutton, the wolf always wants more. I see a lot of my weaknesses in the wolf. Yet even the wolf will be redeemed. In nature, the wolf is loyal to his community, brave, and faithful. Isaiah wrote that someday the wolf will live in peace with the lamb.

I had a lot to think about that night. I crawled into my sleeping bag feeling inexpressibly grateful. I woke up on Sunday morning with more anticipation of worship than I’ve felt in a long time as I stepped out into a magnificent outdoor cathedral.

I ate breakfast and settled down with coffee for hours of worship, prayer, and journaling. The morning was a rare time of spiritual ecstasy. Even after worship, I felt like I was floating on air. As I began to pack up the camp, I turned on a transistor radio and listened to a folksy Sunday morning show. The DJ told stories and played a collection of folk and country songs. I was deeply enjoying myself.

As noon approached I felt sad that such a wonderful morning should end. Then I remembered how I had left the day before without checking in with God. So I prayed, “God, I could stay here all day and camp here again tonight. I really don’t want to take another six-hour paddle if I’m just going to end up back here again!” I asked out loud, “Do you want me to stay, Lord?”

Instantly, the radio faded midway through a song. The friendly DJ said something like this, “Well, all good things must come to an end, and it’s time to go. So travel light, be good, and be kind.” The show ended with a soulful version of “Amazing Grace.”

I melted into a heap in the dirt and cried tears of joy. It took a long while to collect myself. But I knew it was time to begin the long trek back home. When I pulled away from that island for the last time, I wasn’t even surprised when I looked up and saw a bald eagle fly over me.

I have relived this experience many times. When I don’t feel God’s presence, I go back to this memory. God is my friend. God is always present. God is interested in my life. If these things are true for me, they must be true for you. God is fascinated by you and wants a real relationship with you. He has a name for you. God walks with you in this world, and has a home waiting for you. Be alert. Be patient. First and foremost, see to your own holiness. 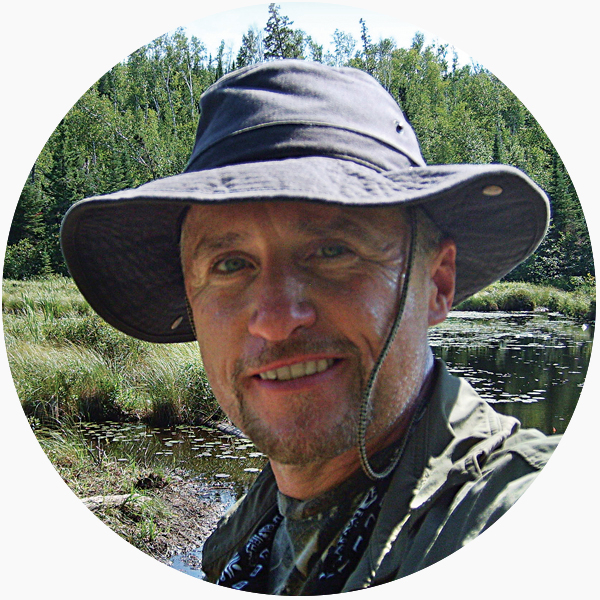 Mike Coglan is the senior pastor at Community Covenant Church of Kearney, Missouri. He is also a writer, speaker, and vice-president of the Arctic Broadcasting Association serving western Alaska and the Russian Far East. He and his wife, Laura, enjoy adventures with their dog Kenai, a black and blonde German shepherd.