CHICAGO, IL (April 16, 2019) North Park University’s Axelson Center for Nonprofit Management has grown in prominence since it was established 20 years ago because it has focused on teaching practical applications of research on best practices, says executive director Pier Rogers.

It’s strong reputation for providing that kind of training is why 500 people are expected to attend its Annual Conference on May 2 at the Hyatt Regency O’Hare, Rogers says, adding it is the largest conference of its kind in the Midwest.

The theme this year is “The Arc of Innovation: Timeless Lessons from Thriving Nonprofits.”

“I think practitioners in the field are looking for knowledge that is immediately applicable, and I think we do a really good job at providing that,” Rogers says.

Few of those lessons were being taught around the country when the center was founded in 1999 as part of the university’s School of Business and Nonprofit Management, Rogers says. There were only about 20 nonprofit education programs around the country at the time.

Although the center focuses on practical applications, its training is based on the current research into best practices, Rogers says. “We are based at a university, which is significant, so we have the educational expertise to draw on as well as the expertise of nonprofit professionals.”

At this year’s conference, the center will honor 20 nonprofit leaders in the Chicago area who have contributed to ongoing innovation. They were nominated by peers and guide diverse organizations that include the Adler Planetarium, the Black Ensemble Theater, anti-domestic abuse organization Between Friends, and the Chicago Literary Alliance.

In addition to the conference, the center offers programs that include workshops, custom trainings, and BootCamp for New Nonprofit CEOs, a three-day intensive program. “One of the things we strongly believe is we want to encourage the smaller newer emerging organizations get on the right track early on,” Rogers says.

Nonprofits often struggle due to a lack of leadership training. People want to do good and are driven by their hearts but learning how to change the world or communities in the best way possible is critical. We combine the head and the heart. – Pier Rogers

Nonprofits often struggle due to a lack of leadership training. “People want to do good and are driven by their hearts but learning how to change the world or communities in the best way possible is critical,” Rogers says. “We combine the head and the heart.”

The center is named for Nils Axelson, who retired from the Covenant Benevolent Institutions after serving for 40 years as its president. He emphasized that organizations be guided and governed by a “moral compass.”

Nonprofits with that moral compass are needed as much as ever, Rogers says.  “Right now, we are in challenging times, and I think the role of nonprofit organizations in giving voice to many different groups with different points of view is important, and it is critical to our democracy,” Rogers says. “They help ensure those voices are heard.” 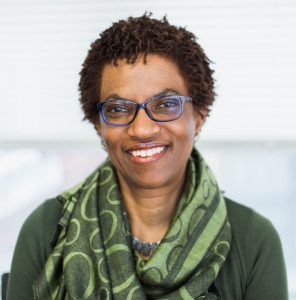 One of the church’s mission is to give voice to the marginalized, but convincing leaders to get business training remains a difficult uphill battle, Rogers says.

The School for Business and Nonprofit Management partners with North Park Theological Seminary to offer dual degrees, but churches and other faith-based organizations are still only beginning to understand the importance of training in nonprofit management, Rogers says.

“I hear people say that once they get into a faith-based organization or church, they have learned how important management classes would have been,” Rogers says. “They have a staff. They have a budget. Evangelism is marketing, and churches have to think about how they reach people they want to serve.”

The university has been able to serve more people because of the Axelson Center, Rogers says. “It is a gateway to the school,” she explains. “People will come to the conference and learn about this gem that is North Park University.”