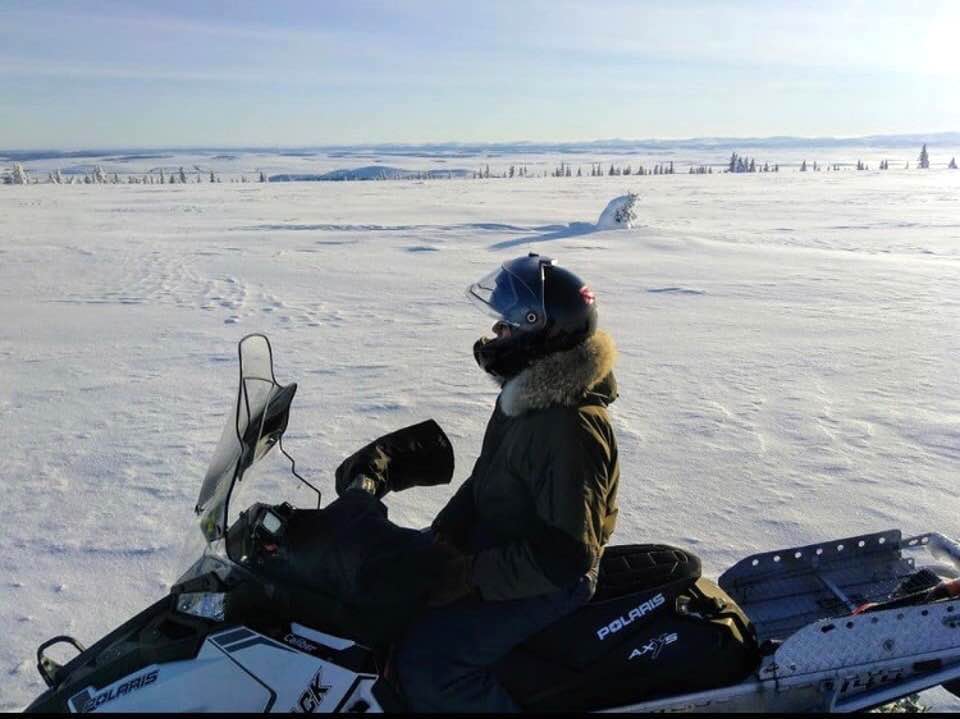 ANCHORAGE, AK (April 9, 2019) – James Barefoot was traveling about 30 miles per hour on his snowmachine in whiteout conditions across the ocean saltwater ice. He never saw the protruding piece of ice—until his vehicle slammed into it.

“I was thrown to the right of the machine and my helmet hit the ice,” says Barefoot, associate superintendent of the Alaska Conference. He suffered no injuries, but the accident highlights how dangerous his job can be as he visits churches that “are off the road system.”

The incident occurred on a 1,100-mile trip during which he visited six villages—some multiple times—in February and March.

Included in those travels was a trip of nearly 600 miles to deliver Mary Gandee her official call letter, inviting her to serve the Shaktoolik Covenant Church in an Inupiaq village of 260 people.

There were several days he rode 11 hours. “That’s a long day,” he says, laughing. Sometimes he wound up riding through water, so he made sure to pack the letter in an extra-large Ziploc bag so that it wouldn’t get wet. 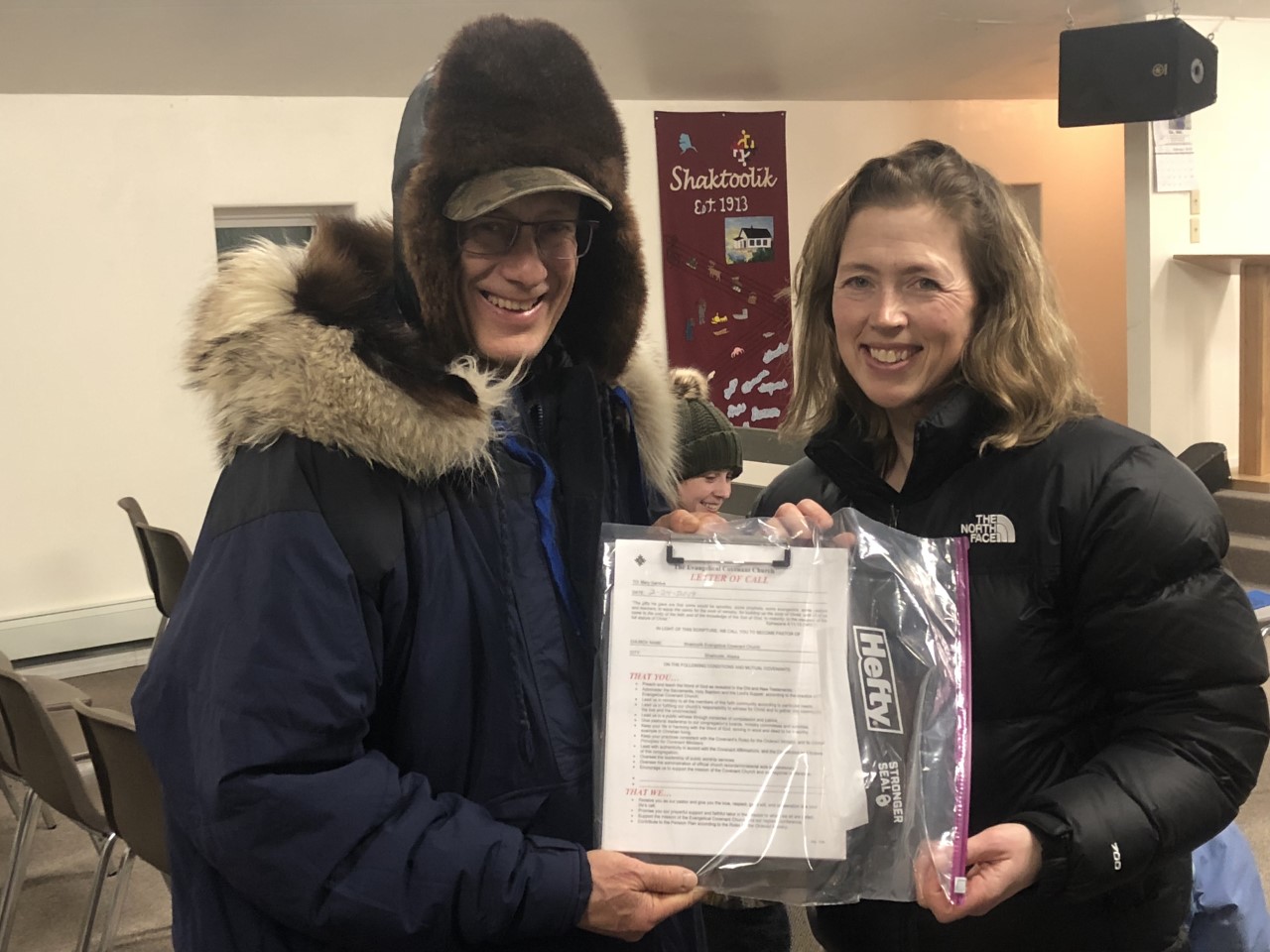 “It was very special to have my call letter delivered in such a unique way,” says Gandee, who previously lived in Wenatchee, Washington. “The distance and endurance of the trip James took reminds me of the call here. His efforts remind me of all the prayerful and faithful people who have served before us in the region and made a way for us to be able to serve here.”

Barefoot had two other near misses. He had to maneuver the bouncing vehicle as it climbed and descended several small, tree-packed mountains. “Considering what we accomplished, ‘Polly’ (the name he gave his Polaris snow machine), and I feel quite fortunate to have only kissed one tree!”

In that incident his helmet hit the tree and saved his head once again. Barefoot noted, “‘Polly’ wears a little duct tape on her glasses (windshield) now, but we did break trail to Hot Springs!”

Then there was the third “very minor” event. “I was thrown to the left, and my left foot caught in the stirrup of the machine causing my leg to twist like a pretzel. I was actually surprised my leg did not break.”

Barefoot says his accidents were no big deal. “Minor wrecks—such as being thrown from the machine— are common. You usually just land in soft snow. Riding a snowmachine between villages in Alaska is very rough riding, much like riding a dirt bike in the Lower 48.Although he says he is sore for days after returning home, a side benefit of these trips is that they keep him in good physical shape. “Getting a 600-pound machine unstuck in five feet of snow is a tremendous workout,” he says.

Barefoot says the travel is important as he meets to encourage and discuss business with church leaders in the Alaska bush, where some churches don’t have pastors. When he visits those congregations, he often preaches and serves communion.

On his most recent—and last trip—of the season, it rained for 150 of the 175 miles he traveled. “Very miserable!” he says.

Still, for much of the time, “It’s incredibly beautiful out there,” Barefoot says.

Barefoot has never been stranded in the wild, but he has had to change drive belts and spark plugs. If he ever were to encounter trouble, others would know about it quickly. A beacon sends a signal every 10 minutes and plots a point on Google Maps. The equipment can also enable him to send a text that he is OK.

Climate change has reduced the number of months he is able to travel. He used to be able to start in December and ride into April. For the past five years, warmer weather has lengthened the routes he must take. He has been unable to travel over the Bering Sea between the Yukon area and Unalakleet because the ice was too thin. “In some places, the ice is completely gone,” he says.

Still, traveling by snow machine is far more economical than by plane, which could cost upward of $100 between villages. Gas for the same trip might cost $36.

Barefoot does more than offer advice and encouragement to pastors in the remote villages. He also makes basket sleds that he donates to the ministers. He has made eight so far.

“It’s a very handy tool in the village,” he says.

Marc Murchison, pastor of Mountain Village Covenant Church, has used his to haul a successfully hunted moose and transport people to another village for a special worship gathering. Some villagers use them to carry 33-gallon cans of drinking water retrieved from freshwater springs.

As the weather warms, he parks Polly and visits churches by air. That’s not always easy, either. He wrote on a Facebook post on Tuesday about his trip to Mountain Village for the Alaska Conference Annual Meeting that started on Thursday.

“After boarding then de-boarding and finally boarding my plane in Anchorage, then an hour late, boarding, de-boarding then boarding my plane in Bethel, arriving at Mountain Village in thick fog then turning back to Bethel, then turning back again to make a pass at St Mary’s runway and landing in thick fog, calling Pastor Marc to come get me by ATV, waiting an hour in the closed terminal, riding back with Pastor Marc 20 miles in cold wet weather, halfway had a flat rear tire, moved me to ride backwards on the front ATV luggage rack in a ab crunch position for 30 minutes, I finally arrived in Mountain Village at 10:30 pm, baptized in mud!”Vi