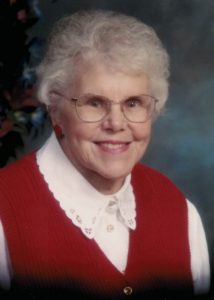 Alene was born November 13, 1924, in DeKalb, Illinois, to Emil and Signe Winstedt, and grew up in Cadillac, Michigan, Chicago, and Topeka, Kansas, where her father served Covenant churches as pastor. She attended North Park College and Washburn University.

A pianist who could play by ear, Alene provided accompaniment to countless musical groups.

Alene was a resident of Covenant Village of Golden Valley, Minnesota.

She was preceded in death by her husband, Stan in 1984, and by her brother Clarence Winstedt. She is survived by two children, John Hunt and Sharon Mulé; three grandchildren and two great-grandchildren.

A memorial service was held March 30 at Roseville Covenant Church. Interment was at Wayside Cemetery in Barron, Wisconsin.