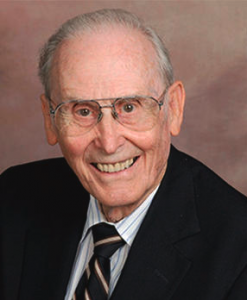 George was born September 26, 1920, in Trail, Minnesota, to Benhard and Palma Wold. He graduated from Lutheran Brethren Seminary in Fergus Falls, Minnesota. He was ordained by the Covenant Church in 1957.

He served a three-point parish in Bigfork and Effie, Minnesota. He served as pastor of the Covenant Church in International Falls, Minnesota, starting in 1945, and served that

congregation for 29 years, until 1974. He subsequently took a pastorate with the Free church in Coon Rapids, Minnesota, where he ministered for 20 years. He then served two interims before becoming pastor to seniors at First Evangelical Free Church in Maplewood, where he ministered until he turned 95.

George and Ruth were residents of Covenant Village of Golden Valley, Minnesota.

Survivors include a daughter, Joyce Elkjer; a son, Mark Wold (Marilyn); five grandchildren and seven great-grandchildren. He was preceded in death by Ruth and a son, Daniel.

A memorial service will be held at 11 a.m. on Saturday, April 6, 2019, at First Evangelical Free Church in Maplewood. Visitation is one hour prior to the service.