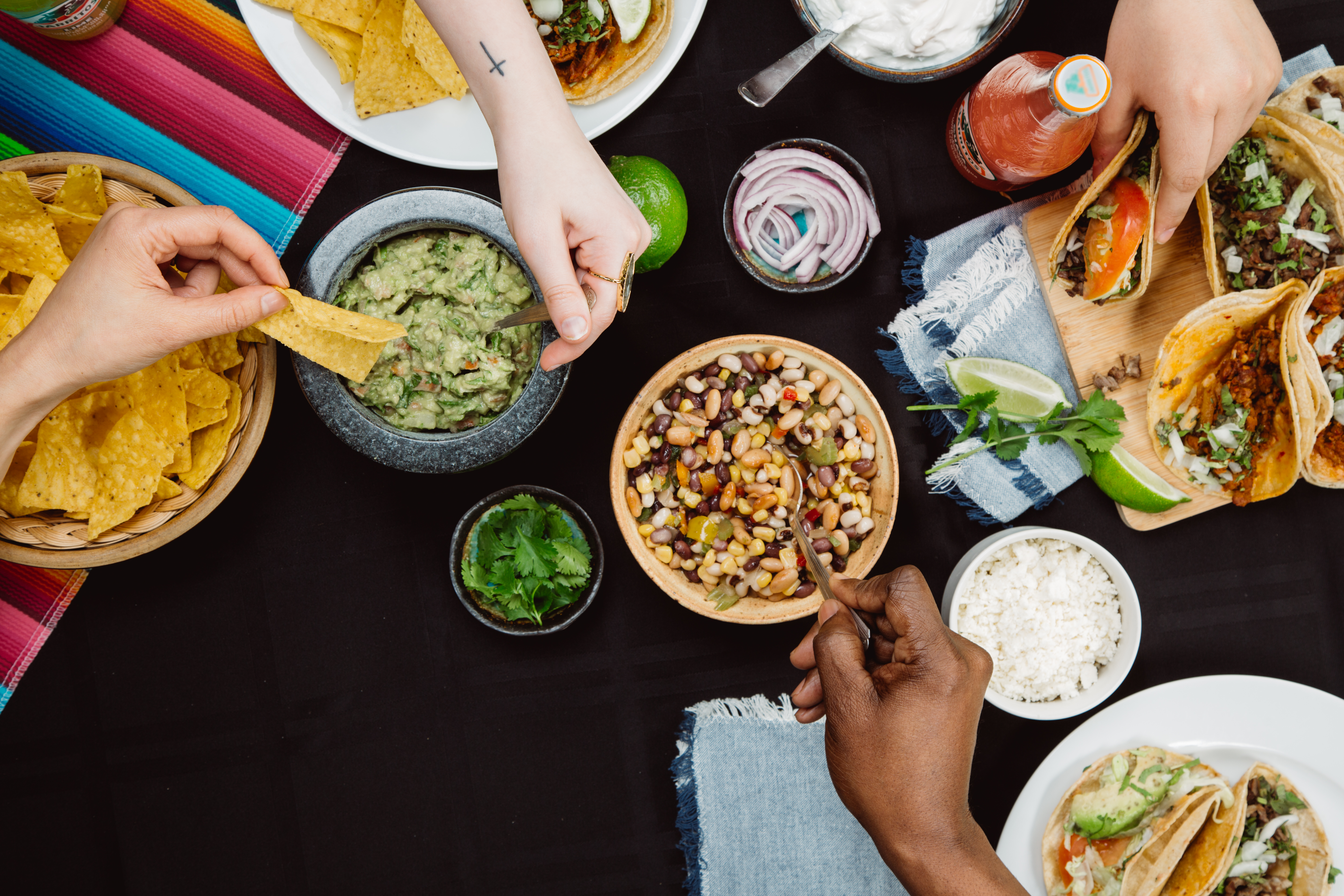 The Good News of Taco Tuesday

Finding community, one meal at a time

My co-worker Marilyn has been celebrating her 39th birthday every year for the past 26 years. She throws herself a party with enough Mexican food and enchiladas, tacos, and guacamole to feed 75 guests. It’s one of the most epic gatherings I’ve ever seen in a person’s home.

The evening begins with people mingling, eating chips and salsa. When dinner is ready, Marilyn ushers her guests around buffet tables and shares the story of her original 39th birthday party.

When Marilyn was 38, life for her pretty much caved in. Her marriage ended, and she had to file for bankruptcy because of a failed business. Marilyn found herself with not much left. But what she did have was a loving, supportive group of friends who helped carry her through the darkest year of her life. So when her birthday came, she decided to throw herself a party that would also be a celebration of her friends—all those who were there when she needed them most.

When Marilyn had what felt like nothing else, those closest to her reminded her she was loved and cared for, that there was still much in this life to cherish, that her future could be brighter than her past. By celebrating her 39th birthday over and over, she does not try to hide that she’s getting older but rather recreates a birthday dinner that provided meaning in the midst of the toughest of years.

Marilyn’s story brings us to the intersection of food and faith. How often do we think about eating with others as a way of sharing the good news of Jesus?

Eating Our Way into the Kingdom of God

In Luke’s Gospel, a surprising theme emerges: Jesus is eating—a lot! “Jesus is either going to a meal, at a meal, or coming from a meal,” says theologian Robert Karris in Eating Your Way Through Luke’s Gospel. This observation is important because everything Jesus says and does reveals something about the reality of the kingdom. When Jesus eats, he’s not just filling his stomach. He’s not concerned primarily with caloric intake; he’s teaching us how it looks to live as citizens of the kingdom. We have a lot to learn from Jesus’s dining habits.

In Luke 5:27-32, Jesus is eating at Levi’s house. At first glance, that might seem fairly innocuous, but the text tells us that Levi is a tax collector, and in that day and age, tax collectors were considered the lowest rung of society. To make matters worse, there was a large crowd of tax collectors and others, presumably other looked-down-upon people. Their presence was scandalous to the Pharisees and teachers of the law, and they complained to Jesus’s disciples about it.

But Jesus wasn’t too bothered by what they thought. Instead, he made it a habit to hang out with all the “wrong” people, befriending the outcast, the unclean, and those traditionally excluded from the family of God. “Eating was for Jesus a key means by which he proclaimed the coming of God’s reign,” says theologian Gordon Smith in A Holy Meal: The Lord’s Supper and the Life of the Church. By eating with these people, Jesus broke down barriers and called people into
a new way of living with God and with one another.

Perhaps before we invite people to church, we should invite them to dinner.

In his letter to the Ephesians, Paul talks about how Jesus came to destroy the dividing wall of hostility between different groups of people and create one new humanity. Jesus teaches us how to be fully human and live in the fullness of God’s intentions for this world. Time and time again we see Jesus using food and table fellowship to break down lines of division and invite people into a new way of living with each other according to the ways of God’s kingdom.

Eating Together as the Antidote to Loneliness

Author and Covenant minister Eugene Cho has said, “Loneliness is the greatest disease in our society.” He touches on an uncomfortable truth. While major parts of the developing world struggle with extreme poverty and physical diseases, we in the United States enjoy a relatively high standard of living. Yet we suffer in other ways. Our fast-paced, hyper-individualized, tech-saturated world has left us simultaneously more connected and more alone than ever before. Long-standing communal structures that once provided stability to families and communities have slowly eroded, leaving some to wonder if meaningful relationships are even possible today. The once ubiquitous nightly family dinner is now a rarity. The “village” mentality that allowed children to play unsupervised in their neighborhood now seems quaint. The multi-generational household with children, parents, and grandparents living together under one roof is now an exception, rather than an expectation.

Although it doesn’t often make it to the top of the spiritual disciplines list, the practice of sharing a meal with others is perhaps one of the most important things we as Christians can do. “In the midst of a world that increasingly seems to have lost its way…Christian spirituality has something important to say about the way that sharing tables nourishes us both physically and spiritually,” says Barry Jones, associate professor of pastoral studies at Dallas Theological Seminary.

There’s a word that perfectly articulates how people of faith can think about the significance and impact of shared meals. The word is “companion,” and it comes from two Latin words: com, which means “with,” and panis, which means “bread.” Companion means “one who shares bread with another.” Companions are people who eat together—people who share life together, people who take a loaf of bread, break it in half, and make sure both have enough to eat.

What would happen if we were metaphorical bread for someone else? To begin with, we could start by literally breaking bread with people. We could start having people over for dinner—not just people we’re already friends with, but people with whom we normally wouldn’t think of having dinner. What if we went out for coffee or lunch with someone we don’t know well? Or someone we know who could use a friend? As Jones puts it: “Our dinner tables have the potential to be the most ‘missional’ places in all of our lives. Perhaps before we invite people to Jesus or invite them to church, we should invite them to dinner.”

A couple of years ago, I gathered with a small group of friends from church for something we called Taco Tuesdays. In contrast to Marilyn’s extravagant affairs, our gatherings were pretty simple: friends from church eating tacos together in our town of Warren, Rhode Island, whenever our schedules allowed. That was it.

But then we started to become more intentional. We wanted to become missional in our eating. So we created a reliable routine of eating together every other Tuesday.

We don’t pray before the meal. Instead, we carve out time during the meal to go around the table to say one thing we’re thankful for. By substituting gratitude for saying grace we positioned ourselves to be more welcoming to our non-churchgoing friends. Then we started inviting friends who weren’t Christians to join us for Taco Tuesdays. Some of those friends have become part of our core group. What used to be a group of friends exclusively from church has grown to include many non-churchgoers. We don’t even really eat tacos anymore!

I always look forward to this gathering. Sometimes the meals are elaborate feasts, and sometimes we simply order pizza. Regardless of the meal, the conversation around the dinner table is rich and life-giving.

One of the first things Jesus did after he was raised bodily from the grave was to eat.

In her TEDtalk, architect Grace Kim talks about the direct correlation between eating together and communitas—a Latin word that means “spirit of community.” In her research, Kim found that people who regularly eat meals together experience more communitas than those who eat with others less frequently.

An epidemic of loneliness infects our society. There’s never been a more important time for people to find occasions to eat together. We know that food sustains us, and that without food we physically could not live. But perhaps our lives are dependent on eating together for reasons that go beyond physical nourishment. Our lives—indeed our society—depend on eating together for our social, emotional, and spiritual health.

Jesus did a lot of eating during his public ministry before his death, but what about his ministry post-resurrection?

One of the first things Jesus did after he was raised bodily from the grave was to eat. At the end of Luke’s Gospel, we encounter Jesus, alive and well, asking for something to eat. In fact, the disciples give him broiled fish, a point Luke deliberately makes.

“‘Look at my hands and my feet; see that it is I myself. Touch me and see; for a ghost does not have flesh and bones as you see that I have.’ And when he had said this, he showed them his hands and feet. While in their joy they were disbelieving and still wondering, he said to them, ‘Have you anything here to eat?’ They gave him a piece of broiled fish, and he took it and ate in their presence” (Luke 24:39-43).

This is significant to our understanding of Jesus, his ministry, and his resurrection. First, it reveals continuity between Jesus’s ministry prior to his death and his ongoing ministry after his resurrection. What was important then continues to be important now. Second, this account serves to reaffirm the goodness of creation in general, and human bodies in particular. Our flesh and bones, our tongues and taste buds are ultimately not something to be thrown off at the end of our lifetimes; they are an essential part of God’s good creation and will continue to have purpose in the age to come when God does for the whole world what Jesus experienced on Resurrection morning.

If all we hope for after we die is to live as disembodied souls floating in the clouds as part of a heavenly choir, I’m just not interested. I love pizza way too much to ever believe in that kind of eternal destiny. I love apple crisp way too much to even entertain the idea that heaven would deprive me of what is so wonderful and pleasurable about being an embodied person. I’m holding out for a resurrected body with taste buds intact.

As followers of Jesus, part of our vocation is to give the world today a glimpse of what the world tomorrow will look like. Part of our job is to give a broken world a glimpse of what healing and wholeness look like. Part of our responsibility is to give those around us a foretaste of God’s good world redeemed and perfected. By eating together we can draw closer to God’s kingdom through radical inclusion. By eating together we can combat loneliness. We have the opportunity to do this, one meal at a time. 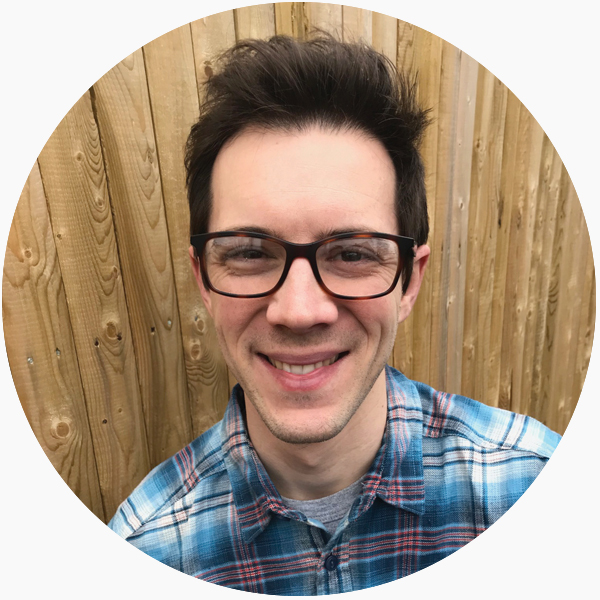 Ric Wild is an ordained Covenant pastor currently working for a nonprofit that helps entrepreneurs start food and beverage companies. He lives in Rhode Island with his wife, Carol, and their nine-year-old foster daughter. You can usually find him riding his vintage bicycle, guest preaching throughout New England, or sharing meals with friends.