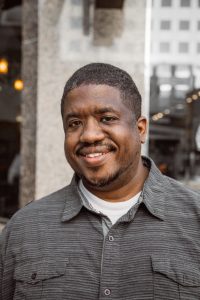 A familiar social media ritual happens in my Facebook feed every day. Someone will post a clickbait headline designed to shock, surprise, or inflame. Then people post their reactions. Many times those reactions, instead of being written comments or emojis, are animated GIFs.

These GIFs are three-to-six-second-long bits of looping footage, often from popular movies or TV shows, meant to convey a specific emotion or idea in a vivid, condensed shorthand. Every time I witness James Harden tilting his head, Viola Davis grabbing her purse, or Dwayne “the Rock” Johnson clapping at an award show, I’m seeing my friends’ emotions amplified through an appropriated image. And just as often, I do the same in return.

One of my favorite GIFs features the goateed actor Hassan Johnson with jaw agape as the camera dramatically pans to the left. I use this one a lot, sometimes even sarcastically, to feign shock. It’s funny. His face is all, “Whoa…what? Are you serious?” (You’ll likely see it under a GIF search for “wow.”)

On a whim, I decided to look up its source. I knew the character was Roland “Wee-Bey” Brice from HBO’s The Wire, but I couldn’t remember the scene or why Bey was so surprised. As it turns out, it’s from season one where Wee-Bey and Stringer Bell are talking about some gang activity. Right before the moment of surprise, Bell (Idris Elba) informs Wee-Bey that the woman Bey and his partner had shot was an undercover cop, and because she had survived, she was likely to testify.

Now the Wee-Bey GIF seems much less appropriate to show my surprise over whether I’ve been playing Monopoly correctly.

What I had always seen as a lighthearted moment of mock surprise was, in its original context, a chilling moment of reckoning. Now that I know that, the Wee-Bey GIF seems much less appropriate to show my surprise over trivial matters like whether I’ve been playing Monopoly correctly. Seeing the image in its context has changed its meaning for me.

As I reflect on biblical literacy in American culture, I think a lot of evangelicals use Bible verses in the same way my Facebook friends and I use GIFs. That is, we may get the general idea of the verse, but when it’s divorced from its original context, we lose some of its potency.

For example, plenty of high-profile Christians love to quote Philippians 4:13. NBA sharpshooter and affable role model Steph Curry has even been known to write the words “I can do all things” on his sneakers, as an homage to that verse. But here’s the thing. When Paul wrote those words, he wasn’t talking about an athletic competition or any similar lofty goal. He was talking about money. Specifically, he was thanking the church in Philippi for supporting him financially, because he’d had times when he had to make do without such support.

“I know what it is to be in need, and I know what it is to have plenty. I have learned the secret of being content in any and every situation, whether well fed or hungry, whether living in plenty or in want. I can do all this through him who gives me strength” (vv. 12-13, NIV).

Curry isn’t wrong exactly—Christ does give him the strength to be an amazing basketball player—but the way he uses that verse indicates he doesn’t totally get what Paul is saying.

If we want to inspire biblical literacy in our congregations, we must help people understand the Bible,
not simply as a source of sound doctrine but as a tapestry containing an epic story. Because if you like a good story, then you won’t be satisfied with just a small snapshot—you’ll want to know how that part ties into the larger whole.

And in this case, the whole is not just a story, but a person—the God of the universe who became flesh, dwelled on the earth, was brutally murdered, and yet somehow lived to tell about it. If we want to know this God better, we can’t be satisfied with learning his story in tiny, bite-sized pieces.