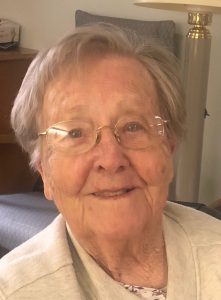 Jean was born June 1, 1927, in Minneapolis, Minnesota. She graduated from North Park College and Northwest Institute of Medical Technology.

That same year Jean and Chet were called to serve in the Democratic Republic of the Congo. They ministered in several areas of the country, including Gbado, Wasolo, Bumba, Gemena, and Kinshasa. Jean’s work included keeping records, holding Bible studies, leading classes on the Bible, and teaching reading. When the Larsons lived in Kinshasa in the late sixties, Jean taught classes to the wives of soldiers in army camps and to the wives of students at the Evangelical Theological School. She also worked in the clinic run by the personal doctor of Congo’s president, Mobutu Sese Seko.

In the midst of the political upheaval and rebellions in Congo in the sixties, the Larsons returned to the U.S. for two years where they served the Covenant church in San Jose, California. Although they served an addition term in Congo, they moved back to the States in 1970, where they served Covenant churches in Simi Valley and San Diego, California. Chet went on to serve two terms as superintendent of the Southeast Conference.

In 1991, they returned to Congo at the request of the Covenant Church there, but within a few weeks, an uprising of soldiers forced all missionaries to leave the country. The Larsons returned to Florida and served Faith Covenant Church in St. Petersburg until Chet retired in 1992. In 1993, the couple were invited to return to Congo for six months to teach classes for leaders, teachers, and nurses.

In retirement they lived in Florida and later at Covenant Village of Northbrook, Illinois.

A memorial service will be held at 11 a.m., Saturday, April 6, at Northbrook Covenant Church. Memorial gifts may be given to the Benevolent Care Fund for the Covenant Retirement Communities.