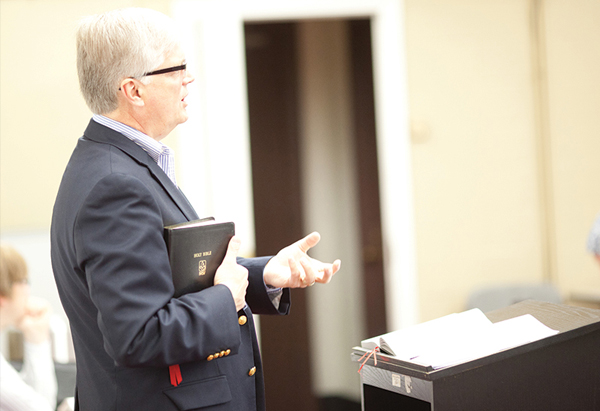 My mother loved flannelgraph. When I was a boy, she used it to teach Good News Clubs and Sunday school. She had flannel backgrounds with artists’ conceptions of Middle Eastern houses and countrysides, marketplaces and the temples, the Sea of Galilee and the Mount of Beatitudes. Onto these backgrounds she would place the figures of Abraham and Moses, David and Daniel and, of course, Jesus, his apostles, the crowds, and his opponents. It was a simple, low-tech method of teaching—but it was a practical and enchanting one. Mom is now ninety-two, still teaching Sunday school and still using some of the same flannelgraph that mesmerized me.

One of the stories she used to tell is found in Mark 2. Jesus is surrounded by people who have filled the house and crowded around the windows. A group of men with a paralyzed friend are frustrated that they cannot get close enough to Jesus for him to heal their friend. So they climb to the roof, dig a hole, and lower the man to Jesus and, of course, he is healed. As a child I marveled at this. I could only imagine what would happen to me if I tore a hole in the roof of our house! Rain would pour through along with the cold or heat. Birds and other animals would take up residence. And, not least, my father would be furious! But Jesus did not seem the least put out by their extraordinary inventiveness. In fact, he seemed to commend it.

Recently I heard a pastor describing his efforts to reach marginalized people in his community with the good news. He cited this story and made a startling statement: “Sometimes in order to get people to Jesus you have to mess with the structure.” These entrepreneurial men didn’t let propriety stand in their way! They messed, quite literally, with the structure.

Fear can keep us from “digging up the roof.” What if we make people in power angry? What if our efforts are rejected?

This is also true of Jesus. He doesn’t let the legal and structural proprieties of the Jewish community stand in his way: he eats with sinners; he is not particularly concerned about the fate of a herd of pigs; ritual uncleanness and even death do not deter him. The various powers that be—the Pharisees, the Sadducees, the priestly aristocracy—don’t impress him. He heals on the Sabbath, touches lepers, confronts the demonic, is not afraid of prostitutes and sinners, and even responds to the pleas of a Gentile woman. He messes with the structures.

It is still easy for us to let various structures get in the way of bringing people to Jesus. There are relational structures—structures rooted in ethnicity, gender, and class. There are prudential structures. For all of our vaunted diversity in the United States we are still a substantially divided society. The structures that keep us separate keep us ignorant and fearful of one another—and they keep us from bringing each other to Jesus. Our theological structures also hinder us. Although we know it isn’t true, our theologies may suggest that some people are actually beyond help. Perhaps we imagine that we cannot cooperate with those whose theologies and practices are radically different from ours.

While we are hesitating and fretting, people who need to be loved for the sake of Jesus are ignored—or worse. Finally, prudence and fear can keep us from “digging up the roof.” What if we make people in power angry? What if we are tainted by our involvement with “tax collectors and sinners”? What if our efforts are rejected or misunderstood by the very people we are trying to reach? In Mark, Jesus made clear to his disciples that prudence was not a part of following him. Yes, they were to be wise as serpents and harmless as doves. But they were also to pick up their crosses and follow him—hardly the prudential way to go about their lives and missions!

What are the structures, barriers, assumptions, and voices that are hindering your mission? How are you going to “mess with them” to bring people to Jesus?