CHICAGO, IL (January 4, 2019) – Covenanters routinely share links to social media articles and videos that Covenant News Service believes may be of interest to others. Each Friday we post five of them. Following is a sample of those submissions—their inclusion does not represent an endorsement by the Covenant of any views expressed. 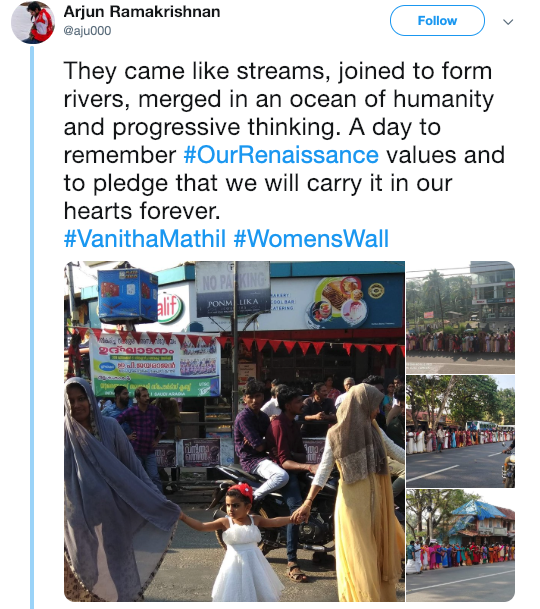 Women between the ages of 10 and 50 had been forbidden to enter a temple in India until the Supreme Court overturned the ban. Now they are permitted to worship in the prominent  Hindu temple. But protestors have barred their access. So on New Year’s Day five million women of all ages joined hands to form a 385-mile chain to protest gender inequality.

From the article: “One young demonstrator, Kavita Das, told BBC Hindi: ‘This is a great way of saying how powerful women are, and how we can empower ourselves and help each other. Of course, I support the move to allow women of all ages into the temple….Those who want to pray must have the right to pray.’”

The richest people on earth now possess 50.4 percent of all household wealth. What is our response to the injustice of that inequity?

Bowling Partners Not Bothered by Age Gap of Almost a Century

That anyone over the age of 100 is still playing any sport is pretty amazing. That he has a nine-year-old partner makes the story even more wonderful.

From the article: For Jacob and Jim the time spent together was not just about sport, but for closing the generational gap. “They sit next to each other between ends and just chat away — they are like mates,” said club president Pat Schram. “Just before afternoon tea last Saturday Jim said, ‘Will you get me a beer?’ and Jacob said, ‘I’m not allowed to yet.’ It’s just delightful.”

Faith on the Hill

The new Congress is slightly more religiously diverse than in the past, but it still is not representative of the country’s makeup.

From the article: “By far the largest difference between the U.S. public and Congress is in the share who are unaffiliated with a religious group. In the general public, 23% say they are atheist, agnostic or ‘nothing in particular.’ In Congress, just one person—Sen. Kyrsten Sinema, D-Ariz., who was recently elected to the Senate after three terms in the House—says she is religiously unaffiliated, making the share of ‘nones’ in Congress 0.2%.”

For the past six years Tim Carman has published a column in the Washington Post called “$20 Diner.” But now he confesses that the title helps confirm deep-seated biases about how much people are willing to pay for certain kinds of food.

From the article: “By writing about immigrant cuisines under a cheap-eats rubric, I have perpetuated the narrative that they should always be thought of as budget-priced. I’m reminded of a conversation I had with David Chang when he was preparing to open Momofuku CCDC in 2015….He was unspooling long, profanity-laced sentences about diners who won’t pay $17 or $18 for a bowl of ramen, no matter how costly the ingredients he used for his noodle soup.”