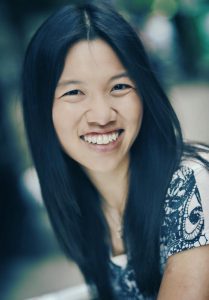 “Erin comes with an extensive career in journalism and communications,” Wenrich said. “She is uniquely qualified and highly competent in this arena. Her godly character will greatly complement our culture and help us to continue to advance the mission forward.”

“I feel so honored, humbled, and excited by this opportunity to serve as the executive director of communications for the Evangelical Covenant Church,” Ding said. “This new role represents a convergence of my identity as a Christ follower, my career as a journalist, and my passion as an advocate for equity and justice. I believe so much in the holistic mission of the Covenant, and that in following Jesus we are to serve others, to disciple each other, and to come alongside those who are marginalized, as Jesus did, and encourage them to use their voices and lead.”

She added, “I am especially eager to work alongside an experientially and racially diverse team of executives and with a group of talented communications professionals. I look forward to working together to envision fresh ways of storytelling as God continues to transform lives.”

Ding is an independent journalist and editor who tells stories through print and multimedia for newspapers, websites, magazines, and nonprofit magazines. Her work has appeared in numerous publications, including the New York Times, Midwest Living magazine, the Chicago Tribune, the Miami Herald, and the Los Angeles Times. Her writing and editing clients also include Northwestern University and the Chicago Navigators, a global nonprofit Christian ministry.

Before becoming a full-time freelance writer, Erin worked as a features reporter for the Detroit Free Press, where she wrote profiles, travel news, and features, covering race and ethnicity issues, domestic violence, immigration, crime, and courts.

She co-founded and co-leads Willow Mosaic, the racial reconciliation and racial justice ministry at Willow Creek Community Church in South Barrington, Illinois. She also serves on Willow Global’s Latin America Board, which advises and steers the church’s partnerships in El Salvador, Bolivia, Costa Rica, Guatemala, and the Dominican Republic.

While in college, she attended New Community Covenant Church in Chicago while it was in its infancy at a local movie theater. During her time in Detroit, she was a part of LifeChurch Canton in Michigan, an ECC congregation, while it was still meeting in an elementary school.

Ding graduated from Northwestern University in 2003 with majors in journalism and history. She was born in Arlington Heights, Illinois, to parents who immigrated to America in the late 1960s from Hong Kong. She speaks Cantonese Chinese and Spanish.

She also is an athlete, having run a 50-mile ultramarathon, two 50-kilometer ultramarathons, and 18 marathons, including the Pikes Peak Marathon up and down one of America’s most famous mountains. She has a black belt in tae kwon do, which she does with her two children, ages nine and five, with whom she also is learning to play the cello. She is married to Charley Ding.