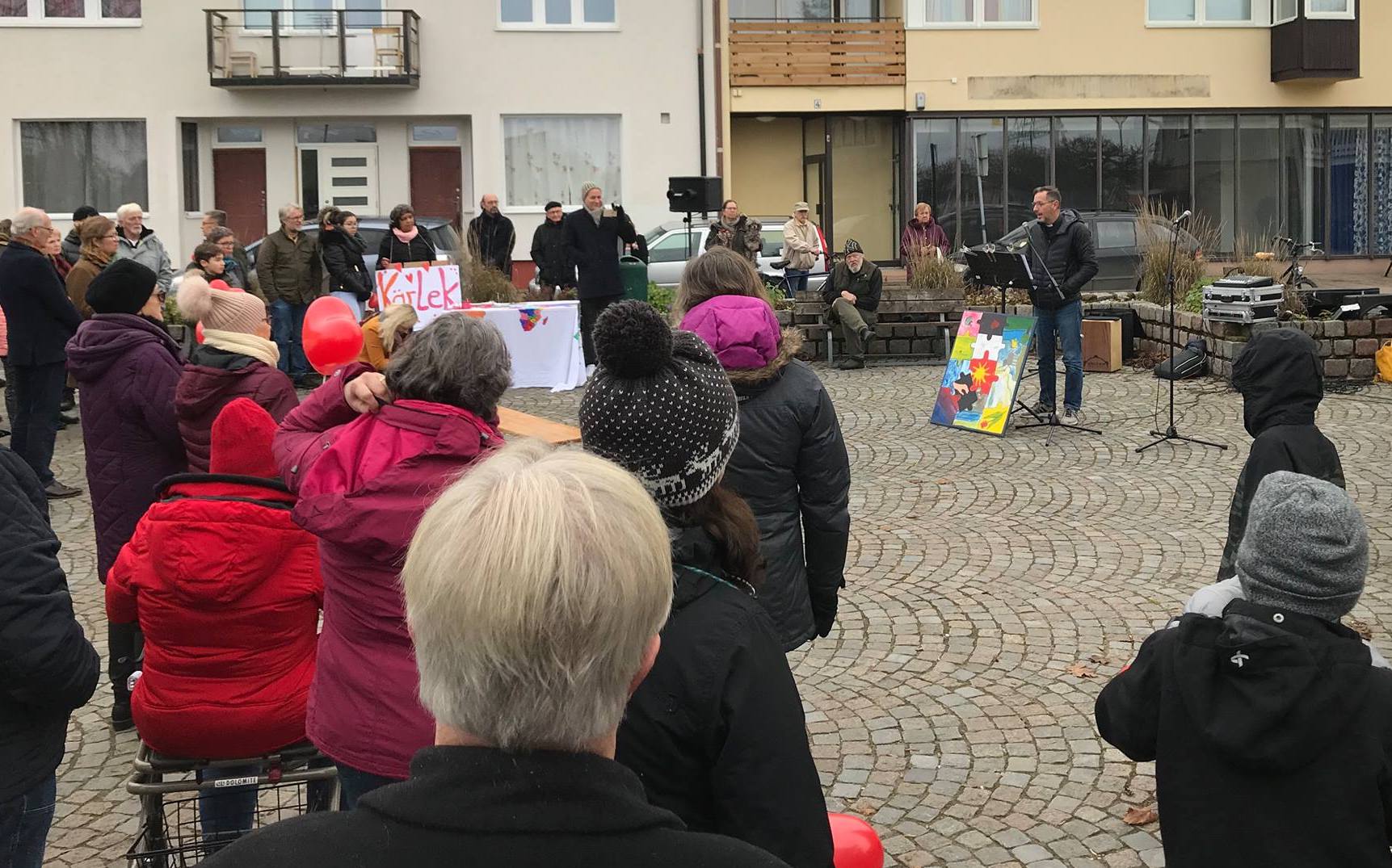 SÖSDALA, SWEDEN (November 30, 2018) — More than 120 people turned out for a rally in the town square organized by Covenant pastor Derek Walles in response to a racist incident. A severed pig head was left on the doorstep of an apartment building where four Muslim families live with a that read, “Go back to where you came from!”

“The rally felt like God was shining the light of Christ in the midst of a dark situation,” said Walles, who pastors Tureholms Church, which is part of the Uniting Church of Sweden. Walles encouraged participants to support the families with “kindness and fellowship.”

The rally was held last Friday. Walles organized the event after one of the families called him the day after the incident, which took place in October.

“It directly affected the four Muslim families living in the five-apartment building,” Walles said. “However, the message was clear.  It was directed to all Muslims living in Sösdala.”

The congregation has built strong ties with Muslim and Christian refugees from different countries since they started arriving in the village four years ago. They offer Swedish language courses, a second-hand room for clothing and essentials for the home, art courses for children and teens, men’s and women’s hobby groups, as well as several musical events to “help them sing their way into Swedish,” Walles said.

‘I really believe that if we are a church that believes in justice, mercy, and compassion we have to stand up for it in ways that might be uncomfortable at times.’

The church also set up a refugee deacon fund. Nearly half of that funding came from ECC churches and individuals in the United States, Walles added. “Through connections in the church and the community, we were also able to find permanent homes and even jobs for several refugees. All of this has given us credibility in the immigrant community.”

Some of the families who live in the apartments attended the rally as did several families from other ethnic groups, Walles said. “Some other immigrants and refugees said they were uncomfortable attending—for a variety of different reasons.”

Prior to the rally, a family came by and asked Walles what the group was setting up for. When he responded that it was a rally for peace and respect, they responded with racist comments, blaming immigrants for the crime and fear in Sweden. Walles said, “I calmly answered them by saying I understand they have fear and worry, and this is why we are having this rally. I told them we want to build up relationships of peace, respect, love, and hope. One woman said she doesn’t believe in hope. I told her hope starts today, and they could come back when the rally started.”

After the event, refugees expressed their gratitude. “I even got a few hugs—from the men of course as hugging the opposite gender in Islam is not allowed,” Walles said. “I did get a few handshakes from the women.”

“I really believe that if we are a church that believes in justice, mercy, and compassion we have to stand up for it in ways that might be uncomfortable at times,” Walles said. “I have gotten some pretty nasty comments from a small few, a good amount of silence or indifference, but also a surprisingly large number of positive and encouraging comments.”