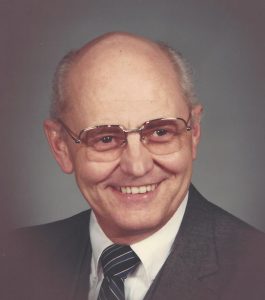 He was born on May 18, 1931, in Clear Lake, Wisconsin, to Ruth (née Gerdlund) and Edwin Ansgar Hallsten Sr.

He married Patricia L. Tornquist on May 8, 1951, in Northwood, Iowa. He served in the Korean War.

He earned a Bachelor of Arts degree from Gustavus Adolphus College, a Master of Divinity from North Park Theological Seminary, as well as a Master of Arts and PhD in psychology from the University of Illinois.

He also worked as a clinical psychologist at the Research Hospital in Galesburg, Illinois; Adler Zone Center in Urbana, Illinois; the Institute for Human Resources in Livingston County, Illinois, where he was the executive director; Agape Counseling Center in Creve Coeur, Missouri; and Janet Wattles Center in Rockford, Illinois.

Ed also served as associate professor of pastoral care and counseling at North Park Theological Seminary and as a state chaplain for the Illinois National Guard. He found especially meaningful his later work with what is now the Alaska Conference of the Evangelical Covenant Church in addressing alcoholism issues and using Eye Movement Reprocessing Therapy to help trauma victims.

He was preceded in death by his son Rand, son-in-law Steve Parks, and one granddaughter.

A memorial service will be held after the first of the year in Rockford, where he lived for 23 years before his recent move to Naples. Burial with full military honors will take place at Arlington National Cemetery at a later date.

In lieu of flowers, the family requests that memorial contributions be made to Minnehaha Academy in Minneapolis, or to North Park Covenant Church in Machesney Park, Illinois.