MADISON, WI (November 1, 2018) – The Nehemiah Center for Urban Leadership, founded by Covenant pastor Alex Gee of Fountain of Life Covenant Church in Madison, Wisconsin, has been awarded a $1 million grant by the Wisconsin Partnership Program with the University of Wisconsin School of Medicine and Public Health. 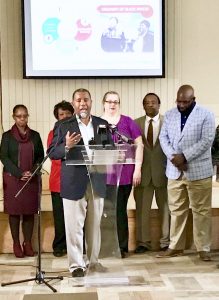 At an Oct. 24 press conference, Covenant pastor Alex Gee announced that his non-profit organization had received a $1 million grant.

The Nehemiah Center, a faith-based, non-profit organization focused on reducing racial inequities through its Justified Anger Initiative was one of four recipients. Money from the grant will help address stress-related health issues in the African American community.

The Community Impact Grant, which provides the $1 million over five years, will help expand the Nehemiah Center’s ongoing work through a project titled “Reducing Health Inequity through Promotion of Social Connection.”

In an article in the Wisconsin State Journal, Gee explained, “African Americans from all economic backgrounds face stressors from both systemic and implicit racism. If the Justified Anger Initiative can help our white allies to dismantle racist systems on their side…while we build networks in the black community, we can reduce this stress that’s causing health problems.”

Gee is committed to the work of revealing hope and grace in every sector of the city of Madison. The Justified Anger movement was named after a stirring viral essay, he wrote about growing up black in Madison.

“For many people, a city like Madison is the epitome of a progressive, post-Christian community,” Gee told Covenant Newswire. “But we’re seeing God at work in this city as we seek new ways to serve and meet the needs of the people here.”

The church’s outreach must look different in today’s society, Gee added. “As we show we care for the entire person, it gives us new opportunities to share our faith. This is a part of our Christian witness.”

In 2014, the Covenant Companion featured an extensive interview with Gee about his work with the Justified Anger movement.