GALESBURG, IL (September 10, 2018) – Carol Ortery had intended to paint 10 scenes from the Old Testament along a wall in the Galesburg Covenant Church in 2012. That has stretched to 106 scenes for the Old Testament, 115 for the New Testament, and still counting.

The project kept growing as Ortery, who has attended the church for 24 years, delved into her Bible and kept coming across story after story she deemed too important to leave out.

The scenes ultimately will stretch across the 96-foot wall. The project begins at one end of the hall with the words, “In the beginning.” She plans to end it with Jesus’s ascension.

Each square foot represents an hour to an hour-and-a-half of work. They are hours that Ortery once thought she would never have. She was diagnosed with breast cancer and given a 5 percent chance to live the next six months. At the time, she was painting a stone border across the bottom of the children’s library. Ortery was halfway through the project when she received the diagnosis. “I was sitting there in the middle of the room and crying and thinking that this was going to be my legacy.” Then she sensed God telling her that she would live. She had no doubts after that.

She has spent nearly six years painting the Old Testament. When she was asked to include some New Testament scenes for part of the church’s 150th anniversary service in August, she had to increase her pace.

She didn’t start those paintings until this past June. “I’ve gotten very good at painting fast,” she says, laughing. Ortery “got a crash course in the New Testament” as she read through a Bible that arranged the stories in chronological order.

For each scene Ortery does significant research. She repainted part of the Israelites crossing the Jordan River after she read that the priests carried the Ark of the Lord on their shoulders and not their hips.

She sketches each scene to scale on paper before setting brush to the cinder-block canvas. Because the cinder block would absorb paint, she first had to prep the entire wall before starting any of the work.

Ortery says she gets the most joy from the project when children see the pictures and want to tell her the story behind them.

Lance Davis, executive minister of Develop Leaders, saw the mural when he attended the anniversary event. “It was just amazing,” he said. “It blew me away.” 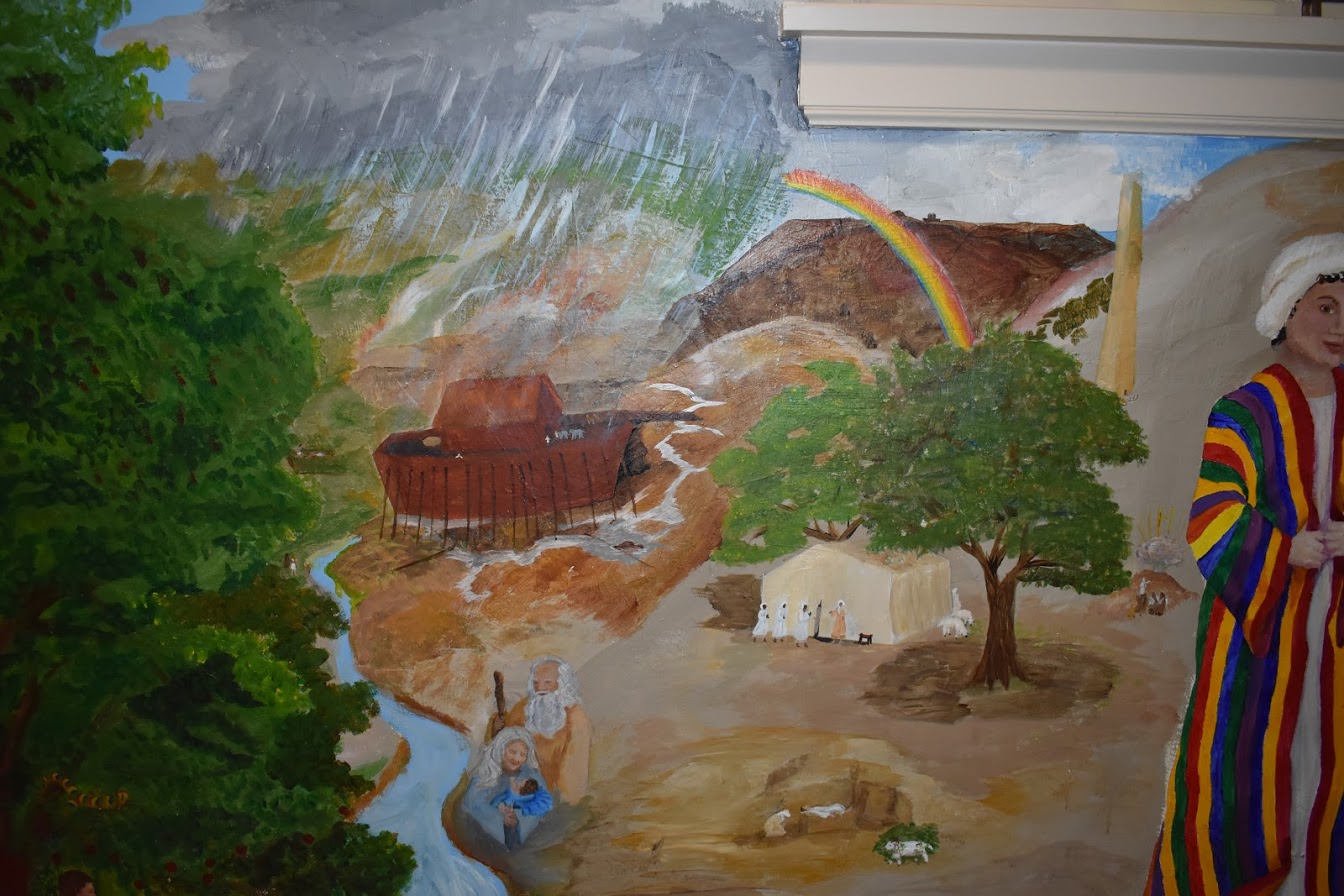 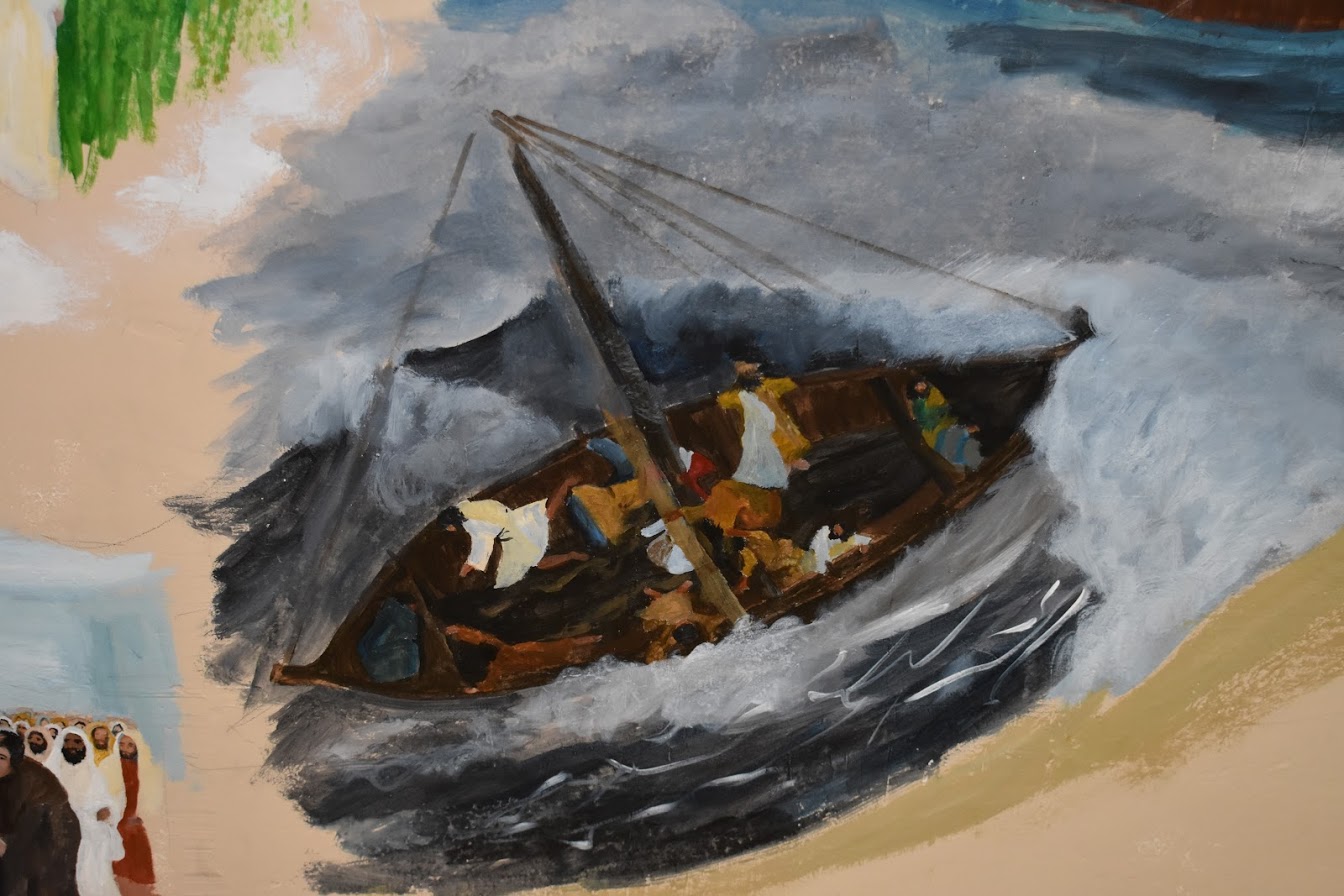 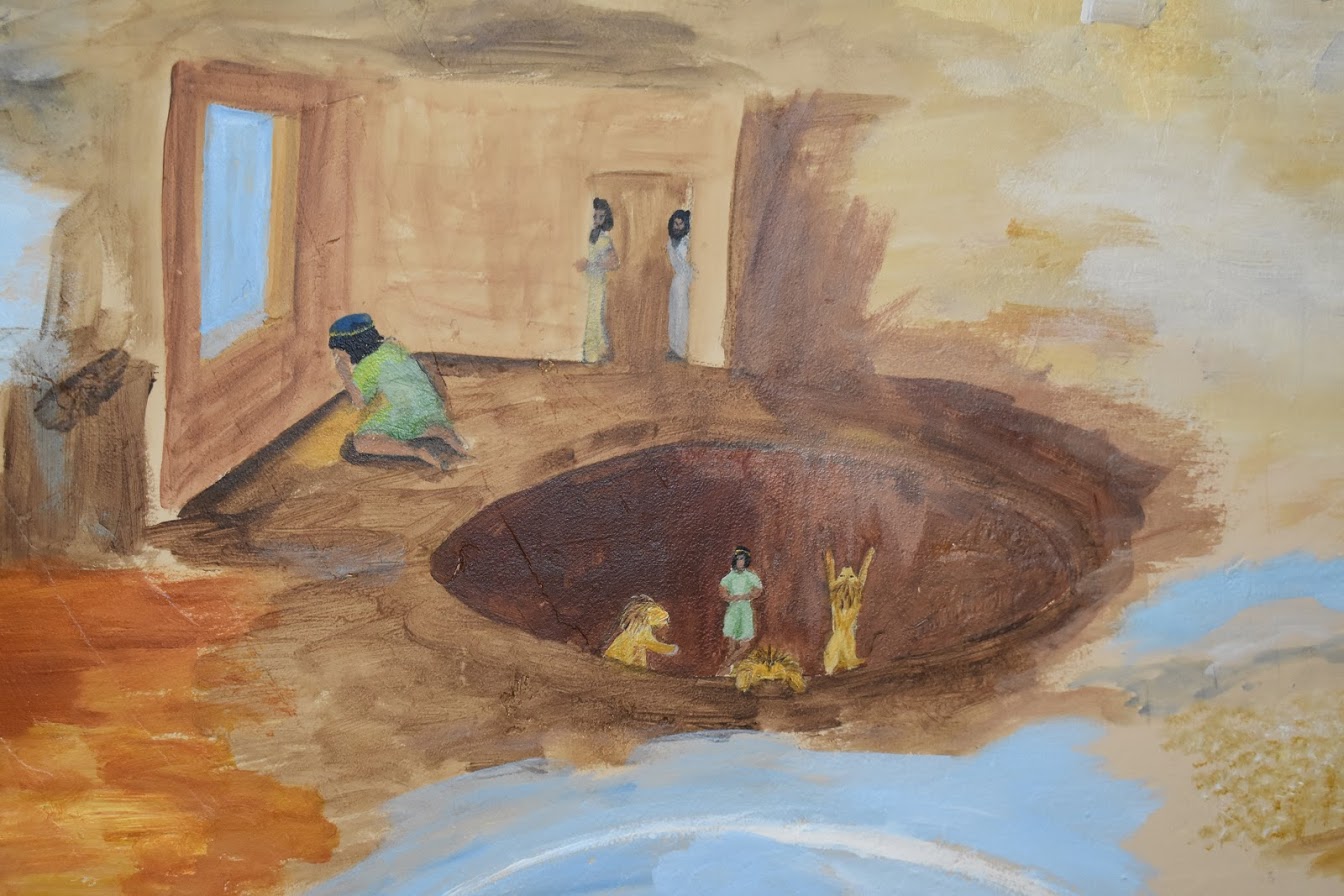 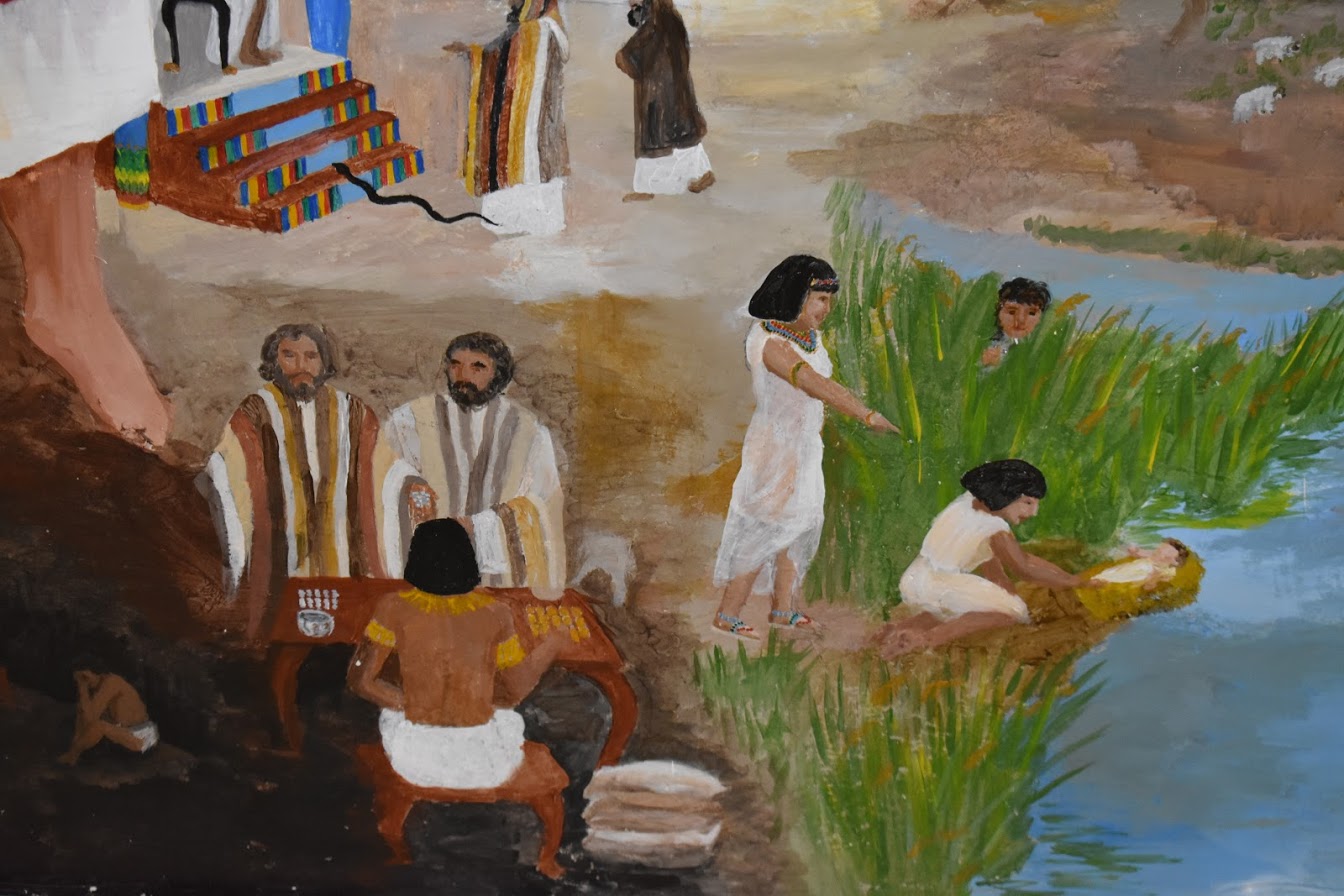 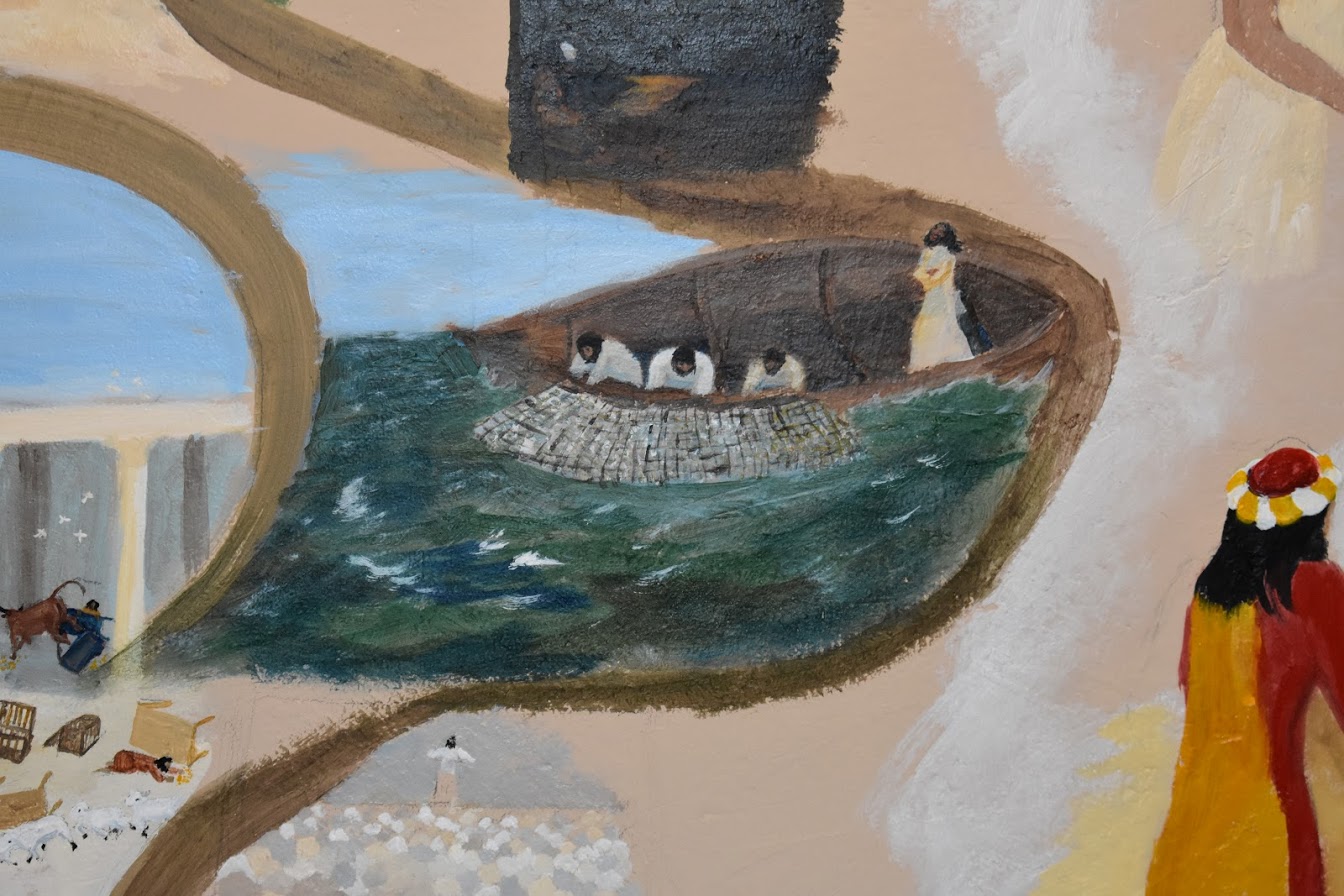